Precommitment Is Powerful, or Why You Should Be Like Odysseus 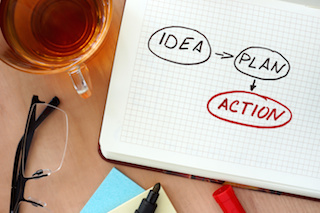 Most of the time, we wield willpower like a holstered gun with the safety off. Temptation rears — an ice cream bar, perhaps — and we whip it out, firing blindly and wasting more than a few bullets in the process. The temptation is beat back, and the ice cream goes uneaten, but the willpower that remains is depleted and less effective in subsequent encounters. And the same thing happens every time we’re faced with a decision. That’s a sloppy way of dealing with the constant stream of temptation the modern world presents.

Consider how Odysseus handled the ultimate temptation in Greek mythology. As legend had it, any man who sailed past the island of Anthemoessa would be drawn toward and broken upon the rocks lining its shores by the irresistible song of the Sirens who resided there. No man could resist, and so Odysseus plugged his men’s ears with beeswax and tied himself to the mast with strict orders that no matter what he said and how much he pleaded, he was not to be untied. He didn’t want to be shipwrecked, but he also didn’t want to miss out on hearing the song. Binding himself to the mast before the call rang out was a basic form of what behavioral psychologists call precommitment.

In the modern world, temptation abounds and beeswax in the ears doesn’t work. Willpower only lasts so long, and powerful forces (food chemists, advertisers) actively seek to sap yours. Research indicates that precommitment — removing a future choice from contention and/or making future commitments to avoid temptation before it strikes — is more reliable than willpower, actively preserves it (for later use when you really need it), and helps everyone, especially the people with impulse control, make better decisions. And it’s this population — the high impulsivity group — that’s most at risk for obesity. They eat the most fast food, too, because that stuff looks good and it’s right there and you’re tired and just this once can’t hurt, can it? But with improved impulse control, the obese are able to lose weight and those who’ve lost weight are able to keep the lost weight off.

Precommitment to healthier choices, then, may be an essential tool in the modern world, and a more reliable one than relying on sheer willpower.

Well, precommitment is most effective when willpower fails, or will fail. To figure out when and how to use precommitment in your own life, simply consider the areas in your life where willpower doesn’t work as well as you’d like.

You sit down for a meal and a restaurant known for its complimentary bread. Don’t wait till those crusty, fragrant, just-from-the-oven slabs of sourdough are on your table within easy reach to refuse them. You’ll probably fail, and the sapping of willpower required to prevent failure will make subsequent resistance to dessert futile. Decline the bread basket from the start, preferably before it even makes an appearance.

You find yourself opting for takeout more and more every night after work because cooking seems like a chore and, by dinner time, your willpower is exhausted. You’re eating good takeout, but it’s still eating into your budget and you don’t get to exercise as much direct control over your food as you’d like. There are a few ways you can handle this using precommitment. You could plan the week’s meals ahead of time and gather the necessary ingredients on the weekend so you’re ready to go each week night. Go a bit further and prep the cooking area, chop the veggies, and mix the spices every morning before work so that you can come home and launch immediately into dinner prep.

You’re a digital nomad, working on your laptop from home, cafes, or any place that’ll have you. It’s a great way to make a living and affords a lot of freedom, but you’ve also got a procrastination problem. Whenever you can, you manage to find something else on the Internet that’s more interesting, or at least less demanding, than the task at hand. If you don’t actually need online access to do the bulk of your work — maybe you’re a writer or content creator — find a place to work that doesn’t have Internet, like a park, a beautiful hiking trail (I actually know a guy who frequently uses his laptop out in the woods), some hipster cafe that’s opted not to feature wifi to foster more face-to-face interpersonal communication, or even your backyard or office with the wifi turned off. If you do need online access for your work, use a program like Self Control to restrict access to tempting websites.

Some people thrive on spontaneous workouts. If they feel like working their legs, they’ll find the time to sneak in some squats and Romanian deadlifts. They’ll take a quick detour over to the park at lunch to do some pullup and pushup supersets. Maybe they’ll even sprint back to the office. Their innate drive to move and train is high enough that precommitting to a workout isn’t just unnecessary, it’s stifling. Most people are not this way (just look at the rates of sedentism) and will benefit from precommitting to an exercise schedule. Say you’re about to perform some sprint intervals on the stationary bike. You could hop on without any plans and just “go till you feel like stopping” (something I actually do from time to time when I only have a few minutes available), or you could precommit. In the bowels of an intense interval workout, your willpower will be seriously tested and sapped, and going in without that precommitment to a set amount of work is going to leave you open to premature cancellation. Some work is better than none, but deciding at the start to do 10 rounds will make you more likely to endure the pain and finish the full 10.

You can’t handle everything this way, obviously. Temptation’s just too unpredictable and omnipresent. And even if it were possible to use precommitment to overcome every temptation that might arise, that kind of micromanagement of everyday life would drive a person mad. That’s no way to live.

The Primal Blueprint is the ultimate framework for precommitment. By hewing to a set of principles — avoid/limit grains, seed oils, refined sugar; eat colorful plants and healthy animals — you stop, or at least slow, temptation in its tracks. It never has a grasp on you because you’ve already committed to the Primal way of eating. And because we don’t have the luxury of plugging our ears to block out the temptations offered by the modern world, our best bet is to make like Odysseus and secure ourselves to a healthy way of eating and, most importantly, analyzing food and behavior decisions.

To me, the case for intelligent and targeted usage of precommitment is clear. The world is crazy out there. It’s unpredictable. And sometimes you’re going to need willpower to overcome obstacles. Why not precommit to abstaining from, avoiding, or limiting the temptations we know about so that when spontaneous situations erupt, our willpower is readily available?

I’m interested to hear how everyone out there uses precommitment to handle temptation, even if they don’t call it that. What’s worked? What hasn’t? What kinds of temptations have you used precommitment to overcome? Let me know down below, and thanks for reading!