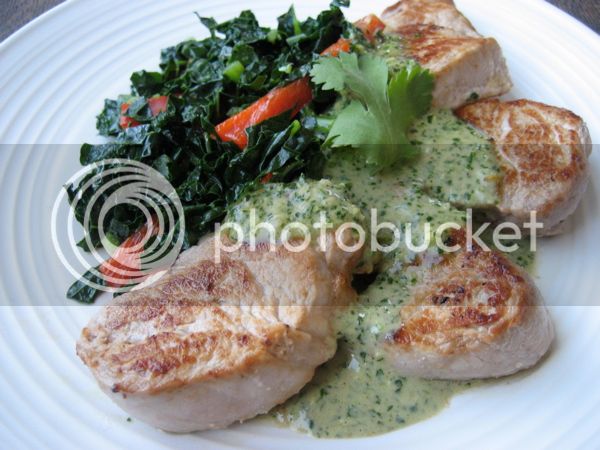 What drew us in to the pork recipe submitted by Susan Rosenberg (for the Primal Blueprint Cookbook Contest) was not the pork itself, although any meal involving pork tenderloin is bound to be good. The pork preparation is simple and straightforward, involving nothing more than searing medallions in a pan. It is what Susan serves with the tenderloin, a creamy variation of pesto with flavors ranging from slightly spicy and sweet to cool and pungent, that makes us swoon.

As much as we like this pesto with pork, we immediately started thinking about all the other foods we might pair it with. This led to mixing some pesto in with a little shredded cabbage that happened to be in the fridge, and the result was a killer coleslaw. It’s just as easy to imagine serving the pesto over steak or seafood. What, exactly, makes it so versatile? First of all, you’ve got to love cilantro, an aromatic herb that people tend to have very strong feelings about.

From a distance, cilantro can easily be mistaken for parsley, but when you look at cilantro closely, the leaves are flatter and more feathery. Cilantro has a perfumed (some might say soapy) aroma and fresh, clean flavor. Those who love it will put it on just about anything, although the cool flavor makes cilantro especially delicious with Asian, Indian and Mexican dishes. Those who hate cilantro won’t even let it come near their kitchen. If you fall into this category, try the pesto with a different herb, like mint or parsley. You might also consider joining the Facebook group “I Hate Cilantro,” where you can get moral support from more than 700 members.

But if you love cilantro, you’re not going to be able to get enough of this pesto. Although Susan’s right, a little bit goes a long way, so you can make one batch and save half for another meal. The rich texture and bold flavor add an addictive flavor to the pork tenderloin or whatever you choose to serve it with. While the flavor mostly comes from the cilantro and ginger, the almond butter and coconut milk add just the right amount of creaminess.

Slice the tenderloin into rounds of 1-inch thickness. Mix oils and vinegar, add garlic and ginger.

Marinate the pork slices in a non-reactive glass container for at least 2 hours or overnight, turning at intervals to marinate both sides of the slices. When the pork is ready to cook, prepare the pesto below:

To cook the pork, heat some coconut oil, lard, or olive oil in a large skillet over medium-high heat. Quickly sear the slices, turning once, until just cooked through. Do not crowd the pan, cook in batches as needed so they sear and don’t steam.

Keep each batch warm in a warm oven or covered in foil wrap.

To serve: Put a few slices of pork on a plate with a little bit of pesto on each slice, or serve pesto on the side. (A little pesto goes a long way, flavor-wise.)

Serve with cooked greens with sesame seeds and sliced red peppers for a nice color combo.