Leave it to the French to create a dish that tastes and looks incredibly gourmet even though it’s made from not much more than ground meat. Making pâté de terrine does not take extraordinary culinary skills or exotic ingredients, but the results are impressive and extraordinarily delicious. Well-seasoned, fatty meat is combined with egg, whole cream and brandy for added richness and flavor and then – this might just be our favorite part – the whole thing is wrapped in bacon. Once the pâté de terrine has been baked and then chilled, it’s sliced thinly and served with mustard and cornichons (that’s French for gherkin) on the side.

As the name suggests, pâté de terrine (often shortened to just “terrine”) is pate that has been baked in a container called a terrine, which is basically a long, thin loaf pan. If a terrine sounds familiar even though you aren’t well-versed in French cuisine, then you might be thinking instead of a terrine’s distant cousin, meatloaf. Meatloaf is like the lazy man’s terrine. Meatloaf takes less time to make, is eaten hot right out of the oven and has a texture closer to a hamburger than a smooth, dense pâté. Think of a terrine as the ultimate meatloaf: more meat, more fat, more flavor.

Rabbit, pork, veal and duck are the most common meats used in a terrine and while you can use just one, we recommend blending at least two types together. Pork (such as ground pork shoulder) is almost always blended in because it adds flavorful fat. Liver of some kind is usually included as well, for texture and a rich, meaty flavor. It is not uncommon to add nuts or chunks of meat to the ground meat and if you want to be really traditional, a layer of aspic covers the whole thing. Aspic is a completely clear, savory jelly made from gelatin and clarified meat stock. Making aspic is very time consuming and these days it covers terrines only to make them look pretty. Back in the days before refrigeration, aspic acted as a barrier between the meat and the air, preventing (or at least slowing down) spoilage. In fact, it’s likely that pate came about not because the French were trying to come up with a fancy appetizer, but because the best way to use up old, leftover meat and preserve it for eating later in the week was to season it heavily and cover it with lard and then aspic (or bread, as in pate en croute).

Since all of us have refrigerators and since aspic doesn’t add flavor to the terrine but adds a lot of work, we decided to skip it, and keep things simple but still authentic by just covering the terrine with pork fat (i.e. bacon) instead. For the record, seafood and vegetarian terrines also exist, but if we’re going to go through the trouble of making a terrine, we can’t imagine not using lots of meat and wrapping the whole thing in bacon. We thought you’d agree.

So back to the meat…we chose to use ground pork and beef and chicken livers for this recipe, but if you have access to rabbit or other game, it’s a flavorful substitution for the beef. The livers are blended until smooth in the food processor, but the rest of the meat is ground the same texture as meat for a meatloaf. If you don’t have a terrine pan, then a regular loaf pan works pretty well. Simply line it with bacon, spoon in the meat, cover with foil and bake. Then, you have to have a little patience since the rich and sliceable texture of a terrine is achieved by chilling for 24 hours with weight on top to press the meat down.

The French believe that good food is worth any amount of time and effort, and when it comes to terrines, we have to agree. There is a time and place for meatloaf, but nothing compares to a slice of terrine.

Sauté onion in butter over medium heat until translucent but not browned. Scrape into a bowl and let cool.

Pulse liver in a food processor until smooth and then transfer to a bowl. With your hands or a large spoon, mix the liver with the ground pork and beef, onion, garlic, thyme, salt, pepper, nutmeg and allspice.

Whisk together brandy, eggs and heavy cream. Stir into meat until completely combined.

Line bottom loaf pan (or terrine pan, if you own one) crosswise with strips of bacon, laying them as close together as possible without overlapping. Leave a 1 to 2 inch overhang of bacon on one side.

Fill the pan with half of the meat mixture, taking care not to move the bacon on the bottom. Sprinkle the pistachios nuts on top then cover with the remaining meat. 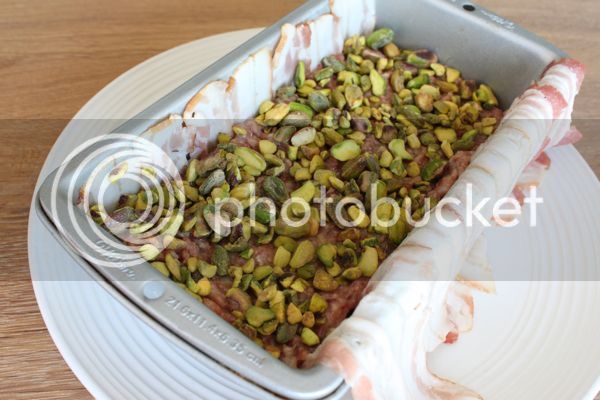 Cover the top of the terrine lengthwise with three strips of bacon then fold the overhang of bacon over the top. The terrine can be refrigerated up to 8 hours before baking it and although optional, this step will help meld and intensify the flavor. 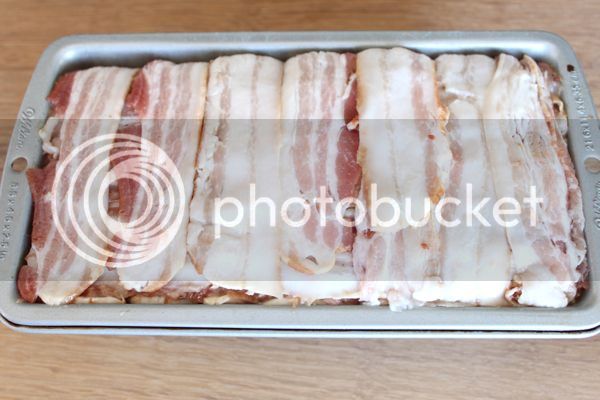 Bring a large pot of water to a boil.

Cover the loaf pan with three layers of tightly sealed foil (if your terrine pan has a lid, foil isn’t necessary). Put the loaf pan in a large, deep roasting pan and set it on a rack in the oven. Pour the boiling water into the roasting pan, surrounding the terrine in a water bath.

Bake 1 1/2 hours, or until a thermometer inserted into the center hits 150-155 degrees F. Remove the terrine from the oven, remove the foil, and let it rest 30 minutes.

Put a piece of parchment or wax paper over the terrine. On top of the parchment or wax paper, put a thicker layer on which to set some cans or other weight – a piece of cardboard covered in foil and cut to fit exactly over the meat works well. On top of the cardboard, set a few cans, weights, or bricks. The weight presses down on the meat, making the texture dense and sliceable.

Cool the terrine at room temperature for an hour or so then place it in the fridge (with the weight on top) and chill 24 hours.

Remove the weight. Run a butter knife around the edge of terrine to loosen it then let the loaf pan stand in 1 inch of hot water for a minute to loosen the bottom.

Wrapped tightly in plastic wrap and refrigerated, the terrine will keep 1-2 weeks.