It’s Friday, everyone! And that means another Primal Blueprint Real Life Story from a Mark’s Daily Apple reader. This week’s featured testimonial is one of many success stories spurred by Primal Blueprint Publishing’s upcoming release, The Paleo Thyroid Solution, by Elle Russ.

If you have your own success story and would like to share it with me and the Mark’s Daily Apple community please contact me here. I’ll continue to publish these each Friday as long as they keep coming in. Thank you for reading!

I developed an eating disorder when I was twelve. Fifteen years later, the anorexic, bulimic, binging behaviors had taken a serious toll on my body and my health. I gained and lost hundreds of pounds during this time and my yo-yo dieting, rapid weight gains and losses, and horribly misguided nutrition left me feeling like, well…absolute sh*t.

I started a stressful corporate job after college and things went downhill from there. Late nights, tons of caffeine, and chronic cardio (in an effort to “finally get my butt in gear”) only did further damage to my body. For the hundredth time, I tried eating less and exercising more in an effort to lose weight. For the hundredth time, it did not work. I could not sustain the calorie restriction and exercise it took to lose and keep off weight. I would burn out, and as soon as I went back to normal calorie consumption the weight would pile back on. The more I repeated this cycle, the less it worked. Losing weight was an epic battle, and it would come back on seemingly overnight.

When my boyfriend (now fiancé!) introduced me to the ancestral health field (hat tips to Mark Sisson, Robb Wolf, and Angelo Coppola), the approach to nutrition seemed crazy enough to actually work, so I gave it all a try. I changed the way I thought about, bought, prepared, and ate food. Food quality increased, I cut out gluten and processed foods, and I cut back on alcohol and sugar. I eliminated all but high-quality, high-fat dairy. With these changes alone, I dropped about 15 lbs.

Aside from the weight loss, which plateaued, everything else kept going downhill. As part of my corporate job, I took international assignments in both Montreal and Costa Rica. Living abroad added more stress to my life, and my inability to handle the anxiety and depression I felt meant I was overwhelmed all of the time. I had no energy. Sleeping ten or more hours a night left me feeling exhausted and drained. I had to set multiple alarms just to get myself up in the morning, and my caffeine intake gradually increased to boost my alertness. Getting through the week became harder and harder as my energy levels went lower and lower. My hair was so dry and brittle that it would break off in my hand when I ran my fingers through it, and it had all but stopped growing. My fingernails were thin and flimsy and ripped constantly, and my skin would be cold to the touch, even under layers of clothing.

I had absolutely no endurance. Intense exercise left me with numb lips and heavy legs, and I couldn’t explain why. I would drudge up the energy for a workout, but after about thirty seconds of high intensity I would have to stop. I tried to push myself through this point several times, but it resulted in seeing stars and getting dizzy. It was as if someone had completely drained my energy tank. I was thirsty all the time. My pee was clear, but drinking water didn’t make me feel hydrated. Digestively, things weren’t going so well either. I pooped once a week, maybe. At the age of twenty-five, I had hemorrhoids that showed up pretty regularly due to constipation (but this was normal for me, and at the time I didn’t even recognize this as an issue).

In 2012 my hair was breaking off daily and was the texture of straw.

The most acute and worrying symptoms for me were mental and cognitive. Mentally, my memory was so poor that if I didn’t write down a phone number, appointment time, name, or task immediately, I would forget it. I asked myself daily, “What is wrong with me? Am I stupid?” My job consisted of numbers and spreadsheets, but I couldn’t read them in the right order and constantly mixed up digits. Emotionally, I was anxious and depressed. I felt overwhelmed by the simplest things, and my heart rate would skyrocket with stress. It took less and less to get me worked up, and I often ended up in tears. I started getting hives as a result of the anxiety.

I went to my doctor, looking for answers, and he ran a few tests. He concluded that all was well and left me with a quick message: “You’re fine. You just need to eat less and exercise more to lose the weight. Try a low-fat diet…and work on managing your stress. If you want, we can try antidepressants.” It was a message I had heard before, but it didn’t feel like the right answer to me anymore. I was armed with enough ancestral health knowledge at this point to know that something wasn’t right.

I found a naturopathic doctor who was willing to work with me. After hearing my symptoms he said it was most likely that I was hypothyroid. We did a comprehensive blood work panel and an adrenal salivary test.

Below are the first results of my thyroid test.

My adrenal panel came back with pretty advanced adrenal fatigue, and a picture started to come together. After reviewing everything, the “official” diagnosis was adrenal fatigue and malnutrition from a lifelong eating disorder. What about a thyroid issue?

“No,” he said, “your thyroid tests do indicate suboptimal thyroid status in my opinion, but nothing that I would deem to be abnormal.” (Direct quote from an email exchange we shared.) We started a supplement regimen, and I saw some improvement to my energy levels as my adrenal glands received back-up from the adaptogens, adrenal complex, vitamins C and B12, magnesium, multivitamin, and Celtic sea salt I was taking. I quit caffeine, and things improved a bit more. My weight stayed put, and this doctor also told me that my issue was willpower related, that I should focus on eating less and exercising more (though to his credit, he did not recommend chronic cardio). I was getting pretty sick of that being the only answer, and I constantly questioned why I struggled so much against my body.

In September 2014, I met Elle at Mark Sisson’s PrimalCon event, and my life was forever changed.

I overheard Elle talking to someone about her own thyroid story, and my interest was piqued. I had heard of hypothyroidism and had started doing some research about it after my own thyroid was tested, but I knew almost nothing. I approached her and explained where I was and how I felt. We spent the next couple of hours talking about thyroid and adrenal health, and why the conventional medical system so often fails hypothyroid patients. Elle told me exactly what blood tests to get, and she helped me find an NDT (natural desiccated thyroid)-friendly doctor in Chicago. We also talked about things I could do in the meantime to start supporting my adrenals and body. She truly empathized with me, and she was adamant that my situation was not hopeless and that she would help in whatever way she could to get healthy again. She was so encouraging and positive about my future, even when I could not see the silver lining.

I left California with hope, for the first time in a long time, that I could feel better.

Back in Chicago, I saw an NDT-friendly doctor and he retested everything. I took a twenty-four-hour cortisol test, and it was clear I had major cortisol/adrenal issues. The doctor wanted to treat my adrenals first to see if my thyroid function would resolve. Five months after starting adrenal supplementation, my thyroid picture didn’t change much.

My doctor agreed to start me on NDT to see how raising my levels would improve my symptoms and adrenal function. We started with 1/2 grain of NDT in November, and I gradually raised my dosage over the next several months. By May I was on 3 grains, and I was starting to see and feel massive changes in my body and my mind.

My hair started growing, and it became shiny and strong again. My nails stopped cracking. I started pooping every day (and man, that makes such a difference, especially without hemorrhoids). My memory improved. My ability to problem-solve came back. My family and friends noticed an improvement in my mood and behavior. I felt as if I could handle being social without feeling so overwhelmed (something I had attributed to becoming increasingly shy with age). I felt witty again. I started sleeping soundly for eight hours and bouncing out of bed in the morning. I started seeing an improvement in things I didn’t even realize were issues. My eyelids weren’t puffy in the morning anymore. My thirst level went down. My sex drive increased! And my PMS symptoms (cramping, bloating, flow, mood swings) and anxiety all decreased. While I still occasionally get hives, it is a rare occurrence these days. Weight-wise, I’ve lost about 10 additional pounds since May 2016. The weight has come off very gradually (and all from around my midsection), and I have changed nothing about my diet, which is a whole foods–based, gluten-free, lowish carbohydrate diet. Now that my energy is up and my endurance is back, I am able to be back in the gym, lifting weights and sprinting. 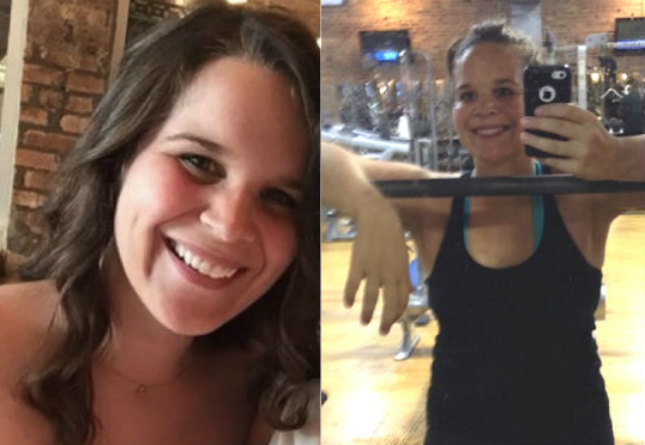 In addition to all the work that I’ve done to get myself physically back to health, I’ve also done a tremendous amount of inner work to heal the emotional eating and emotional attachment behaviors I had related to food. I even became certified as an Eating Psychology Coach to lead myself through the waters of emotional eating, and now I coach others through these waters as well. In the last two years, I have changed jobs and careers, moved, and let go of people or things in my life that caused more stress than they were worth. I decided to place my health as the first priority in my life. Now, for the first time ever, I feel like all the pieces of my health are moving in the right direction together. Progress has been slow, and I’ve also had to exercise patience throughout, but I am determined to keep moving forward. Elle was the missing piece for me in my confusing puzzle of mental, emotional, and physical health.

I feel like a new person! Elle helped me understand certain tweaks in dosing and offered ideas about how and when to take my NDT to further optimize my situation. Elle has been an amazing resource along the way, supporting me on this path to better health. Without Elle believing in my story when my doctors would not, my life would be much different than it is today. I am now pregnant with my first child, weeks away from delivery, and I have gained only 17 lbs—everyone is amazed at how good I look and feel. I have lots of energy, minimal hormonal or mood swings, and stable weight. I am still exercising every day and even heavy lifting! My current NDT dose is four grains (two grains in the morning and two grains in the afternoon), which is up from three grains since the start of my pregnancy. I am so happy that I feel this great! Thank you Elle!