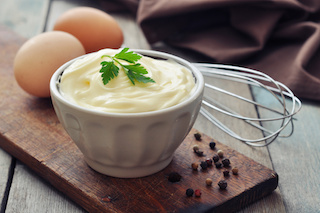 In a few short months, my team and I will be unveiling a new product that I’m confident you’ll be very interested in consuming. No, it’s not a book. It’s not an ebook, either, nor is it a new certification program or supplement. It’s something you eat – something you literally consume with your mouth. It’s a food product for which people have been clamoring and combing the grocery aisles, both brick and mortar and virtual, in vain. It’s mayo.

We’ll be releasing a Primal mayonnaise using avocado oil as the base.

Today, I want to tell you the story of how we arrived at the forthcoming mayo, and why we found that “organic” isn’t always what it’s cracked up to be. (And don’t miss your chance to win a free bottle of Primal mayo. See the details at the bottom of this post.)

It started, as many great endeavors do, with Ultimate Frisbee.

One of my Sunday Ultimate buddies is a younger guy, early 30s, recently married. We’ve been playing together for a couple years now, and because of the constant exposure to me, he’s gradually gone more and more Primal – no small feat, seeing that he started vegetarian! He’ll pick my brain, ask me little things here and there (in the vein of “So, Mark, are flax seeds good for you?” or “Can I still drink milk?”) that were easy enough to answer between points.

But one stumped me. His wife was pregnant and really wasn’t into seafood. Since I’d stressed the importance of fatty fish for a growing fetus, he needed a way to make fish palatable for his wife (and future child). There was only one way she was willing to eat it: tuna salad. And not some Primal version of tuna salad using olive oil and balsamic vinegar. She wanted classic tuna salad dripping with mayo. Only problem, of course, was the sorry state of commercially-available mayonnaise. It’s all soybean oil. So his question was simple: is there an easy way to get good mayo?

Mayonnaise is kind of the white whale of the Primal/ancestral community. Go to any popular forum or blog and you’ll find someone asking “Is there an approved mayo I can buy?”

Not really. There’s one that combines a ton of different oils (coconut, sesame, olive, and more), but it’s really expensive and tends to separate and get all runny and strange.

“Just make your own!” people will say, and yeah, maybe you make mayo once or twice and it’s great. But there are major downsides. First, it’s fairly labor intensive. Sure, whisking is a great forearm workout but it can become torturous if you’re making more than a cup’s worth. Blending is faster, but you lose a quarter of it in the blender and another quarter in your arm hair scooping it out. But mainly, fresh mayo doesn’t last very long in the fridge, so you can’t keep a big batch on hand. And good luck whipping up mayo at midnight when pregnancy cravings take hold. Everyone likes the idea of making their own mayo, but very few people actually go to the trouble.

So my buddy’s quandary got me thinking: why isn’t there a good, affordable Primal mayo on the market? How many fish-averse but tuna salad-besotted Primal or paleo folks are going without a steady source of healthy, fatty fish flesh because of the commercial mayo situation?

A ton, as market research revealed. Fish aversion is one of the most common in the community. Good mayo is important for these people. I’ve tried and I’ve tried to make a mayo-less tuna salad that everyone likes, and it’s impossible. I know about a dozen other people who hate seafood, except for tuna salad. With a quality mayo you don’t have to consider a concession, that person can easily get their omega-3s and other seafood nutrients.

The search was on, then. This was to be a mass market mayo. A mayo for the everyman. A mayo that rekindled memories of mom’s tuna salad sans the oxidized cholesterol. We tried different recipes. Extra virgin olive oil wouldn’t do; we weren’t making an aioli and the oil had to complement, not take over the food. Coconut oil didn’t work; it was too saturated and solid at normal room temperature and the virgin oil made it inedibly coconutty.

We settled on avocado oil. It had a neutral flavor, at least in its final mayo form. It maintained good texture when refrigerated. And, as you’ll see below, it had some unique nutritional benefits.

From the start, we wanted Primal svocado mayo to be organic. Wholly, fully organic. But after extensive research we’ve found that not only is not cost effective (would you pay $15-20 for a jar of mayo?), it’s really not necessary from a health perspective. Let’s take a closer look.

First, mayo is oil-intensive. Mayonnaise is basically all oil with a bit of acid, some salt, some spices, and some egg. The rest is all oil. If you’re Hellman’s and you’re working with GMO soybean oil, price isn’t a problem and it’s why you can get a gallon of the fluffy off-white stuff at Costco for five or six bucks. If you’re using a premium oil like avocado where the price skyrockets for every additional ounce of oil required in the recipe, it adds up fast.

Go with a blend, you might suggest (and some people did). But we didn’t want to do a blend. You’ve probably run breathlessly up to a jar of “Olive oil mayonnaise” in the grocery store only to flip the label and see that it’s half canola. We were against that. That’s a terrible experience that no one should have to live through. Besides, we wanted pure avocado oil with a ton of health benefits and flavor that we didn’t want to dilute. And more importantly, it’s highly protective against inflammation, metabolic syndrome, and other issues we’d like to avoid.

But what about the pesticides? I mean, I just wrote a post questioning the validity of the supposedly safe daily pesticide intakes laid out by the EPA – and now I’m contemplating a mayonnaise recipe whose primary ingredient is non-organic. What gives?

As pesticides go, the literature on imiprothrin is reassuring. Inhalation of an imiprothrin-based insecticide is bad. In a study out of Egypt, rats were placed in rooms and subjected to an over the counter imiprothrin-based insecticide. Every minute, an overhead attachment sprayed aerosolized imiprothrin for 30 seconds. This went on for 15 minutes, after which the rats were shut inside for another 15 minutes. The whole process happened three times a day for 2, 10, or 30 days. These rats were basically hot-boxing a room with imiprothrin displacing much of the air for up to a month, and it didn’t quite kill them. It damaged their lungs extensively, but they survived until being sacrificed by the researchers.

And remember: only 1.1% of avocado samples showed evidence of residues of this stuff, and avocado oil showed none. In other words, the cost of using organic avocado oil simply isn’t justified.

So that’s the story of Primal avocado mayo.

There may be some other Primal sauces, dressings and toppings coming, too. You’ll just have to wait and see.

We’ll do a full unveiling when it’s ready for shipping, but I couldn’t wait any longer. You’re really gonna like it, and I can’t wait to see what you think.

To mark this unofficial announcement, I’m giving you a chance to win a free jar!

Get your hands on the the very first batch of Primal Kitchen Mayo by entering our sweepstakes using the widget below. Simply share the news about the upcoming Primal mayo via Twitter, Facebook, Instagram, or your blog, and you’ll earn sweepstakes entries. You can enter as many times as you’d like over the course of the next 4 weeks.

(The sweepstakes ends on Jan. 7. Only continental U.S. residents are eligible to win. Sorry everyone else!)

Thanks in advance to everyone that participates and helps spread the word!