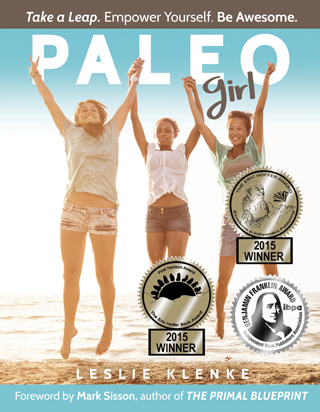 This is a guest article from Paleo Girl author Leslie Klenke.

Do you know that sensation in the pit of your stomach when you feel like something is meant to be? I’m not going to lie. I had that feeling the first time I met Mark Sisson two years ago at PrimalCon Oxnard. After just a brief conversation with him and a quick fangirl photo op, I knew my life’s trajectory was about to change—and boy did it ever.

If you’ve been active on Mark’s Daily Apple over the past year, you may have witnessed some of that change firsthand. You might have read my success story, heard about the release of Paleo Girl, tried one of my recipes, or listened to my feature on the Primal Blueprint Podcast. I also created Paleo Girl Magazine, a free bi-monthly eZine produced from community created content (you can sign up to receive your free subscription here.)

It’s all been loads of fun, but, more importantly, it’s been rewarding beyond words.

So today, I’m excited to mark an important milestone: the one-year anniversary of Paleo Girl’s release. And to celebrate, I’ve curated a massive giveaway of all my favorite things bundled up in a prize package worth over $1,700 for one lucky winner! But first, a very quick recap of Paleo Girl’s journey.

Immediately following its release last June, I was caught in a whirlwind of a press. Paleo Girl was featured in a number of blogs and magazines. I was a guest on some of my favorite paleo podcasts, and I was even on the KCRA Sacramento morning news teaching viewers how to make a few of my favorite meals and also some grok-tastic exercise pointers!

But my favorite piece of press was definitely one of the smallest: a feature in my hometown newspaper back in Ohio, The Vandalia Drummer. Receiving a picture of my mom holding that newspaper (after buying as many copies of it that she could find) will forever be a memory I treasure. (I love you, Mom!)

All in all, Paleo Girl has grown beyond my wildest ambitions. It’s made a space for more Paleo/Primal lovers to share, connect, and support one another in their journeys to better health. It’s also reinforced how important our ancestral health lifestyle can be to those seeking answers to questions that don’t have solutions in conventional wisdom.

So as a thank you to everyone who has connected with Paleo Girl and made it such a success, I’ve reached out to all of the incredible friends I’ve made in this amazing community and pulled together a HUGE giveaway! The list below (totaling $1,700 in retail goods and services) includes all of my favorite paleo goodies and is going home to one very lucky winner (with three other runner-up winners going home with some awesome swag, too!)

So if you want a chance to win the Paleo Girl One-Year Anniversary Giveaway, just follow the simple steps below!

The grand prize winner will receive the Paleo Girl One-Year Anniversary package ($1,700 retail value) and three runner-up winners will receive an autographed copy of Paleo Girl and a jar of Primal Kitchen Mayo. The contest will run June 11-18 and ends at midnight PST. All winners will be announced June 19.

That all said, I’d like to give a heartfelt thanks to each and every one of the sponsors for donating an item to this giveaway and celebrating the one-year anniversary of Paleo Girl in style! We’re an awesome community working for the same things, and getting together to celebrate is what makes living this lifestyle such a blast. 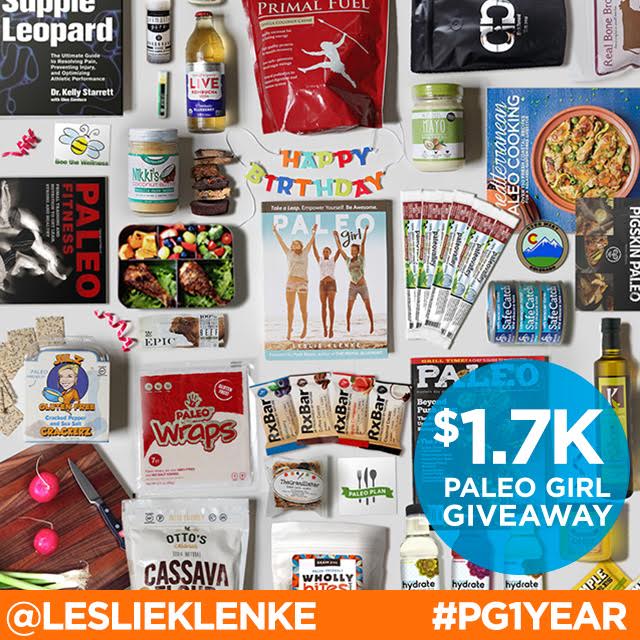 P.S. For those of you that don’t want to enter the contest, Paleo Girl is on sale this week only for $14.95—that’s 25% off retail price—and I’ll sign each and every copy that goes out! In addition to the discount, you will also receive the One-Year Anniversary issue of Paleo Girl Magazine with your order.