Our Primal Fear of Dying 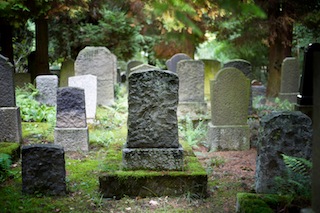 Many, if not most of us, have experienced at least one moment when we truly thought we were going to die. Maybe it was a plane ride from hell. Or a seemingly final diagnosis. A grim combat situation – or many.? A frightening near miss on the highway. A serious assault. Even a childbirth gone suddenly and inexplicably awry. Whatever the event, the experience can set off everything from tearful surrender to abject terror. It begs the question: is there anything quite so Primal as the fear of death?

I occasionally get mail about the fear of death. I believe we all think about it – probably much more than we let on, and it doesn?t surprise me at all when people write about it. When you open the door to discussion of innate instinct, I think it?s a logical thought that comes up.

From an evolutionary perspective, of course, we?re wired for survival. It?s the name of the evolutionary game itself – surviving and making sure our kin do as well in order to procreate and protect the genetic line. We?re built to fear death because how else were we to live? We fear ostracization because in primordial times, we weren?t likely to survive on our own. We fear conflict because in some deep, primeval chamber we associate it with death or disorder that can put the entire group at risk. Our ancestral memory can likewise flinch at the suggestion of want, neglect, or even change. Tens of thousands of years ago there wasn?t much room for error.

Likewise, the visibility of death was much greater in the primeval world. Risk was rampant, and Grok in all likelihood saw many of his clan succumb to everything from animal attacks to accidental injury to childbirth to interclan skirmishes. Animals died around them every day – the work of other animals, the ravages of age and starvation, and the intent of human hunting. The nature of primal existence didn?t leave much to the imagination.

To our Primal ancestors? perception, the barrier between life and death was much thinner than it is to us – at least those of us in the safer, more subdued communities of the so-called ?first world.? We can go through much of life untouched by death, apprehending it as an abstract as much as inevitable concept for decades until those we love the most leave us or circumstances force us to face our own mortality. The lack of exposure to death can oddly make us fear it all the more, I think.

Yet, the fear is more than reaction of momentary animal instinct or the effect of modern cultural distortion. We walk this world as intellectual beings able and even drawn to ruminate on the nature of our own existence – and the end of that existence.

Together with a sensitively tuned emotional spectrum, these aptitudes define both the gift and the burden of consciousness. We have the capacity to grieve and to anticipate grief – the ability to fear and to anticipate fear. In that anticipation we can imagine – and dread – the prospect of our ability to participate in life being fully cut off, our consciousness itself being entirely erased in this world. All we are is suddenly gone in an instant. While intellectually we know we?re transient figures on the planet, our minds can?t quite move entirely beyond the solipsistic concept that the world exists in relation to us. Like a child who is baffled hearing about a past that existed before her birth, we struggle to apprehend a future that will extend beyond our own. It can be a fearful experience to try and reconcile the intellectual anticipation of death with the emotionality of our individual point of reference.

Tied to that individual frame of reference, we may wonder how others in our lives will ever get on without us. Given that we view the world in relation to ourselves, we naturally see ourselves as indispensable to the life and lives around us, and our personal attitudes can exacerbate this perception of dependence/interdependence. As genuine as primary, loving attachments are and as wrenching as grief can be, perhaps it?s also too painful to imagine the adaptability of others to a life without us. Their lives won?t be the same certainly, but they will still take place and create new grooves of relationship and experience. Ultimately, we can be integral, but we are not essential to other people, let alone the planet.

What else feeds our fear of death, I believe, is a life not fully lived. In our modern sequential rationality, we can diminish the thinking of the traditional peoples who believed in the coexistence of past-present-future. We can belittle the street corner slogans of ?the end is near,? but I think we live a pretty grand mistake to live a life of always planning (and pining) for the future – delaying for coming years, getting through today in hopes of more freedom, more time, more fulfillment tomorrow. In living this way, modern messages tell us we?re being sensible. Natural law tells us we?re naive.

We never know, in all honesty, when the bell will toll for any one of us. We can fear that, or we can use it to put life in proper proportion – and to put ourselves wholly in the present, which is all we have. Sure the Buddhists say it, but traditional people practiced it long before they did.

From a Primal perspective, I think much of our fear ironically comes from not accepting the inherent insecurity of our existence. Society tells us the lie that we can create security, that it should in fact be our life?s work.

We buy into this mindset but secretly try to also comprehend that ?one day? when all will be taken away from us – even our very consciousness itself. Something in the limited human mind might think we can hide from it, outsmart it, out-save it, out-eat or out-exercise it. I see how our health efforts as well as other “sensible” choices can obscure a desperate denial of mortality. We think if we just do certain things we?ll be kept safe for a little while longer. We?ll stave off the inevitable if we just do everything ?right? to keep ourselves perfectly well and secure.

Yet, I don?t choose to live the way I do in order to be perfect or safe. I occasionally make compromises for things I really want to eat. I do ?unsafe? (not the same as foolhardy) things all the time. Exiting a helicopter to snowboard a more amazing mountain, I?ll acknowledge, isn?t playing it safe. While I trust my own skill and limits, I also know that to a certain extent I?m taking my life in my hands when I do that. Yet, I have always been drawn to risk. It?s in my fiber. I think it?s part of all of us and what has moved humanity forward in its evolution. (I recognize at the same time that other people?s version of desirable, satisfying risk looks much different than mine.)

A full life is one in which I feel I?m living from my whole human and individual nature. That includes risk of many kinds. And I desire to live (my version of) a full life more than I desire to be completely safe. Security isn?t my aim. Actualization is. My goal isn?t to live to be 100. It?s to compress morbidity and enjoy the biggest life possible in the number of years I?m alive on this planet. I let go of the ultimate outcome in the interest of living well today. I can choose to not do stupid things, but I?m ultimately not in control. I let go of fear in order to function.

There?s a profound and maybe beautiful irony here. Just as our fundamental instinct for survival wants to nail down surety and safety, Life with a capital L obliges us to check our need for absolute security at the door. The truth is, we always exist on the brink. It?s the nature of life itself – a confoundingly complex puzzle of infinite moving parts – ever shifting between creation and destruction. We have the capacity to observe this rhythm, but we?re also fully subject to it. As they say, none of us are going to get out of this game alive.

When we accept this truth, we can let it work within us. We can learn to configure our lives within the fact that we?re finite, that every single day is uncertain. We can live a different life – a more courageous and expansive life in acceptance of that hard reality. Fear of death, just like fear of almost anything, can keep us small. We shirk risk and its rewards for the promise of time that may never come.

While I?m not a believer in the afterlife, that doesn?t mean I don?t feel the significance or weight of the end of life. I tend to lean toward the concept of detachment. The ultimate fear we conquer is the fear of death. To accept our own finiteness is perhaps our final work in this life. The more we cling to ourselves, the more painful the prospect of dying is. The more we identify with a larger context than ourselves, the less suffering, despair or fear we face. We may not be immune to dark thoughts, but we put them in a bigger container.

I think over time we grow into our mortality as we do our maturity. That said, I?ve seen 70- year-olds who grasped desperately to the bitter and fearful end. Likewise, I?ve seen 7-year-olds dying of cancer accept their death with a knowing grace that both stuns and humbles. When we can emotionally as well as intellectually place ourselves within a larger storyline and accept life as the grand primal epic that it is, we find a right place within life – and perhaps make peace with death as a meaningful dimension of it.

Thanks for reading today, everyone. Please share your thoughts and revelations on this theme. Have a good end to your week.