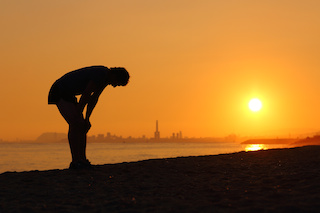 For today’s edition of Dear Mark, I’m answering four questions from readers. First up, are there any specific nutrient deficiencies that can contribute to fatigue? Which minerals and vitamins should you shore up when experiencing malaise? Next, what’s the deal with anxiety? Does it serve an evolutionary purpose, or is it just a pathological condition? Third, is there a place for conjugated linoleic acid (CLA) supplementation in a healthy diet and lifestyle? I dig into the studies to help you decide. And finally, what plant-derived oils beside just avocado oil are good to use when staying Primal?

First of all I’d like to thank you for your, I’d say, independent public service beneficial to all of us searching for a way to improve our lives. I’ve been Primal for 1.5 years, however, I’ve got a question about a possible connection between chronic sleep deprivation and nutrition.

The story goes like this. I was experiencing a stressful life period four and half years ago which resulted in chronic sleep deprivation and possibly some sort of depression. As a nice bonus, I was experiencing anxiety attacks in some situations (especially before and while eating). Sleep improved (though not 100%), anxiety went mostly away along with the improved sleep and after skipping breakfast (resulting in more steady energy levels). However, I can still feel the effects of the sleep deprivation a lot, especially after a bad night sleep. E.g., I can feel effects of even 15 or 30 minutes shorter night sleep the whole following day. Though I know that sleep deprivation is impossible to out-eat, I wonder if there is any link between chronic sleep deprivation (or its consequences) and some specific nutritional deficiency preventing getting rid of the resulting exhaustion.

Well, there are certainly nutrient deficiencies that can cause general malaise, fatigue, or lack of energy. If you’re starting from a deficit in any of these nutrients, it’s quite possible and probable that sleep deprivation will hit you harder than it would had you been replete in them. What nutrients am I talking about and how can you make sure you’re eating enough?

Iron: Iron forms the backbone of the red blood cells that deliver oxygen to the various cells, organs, tissues (including muscle), and systems throughout your body. Since your body needs a steady supply of oxygen to function, iron deficiency can result in lower energy production and crippling fatigue. A hallmark sign of iron deficiency anemia is constant fatigue. Best sources include liver (chicken liver being higher in iron than most others), red meat, and meat in general.

Selenium: Selenium is required to convert “inactive” thyroid hormone to the “active” form — the form that “does stuff.” Best sources include wild salmon, Brazil nuts, shellfish, and kidneys.

Magnesium: We need ample magnesium to produce ATP, the body’s energy currency. Anytime we burn fat, glucose, or ketones for energy, the “energy” being produced comes in the form of ATP. Inadequate magnesium leads to lower levels of intracellular ATP, meaning cells can’t perform at their optimal in the face of lower magnesium. Best sources include almonds, spinach, chard, and good mineral water (Gerolsteiner is one of my favorites, but just check the labels for mg/L; European markets often have good options).

Vitamin B12: Pretty much all the B vitamins figure into energy production and deficiencies can cause fatigue, but B12 is the most prominent, common cause of fatigue. Best sources include organ meats and red meat in general.

Every nutrient is important, and it’s not inconceivable that some obscure mineral or vitamin deficiency could contribute to fatigue, but those are the major ones you should eliminate from contention before looking deeper.

I just got back from a trip to the grocery store, and it got me wondering: Is there some inherent stress associated with being around a lot of strangers? I know our ancestors came into contact with people they did not know, but it couldn’t have been to the extent that we experience today, both in terms of frequency and quantity of strangers.
I know I am stressed out by being around lots of people I don’t know, but I don’t know if that’s because of our evolutionary past or my own personal temperament (which I know does play a role in my stress). Has anyone ever looked at this?

Anxiety isn’t an aberration, an inherent pathology. In a “wild” environment, anxiety promotes safety. Anxious people (or mice, or rabbits, or any other animal) are cautious and live longer than carefree, careless people when things want to eat you and other people want to take your stuff and possibly inflict grievous harm upon you.

Today? Anxiety remains, but it doesn’t serve the same purpose. The world is generally safe. Pockets of violence, crime, and danger certainly exist, but the average reader of this blog doesn’t have to fend for his or her life on a daily basis. That’s a good thing. Unfortunately, it also means that anxiety rears up at in opportune times: in the grocery store surrounded by strangers, at a party where you don’t know anyone, during a job interview, when trying to muster up the gumption to go talk to the pretty girl.

Some geneticists term this the “warriors versus worriers” dichotomy. Depending on which gene allele a person has, they either respond favorably (warrior) or unfavorably (worrier) to stress. Worriers tend toward more anxiety, but they’re better at tasks requiring memory and planning. Warriors do better in acutely stressful situations, but they may be more likely to suffer from schizophrenia.

Your personal temperament may very well be inextricably linked to your evolutionary past (and your genetics). Take solace in the fact that you’re not “broken.” Your temperament was, and is, needed. You complement the more impulsive. We need both the brash and the thoughtful.

Confused, request your opinion on CLA. Have read several benefits of CLA supplementation, other sources say data inconclusive. Recently watched a Utube Video with Greg Glassman on nutrition and athletic performance and I think he said avoid it. I very much value your opinion on all subjects of health and fitness and would like your take on CLA.

There are two isomers of CLA: t10, c12 and c9, t11. The c9, t11 form of CLA is what we find most abundantly in grass-fed dairy and animal fat, formed as the result of grass fermentation in the rumens of cows, sheep, bison, and other edible ruminants. In fact, c9, t11 CLA  accounts for between 80-95% of the CLA in ruminant and dairy fat, with t10, c12 showing up in only trace amounts; supplemental CLA usually runs about 50/50 with the two isomers.

Because t10, c12 is better at burning body fat and preventing fat gain than c9, t11. In one in vitro study, t10, c12 inhibited lipogenesis, or (something analogous to) body fat creation, while c9, t11 did not. It also showed promise as a promoter of lean mass versus fat mass in humans. For what it’s worth, t10, c12 can also inhibit the growth of human colon cancer cells in vitro, while c9, t11 has no effect. Makes CLA supplements look pretty good, right?

No. Things change when you look beyond the effects on fat loss. Let’s take a look at a few examples.

When you examine parameters other than just body fat, CLA loses a head-to-head match with safflower oil. The diabetics who used safflower oil saw improved insulin sensitivity, higher HDL, and lower markers of inflammation compared to the diabetics who used CLA supplements. Like most of its ilk, the CLA supplement was 50% trans-10, cis-12 and 50% cis-9, trans-11, far different from the CLA you’d get from grass-fed butter or pastured lamb steaks. And two other studies using t10, c12 and c9, t11 at a 50:50 ratio also had similarly negative results, with one showing worsened metabolic syndrome and another showing increased c-reactive protein and insulin resistance.

Are you noticing a pattern? Again and again, supplemental CLA seems protective or beneficial when you only consider fat loss or gain, but when you consider more than just weight loss negative effects appear. You might burn some body fat, but you’ll also become insulin resistant. You might stave off body fat gain, but your liver gets fatter. I’m a big supporter of intelligent supplementation, but in my opinion, CLA supplementation doesn’t qualify.

The right CLA supplement employing the right isomers in grass-fed ruminant-fat proportions could be helpful, but I haven’t seen any out there that fit the description. I think you’d be better served simply eating grass-fed, full-fat dairy (butter, cheese) and meat.

My question is what vegetable oils are not derived from seeds?

I read on Avocado Oil’s Wikipedia page that it is, “… one of few edible oils not derived from seeds…”. I was wondering about other such oils given that one of the objectives of the Primal way seems to be either reducing and eliminating seeds or treating seeds through process of soaking and fermentation.

Love your articles and links.

If by vegetable oils, you mean “plant-derived oil,” there are a few good ones that qualify as Primal-approved.

Olive oil: Everyone loves good olive oil. It’s heat-stable (contrary to popular belief), it’s high in healthy monounsaturated fat (which, again, everyone agrees is good), and it tastes really, really good if you get a good oil. No reason not to have a bottle of extra virgin olive oil on hand. Just make sure it’s really olive oil.

Red palm oil: The best natural source of broad-spectrum tocotrienols, red palm oil is an extremely worthy fat to have. Plus, since most red palm oil comes from West Africa, it doesn’t suffer from the sustainability and orangutan-killing problems of its refined version.

Coconut oil: You know about coconut oil by now. It’s a Primal darling.

Tigernut oil: Tigernuts are kind of new on the scene. Well, they’re actually really, really old, with some evidence suggesting that they formed a major part of the early African hominid diet. But as far as the ancestral health community goes, tigernuts are new. They’re neither nuts nor fruits. They are fatty tubers rich in resistant starch and fiber and flavor. And the oil is fairly similar in composition to olive oil.

Any of the nut oils also qualify, though those are closer to seed oils in fatty acid composition than the oils listed above.

That’s it for today, everyone. Thanks for reading and be sure to help out down below in the comment seciton with any additional input you might have.