Not Just for Bodybuilders: The Many Wheys Whey Protein Can Improve Your Health 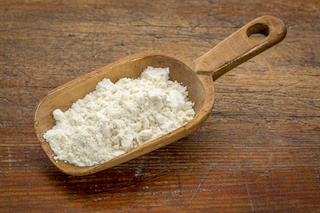 (Apologies for the terrible title. I just couldn’t help myself.)

When you think of whey protein, what kind of consumer comes to mind?

The six-meal-and-three-snack-a-day bro who keeps a whey shake on his bedside table to maintain those 2 AM gains.

The up-at-dawn-to-beat-rush-hour woman who drinks a shake in the car in lieu of a pastry.

As most people see it, whey protein’s just for people who want more protein in their diets, people who don’t have the time to cook, or people who hate to cook and also need more protein. It’s for weight lifters and athletes. It’s a “poor replacement” for real food. It’s a compromise when life happens. If you can cook and eat real food regularly, the popular story goes, you don’t need whey. Just eat real food – right?

That’s all true to an extent. Real food is the foundation for a healthy diet. But whey protein is much more than a muscle-builder and meal replacer. I’d argue that it deserves a spot on the “supplemental foods” list alongside egg yolks, liver, fatty fish, and all the other foods that are powerful and vital in small doses. I’d also argue that everyone can benefit from whey.

Now, anytime I mention dairy, the issue of tolerance arises. “Sure, Sisson, grass-fed full-fat yogurt sounds awesome. It’s totally healthy and full of nutrients and probiotics, but I break out simply by reading the word ‘casein.’ Can’t do it.”  Tolerance has to come up. Dairy just doesn’t work for many people, whether it’s the lactose or the proteins. Luckily, most people can tolerate whey without issue. You’re far more likely to be allergic, sensitive, or intolerant to lactose or casein than to whey. And whey may even be downright anti-allergenic, as whey-based formulas have shown efficacy in the prevention of allergic diseases like asthma and eczema in susceptible children and infants.

You may be among the unfortunate few who cannot tolerate whey, and that’s fine. But an inability to handle Greek yogurt or milk doesn’t preclude you from enjoying whey, so don’t count yourself out until you’ve actually experimented with the stuff. As a new review explains, whey protein offers important and unique benefits to anyone who’s lucky enough to have access.

Whey isn’t just protein. It’s not only a thing you eat to obtain amino acids for increased muscle protein synthesis. It’s also comprised of a host of bioactive components, each with unique effects. You’ve got:

Those are just a few of the components found in that undigested whey powder sitting in your pantry. Once the whey hits your GI tract, many different bioactive peptides with their own unique effects are formed. In a recent review (PDF), a team of Polish researchers explored the effects of at least nine of these whey-derived peptides. Some improve blood lipids, lower blood pressure, or act as opioid receptor agonists (if you’ve ever seen a milk-drunk baby bliss out after nursing, his opioid receptors are likely being severely agonized by bioactive peptides). Others induce satiety and improve metabolic health biomarkers.

How does all this bioactivity play out? What happens when actual whey is consumed? Well, evidence suggests whey can help in a number of health conditions, like:

Obesity – Whey tends to reduce fasting insulin levels in the obese and overweight (but not healthy prepubertal boys, who could use the growth promotion), increase satiety, reduce food intake, and improve resting energy expenditure. If you’re trying to lose weight or prevent obesity, increasing the amount of energy you burn at rest and decreasing the amount you consume – by manipulation of satiety and fat-burning hormones – are indispensable effects.

Diabetes – Eaten before a meal, whey reduces the glucose spike from the subsequent meal in non-diabetics and type 2 diabetics alike. It achieves this by “spiking” insulin, but transiently; the insulin area under the curve improves even as the immediate insulin response increases. Plus, as seen above, fasting insulin tends to lower in people consuming whey protein.

Cancer – Both the lactoferrin found in whey and the glutathione synthesis whey promotes may have anti-cancer effects. Lactoferrin shows potential to prevent cancer that has yet to occur and induce cell death in existing cancer cells. In a recent human study, oral lactoferrin suppressed the formation of colonic polyps. And in animal cancer studies and human cancer case studies, whey protein has been shown to increase glutathione (“foremost among the cellular protective mechanisms”) and have anti-tumor effects.

HIV – HIV is characterized by a drastic reduction in glutathione levels. And even if whey doesn’t always increase body weight in HIV patients, it does improve CD4 (a type of white blood cell) count, lower the number of co-infections, and persistently increase glutathione status.

Sarcopenia – Muscle wasting, whether cancer-related or a product of age and inactivity, is a huge threat to one’s health and happiness. Studies show that whey protein is the most effective protein supplement for countering sarcopenia in countering sarcopenia, especially compared to soy. A buddy of mine can attest to this; a couple months back, his grandmother hadn’t eaten for a few days, was suffering from diarrhea, mental confusion, and basically appeared to be on her deathbed. He started making her whey protein-based milk shakes and the recovery was rapid. She grew alert, active, and regained her appetite and control of her bowels. She’s not out of the woods, but at least her remaining days will be much better than the direction they were heading.

Gastrointestinal disorders – It may surprise you, but a component of dairy can actually improve gut health, even in patients with gastrointestinal disorders. In human Crohn’s disease patients, a whey protein supplement reduces leaky gut. In rodent models of inflammatory bowel disease, whey protein reduce gut inflammation and restore mucin (the stuff used to build up the gut barrier) synthesis.

By now, it’s quite clear: even if you’ve never sniffed a barbell, even if you personally cook absolutely everything that enters your mouth, and even if you have all the time in the world, whey protein can probably still benefit you.

Let’s hear from you guys. Do you take whey? If so, what kind and why? How have you benefited?