No Freshman 15 for This Guy!

I remember my senior year of high school before deciding to go Primal. I went to a small high school just outside of Milwaukee, Wisconsin, and was a two time state qualifier in track in field for the 4×200 meter relay. I ran sprints in track in the spring, and ran cross country in fall to stay in shape and work on running form. As you can guess with all this constant working out (especially in cross where I was running an average of 3-5 miles per practice, averaging close to 30 miles per week), I was a carb hound! On average, I was probably consuming about 500 grams of carbs and consuming close to 4000 calories daily, consisting of 95% junk foods like pastas, cookies, ice cream, sandwiches, and all the other artificial foods you can think of. 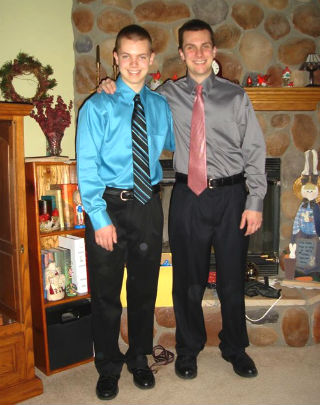 Prior to going Primal, I had an extensive history of muscle injuries and joint issues. I tore or strained every leg muscle you can think of, from tearing my hip flexor, to having strained my quad so severely my knee would swell to the point where I could barely straighten my leg. My joints were constantly stressed and ached occasionally. I will never forget when I had my physical before cross country season my senior year, and my doctor told me I had knee joints equivalent to that of a 40 year old marathoner. You can imagine I was pretty disturbed as an 18 year old being told this. Outside of muscles and joints, I was also a victim of some pretty nasty acne, particularly around my chin and mouth area. It was not fun walking around high school and just thinking what people thought of you when they noticed all the red, white tipped bumps on your face! Emotionally I was also very distraught. I used to have mood swings regularly, and such a short temper, I used to go off on people even when they were trying to help me. I was pretty messed up to say the least. It was not until after cross country season of my senior year in high school my brother Tony (on the right, in the photo) introduced me to MDA, and Wheat Belly by Dr. William Davis.

My brother Tony had started living Primal about a year before me, and had lost a significant amount of weight (close to 50 lbs), and reversed his pre-diabetic symptoms. I remember my cross country coach saying how much you need carbs, and when Tony first started his diet, I criticized him at first saying he was nuts! Well I was the nuts one later when I found out after reading The Primal Blueprint, MDA articles, and Dr. Davis’s work about all the information nutritionists, doctors, and health professionals fail to mention when they meet with you, and how entirely backwards they have their recommendations. Needless to say my eyes were opened, and I was ready to make a change for the better.

It was a difficult transition for me to go Primal in some sense. My parent’s pantry and fridge was, and still consists of mostly wheat and sugar based foods as they refuse to change over. I’m still working on changing that. So, as you can imagine, I was like what am I supposed to eat?! Well at the time, I was working as a produce clerk at the local grocery store. I was around fruits and vegetables all day, so I decided to start seeing what tasted good to me. Prior to this, I had never tried spinach, romaine lettuces, kale, and all these delicious nutrient rich substances that were always around me. I started making myself salads at work, eating berries, apples, oranges, and bananas when I had the daily sugar cravings, instead of a bag of gummi bears.

The first time I tried a salad at work, I’m not going to lie, I wanted to put some ranch on the lettuce and some ketchup on the chicken to sweeten it up, but I stuck it out. It felt like I was quitting smoking, as I had crazy cravings for the remainder of the week for sugar.

Eventually though, about five days after starting this new eating style, I found myself getting up one morning with a big surprise. My knees would normally ache when I would get out of bed in the morning, and this was no longer the case. I thought to myself, no way. No knee pain! This was the first change I noticed, and I still remember that moment every time I wake up now. As my new eating style continued, my acne began to go away quickly, my teeth started becoming whiter and cleaner, and my mood swings had majorly improved to the point where I no longer have them. I fortunately have never had a weight problem. I have been 150 pounds since I was 16. Soon after though, I began to notice more toning of my muscles, now that my body could properly metabolize protein more efficiently. I started being able to work out, and run freely without worrying about my leg muscles tearing apart on me, and I got back to enjoying fast paced sports once again. Things were definitely changing for the better, and I was daily (sometimes hourly) going on MDA to keep learning about all the health questions popping into my head.

I was always around a 3.7 gpa in school, so I was above average, but by no means a genius. Once going Primal, I started noticing changes in how much clearer I was able to think. I used to daily come to class with a foggy conscious, and could barely stay awake during instruction. This was no longer the case as I was much more alert, able to focus much longer, and engage in subject material. 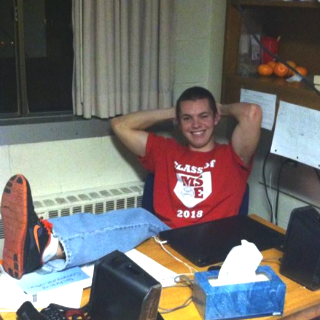 A year later now, I am graduated from high school and a freshman in college at a small engineering school in Milwaukee, WI. There are so many opportunities to gorge in endless pizza slices, greasy hamburgers, and all that other college food most of you are aware of. I avoid these foods like a hazard, and everyone looks at me all the time because of all the vegetables I snag from the salad bar. I typically don’t eat a breakfast as I honestly do not have hunger in the morning. Most of the time, I just grab a bottle of water on my way to class until lunch. My lunch often consists of a full plate of greens with usually a couple pieces of baked chicken, pork, beef and other entrée’s. Dinner is usually the same kind of food as lunch. I keep fruit in my dorm room, along with some nuts, almond butter, and some cheese to snack on in case I get sugar cravings. I never imagined myself eating the way I do as I never tried any type of eating beside the carbohydrate binges suggested by the National Institute of Health’s food pyramid. You know, the one with the suggested 11-12 servings of grains per day. Never going back to CW. Going Primal is, and from here on out will be the way I live my life.

I hope from reading my experience parents, especially parents with kids in college, encourage Primal style living at home with your kids. My grades, my physical/mental state, and my life has never been better and more enjoyable. I am in great shape consistently working out two to three times a week for about an hour each time. No freshman 15 to worry about, very thankful for that. Family life is much more enjoyable now I am not the kid who would come home in a different mood each day. This lifestyle did not just change the way I eat, it changed my life!

A special thanks once again to my brother Tony, and his friend Dave who got Tony started going Primal. Without them, I would not be where I currently sit.