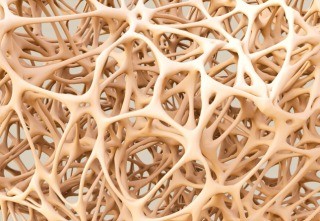 At the heart of every building is its framework. That latticework of timber, concrete or steel is what holds the entire structure up. Without it, there’d be no building at all. I think of that phrase some people use when they look at a house and declare, “It’s got good bones.”

Considering how essential bones are to our existence, it’s surprising how most people take them for granted. A lifetime of neglect can suddenly reveal to us just how sensitive and integral this living framework is. Yet, there’s so much more to this truth than we commonly assume.

Sure, the skeletal system provides the stable foundation upon which our muscles, organs and fascia are constructed. But that’s just the half of it. Bones also secrete hormones, interact directly with the brain (ever heard of the bone-brain axis?) as well as other organs and fat cells, and even play a key role in immunity. I’ve covered many of the basics of bone health before, and I’d definitely recommend checking those out to augment these suggestions. For today, however, let’s look at some of these lesser known and appreciated functions—as well as some additional tips for supporting bone health throughout the life cycle.

While their primary purpose is structural support, in many ways, bones actually behave similarly to glands.

An interesting article posted a few months back in Nature demonstrated just how in tune our bones are with the rest of the body. Researchers showed that, contrary to the view of bones as inert organs, they’re actually in continual communication with the brain, kidneys, pancreas, fat cells, and more via a group of hormonal messengers, including osteocalcin, sclerostin, fibroblast growth factor 23 and lipocalin 2.

Experiments showed that after mice eat their bones release liopcalin 2, which then travels to the brain. Here it sticks to appetite-regulating cells, signaling to the brain to stop chowing down. This means that our bones act as appetite-mediators, sending messengers that cross the blood-brain barrier to let the brain know that sufficient nutrients have been absorbed to keep the bone-building process going. Previous thought assumed fat cells were largely in charge of this task, but it appears bones actually produce 10 times more of this appetite-curbing hormone.

Osteocalcin, a hormone produced by bone-building osteoblasts, further helps to regulate blood sugar by telling the insulin-secreting cells in the pancreas to get cracking. Osteocalcin also communicates directly with fat cells to release a hormone that improves insulin sensitivity.

Beyond these critical functions, the osteocalcin produced by bones plays a key role in testosterone production and male fertility, helps regulate mood and memory, and even interacts with the brains of developing fetuses. An interesting side note…osteocalcin may also help improve endurance, with studies in mice showing that older mice were able to run almost twice as far after being injected with osteocalcin.

Capping things off nicely, continuing studies in mice indicate that the osteoblast-regulating hormone sclerostin plays a role in energy metabolism. When secreted from bones, sclerostin has been shown to increase energy expenditure by helping the body switch to ketogenesis.

What Probiotics Do for Bone Density

Studies in mice show that probiotic-treated mice retained their bone density even after ovary removal, compared to the control group that lost a whopping half of their bone density. Researchers just used your stock-standard Lactobacillus strains, commonly found in cultured dairy products such as yogurt and kefir.

A recent Chinese study confirmed that these findings may also apply to humans, with the bone mineral density of diabetic patients being higher the more Lactobacillus and Bifidobacterium that showed up in fecal samples. Clearly, eating and supplementing for a healthy biome is about far more than just the gut.

A Word about Exercise and Inflammation

Over the course of nine months, researchers monitored changes in the bone health and structure of female rowers training for the 2016 Olympic Games. The rowers were chosen due to their vigorous training regime (average of 18 hours per week). During the nine months, proponents noticed that protein precursors to bone loss increased significantly, along with the bone formation-inhibiting hormone sclerostin. This was exacerbated by increased inflammation in the bodies of the over-worked rowers, which contributed to higher counts of sclerostin.

Overtraining aside, exercise remains one of the leading ways to ensure optimum bone health into later decades.

Finally, there’s the role that exercise can play in reversing unfavorable genetics. According to research, 50-80% of bone density is predicated on genetics, with conditions such as brittle bone disease being passed on from mother to baby in the womb. Studies on mice indicate that higher myostatin is directly proportional to higher risk of bone disease. Exercise, in particular weightlifting or short high-intensity workouts, decrease levels of myostatin in the body and increase bone mass.

On the subject of myostatin, increasing healthy fat consumption, particularly fats with MCTs, along with cutting out inflammatory foods like sugar and grains, also contributes to lowered myostatin levels. In addition, the catechins found in green tea have been shown to lower myostatin production and support healthy bone metabolism.

As for the dairy with bone health? One study examined the association of milk, yogurt, cheese, cream and vitamin D with bone mineral density in adults around the age of 75. Researchers found that milk, yogurt and cheese were protective against both hip and spinal bone loss…but only when participants also supplemented with vitamin D. Those who consumed the same amount and type of dairy, but didn’t get their daily dose of vitamin D, showed no positive correlation at all.

Also, one salient note: the researchers at the end of their study noted that vitamin D supplements were also associated with significantly reduced risk of bone complications in both men and women. But that’s not a surprise to anyone, is it?

Thanks for reading today, and offer up any questions or feedback below. Take care.