My Journey to Primal 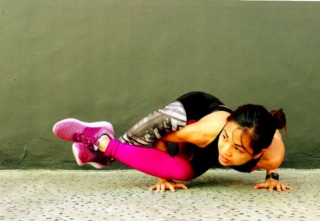 Growing up I could never have described myself as a healthy person. Thin, yes. Athletic, yes. But as a student I was always missing classes because I would fall ill, and even when I was older I would constantly have the sniffles from allergies and could easily use up a pack of tissues a day. I had a really twisted notion of fitness: as long as I had the energy and endurance for my dancing and my workouts, and as long as I could fit into my old college jeans, then it meant I was on track with my wellness goals.

The event that changed all that was a disturbing result that came back from my Executive Checkup in 2012: a tiny, suspicious growth that eventually was ruled out as benign and quickly removed. It scared the hell out of me. It was then that I swore to avoid consuming or using anything unnatural or toxic to my body, and I set off on a mission to learn about what would help me to achieve true health and never have to go through a scare like that again.

My own Primal Journey was a series of hits and misses over 7 years, which I spent doing self-study and experimenting with my diet and activity to find what would work for me. It was following the Primal Blueprint that finally brought me to a point where I am comfortable and confident with the state of my health. This is why I was driven to be a Primal Health Coach: because I want to help others to cut through the clutter by sharing my own knowledge and experience, and provide guidance based on established research and the latest studies by leading-edge health experts who are part of the ancestral health community.

Like many people, 30 was the age when I started to feel that my metabolism was slowing down. No longer could I eat, drink and party as much as I wanted and still wake up with a flat stomach and unlimited energy. I took to more frequent workouts and calorie restriction so I could maintain my weight.

After finishing my very first full marathon in 2010, my 4-year running career quickly slowed down and sputtered to a stop. I got bored. So I started trying out other things like yoga, Barre and whatever group class was happening at the gym. In 2012 I discovered Bodyrock, a site that provided free, fun and engaging High Intensity Interval Training (HiiT) videos. After just a few weeks of Bodyrocking I noticed how my arms had less jiggle, and an officemate randomly asked me if I was training for something. That, plus the fact that it was so easy to fit the short 12-minute workouts into my early morning routine before work, got me hooked.

After 3 or 4 months of logging my workout scores, seeing my progress (more reps in the same amount of time) and feeling stronger, it was disappointing that my waistline was not budging. Plus, to my dismay, I was gaining weight, I felt bloated almost everyday, and I would get incredibly sleepy after lunch. I couldn’t understand why. I wasn’t on a diet, but I didn’t think it was a problem because I never ate a lot anyway, stayed away from fatty food, never drank sodas, ate burgers only occasionally, and all that. My average calorie intake must have been less than 1400 a day. Someone once joked about my appetite and said that if I ever got into an eating contest with a pigeon, the pigeon would win. And yet stubborn fat remained around my middle, and I hated it.

One of the guest coaches on Bodyrock said that if Bodyrocking wasn’t working for you, it had to be one of two things: either you weren’t consistently working out, or you weren’t eating right. I was working out almost everyday, so I took a look at their diet tips and discovered Clean Eating, which involves avoiding processed food, trying to get more veggies into every meal and shifting from my usual white rice and bread to complex carbs.

I have to credit Clean Eating for my helping me build my kitchen skills. (Embarrassing as it is to admit, I had always relied on the help to do the cooking all these years, and my husband Dex knew his way around the kitchen much more than I did!) I started preparing more meals at home, and my family found themselves eating all kinds of grains they never knew existed: couscous, bulgur and quinoa. We were buying more fruit and greens and actually consuming them instead of throwing them out because they had gone bad after being ignored in the refrigerator.

I felt great about this change and it was so empowering to know exactly what ingredients were going into every meal. I would often find myself comparing our homemade meals with restaurant dishes and thinking hey, I could do a better job than this!

About four months into Clean Eating I felt healthier, and I wasn’t getting sick as much. Even when there were nasty bugs going around the office I was always left standing, so I knew I was doing something right. And yet the bloating remained, and so did the stubborn fat around my middle. One day I went to the gym and weighed myself, and was so upset to find that I was at my heaviest in the last 13 years! What was going on?

Enter the Paleo diet, based on the premise that human physiology has not changed much since the caveman days, and hence a diet similar to those of early humans is the optimal one. A friend of mine swore by Paleo, and she was looking great, so I found myself reading up a lot on the subject. I geeked out on Charles Poliquin, Mark’s Daily Apple, Robb Wolf and all kinds of health and nutrition sites, and finally gave it a try.

On the Paleo diet, I was eating a lot of meat, healthy fats and veggies. I suffered through a few days of carb withdrawal (which was awful), but the results were very encouraging. My bloating disappeared almost immediately after I cut down on carbs, and my tummy got flatter week after week.

I was so excited with the idea that I could eat as much as I wanted as long as it was on the Paleo- approved list, and so I started cooking up all kinds of Paleo treats: cupcakes, cookies, energy bars and whatnot. So what if they were sweet? They were made with wild honey and pure maple syrup!
And so the weight came back. More than ever before. And once again I was stumped: I was following the diet, so why wasn’t I getting the results I wanted?

I revisited Mark’s Daily Apple and decided to do a reset and listen more to my body and follow its signals. Instead of strictly adhering to a set of diet restrictions, I now focus on making good meal choices. Instead of tiring myself everyday with grueling strength and cardio workouts, I do strength/HiiT only 3 times a week, do active rest days (mostly with short yoga or pilates sessions) for the other 3, and a weekly sprint session but only when I feel like it. For the most part I just try to make sure I move around as much as I can throughout the day and don’t force myself to work out when my muscles are sore. Sleep and stress management round up the picture.

What is Primal health to me? More than following the guidelines of the Primal Blueprint, it’s about making smart, informed choices about food, movement, and lifestyle, and being mindful of your body, your energy levels and moods. So far so good, and so the journey continues….

23 thoughts on “My Journey to Primal”