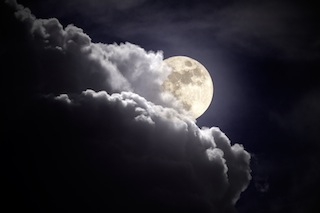 For today’s edition of Dear Mark, we’ve got three questions and three answers. First, the full moon sure is pretty and big and bright at night, but can it produce (or reflect, rather) enough light to disrupt our melatonin production? Should we be blocking out moonlight, too? Next, do exercise non-responders exist? If not, what else can explain the curious case of a lifelong heavy lifter who has nothing – physique-wise – to show for it? And finally, a recent article in Slate makes the claim that weight loss is basically impossible and not even all that good for you. Is the author right? Is the author wrong? See my thoughts on the matter down below.

Completely blacking out a room for sleep seems to be all the rage these days, but we seem to be forgetting a large source of natural light at night – the full moon. I know that’s different to street lights etc, but the full moon (especially when it’s a supermoon) throws off A LOT of light. So is it really necessary to block out all light in our rooms when Grok would have had to sleep with a significant amount of light himself?

Yep, those crazy kids and their blackout curtains, eh?

Pete, I’m with you. It doesn’t make sense. The moon is always up there. There’s no escaping it when you go camping, and I just can’t see a paleolithic hunter gatherer scurrying around trying to block it out with animal hides. I’ve never found the moon, even a full moon, to bother me at night like a light on bothers me.

Now, if you’re a golden or seagrass rabbitfish (I hope there are at least few of you out there, because that would confirm I’ve finally broken into the ocean communities), moonlight can inhibit melatonin production. But as of now, there are no human studies showing evidence of melatonin inhibition in response to moonlight.

Is it possible, though? I doubt it.

However, full moons still can disrupt sleep, but not because of the light. In 2013, a sleep lab study found that the lunar phase can affect human sleep. What changed during the full moon?

Amazingly, the subjects weren’t exposed to any more or less light. They didn’t do any moon gazing. They didn’t even see the moon, as the lab conditions were strictly controlled. The researchers aren’t really sure what was going on. Neither am I.

But it’s not the light from the moon disrupting melatonin. So don’t lose sleep over it. Pun intended.

Blackout curtains can make sense if you live in an urban environment or otherwise need to block out street or car lights.

And finally, while it’s doubtful moonlight disrupts sleep, I’ve yet to find any evidence that a lack of moonlight has any effect either. In other words, there’s nothing wrong with blackout curtains.

Thanks for all the information you share with us. I have lifted heavy things all my life (I am now 51) but look externally as if I do no exercise whatsoever. I also eat primally and have done so for 3 years now. My question is do you think there is a percentage of the population that does not respond to any exercise protocol? Thank you in advance for any comments.

Hey, Kevin. You’re on the right track. There are genetic non-responders to exercise. Most of the research in this area has focused on endurance exercise, but genetic non-responders to strength training also exist. In a 2007 study, researchers placed 66 people on a lower body strength training regimen consisting of squats, leg presses, and leg extensions. Every subject was matched for effort based on their 1 RM max, so everyone worked equally hard. They trained for four months, after which the degree of hypertrophy was assessed and the group divided into three subsections: those whose thigh muscle fibers grew 50%, those whose grew 25%, and those whose didn’t grow at all. 17 subjects were hyper responders, 32 were moderate responders, and 17 were total non-responders. Further analysis of the same data revealed intrinsic differences between the subjects, with the hyper responders starting with higher baseline numbers of satellite cells (the precursors to muscle cells) than both the moderate responders and especially the non-responders.

You might try doing a bit more endurance work, though. I know, I know, it’s sacrilege around here, but the fact is that some people just respond better — much better — to endurance training. Don’t overdo it, and keep up with the strength training, too. Strength training isn’t a pointless endeavor even if you’re a non-responder. While the non-responders from the study didn’t get any bigger, they did make significant strength gains — a minimum of 46% over their starting strength by the end of the training. That’s real progress, objective strength that can’t be ignored. So even if you’re not massive or “ripped,” you are stronger than most of the population who hasn’t been training, and it’s clear that you’re getting something out of the training since you’ve kept up with it so long. Don’t be disheartened or dissuaded. Keep it up.

I’ll briefly summarize the endurance lit in case anyone reading this falls into that category. Whereas about 85% of the population experiences big improvements in VO2max after sustained endurance training, about 15% do not. They can work hard, about as hard as the others, and follow the same protocol yet experience almost no improvement to their oxygen consumption rates. In some people, endurance training can even degrade their health. They actually experience worsened insulin sensitivity, lower HDL, and elevated blood pressure when they train.

Another thing to look into is getting your testosterone levels checked. Do a full panel with your doctor and go from there. It may be that your levels are a little low, which is sometimes just a part of aging. If so, a little T replacement therapy can be hugely beneficial to your strength levels, your physique, and your overall quality of life. I’d at least rule that out before worrying too much.

Have you seen this?

The Weight of the Evidence: It’s time to stop telling fat people to become thin.

I about threw my computer across the room when I read it, but I’m not sure where to begin breaking it down. If you have the time, I’d greatly appreciate reading your response.

Let’s look at one of the claims: losing weight doesn’t actually confer any health benefits.

Except for a few totally inconsequential health benefits, that is:

Or how about another claim the author makes: being obese isn’t really that bad for you.

The author stresses the many recent epidemiological studies have observed that higher BMIs seem to be more protective against mortality than lower BMIs. Particularly in the elderly, who are, let’s remember, the ones doing most of the dying, a low body weight is often associated with earlier dying from all causes. This would seem to suggest that being overweight or even obese is perfectly safe, if not downright protective. So, is dieting dangerous?

No. Here’s the thing: many diseases cause weight loss. When an obese person develops cancer, they’ll often lose enough weight (from the disease itself and the treatments) to reach a normal or even underweight BMI. If they die from the disease, that death counts as a “normal BMI death.” But the thing that killed them happened when they were obese. A recent study examined this exact issue, using “maximum BMI” to control for the disease-induced weight loss confounder. What they found was extremely interesting:

The percentage of mortality attributable to overweight and obesity among never-smoking adults ages 50-84 was 33% when assessed using maximum BMI. The comparable figure obtained using BMI at time of survey was substantially smaller at 5%.

So, when you include the obese and overweight people who got sick and then lost weight before they died, obesity and overweight is responsible for a third of deaths in non-smoking elderly. When you don’t, obesity and overweight is only responsible for 5% of deaths. The guy who loses a hundred pounds going Primal is very different than the guy who loses a hundred pounds going through chemotherapy, but most studies examining weight loss and mortality don’t make this distinction. That makes all of them and their conclusions suspect, if not downright invalid.

And the biggest whopper of all: weight loss is impossible.

That’s the biggest load of self-deceiving malarkey in the entire article. The author’s proof of weight loss’ futility?

An anecdote of a woman who lost 55 pounds 10 years ago and only keeps it off with an 1800 calorie diet and regular exercise. Um, okay.

Still, I can’t really get too upset at the author. Weight loss isn’t easy and keeping it off is even tougher. There’s no getting around that. People are frustrated because what the “obesity industrial complex” is prescribing doesn’t really work. Those who do lose weight may find it comes back twice as easily for reasons which I’ve covered quite recently. It’s hard. Everyone agrees with that.

But it’s also worth the effort. Anyone who’s gone from wheezing after a flight of stairs to bounding effortlessly up a ten story stairwell while carrying three boxes of paperback books for your buddy who’s moving into his new place and refuses to adopt eBooks can tell you that.

Whatever you do, try not to lose sleep over it. The article is annoying, but check out the comment section: people are getting it, even if the author isn’t. More people are calling her out than cheering her on, and that means we’re winning this thing.