Minimalist Living: Is It Primal? 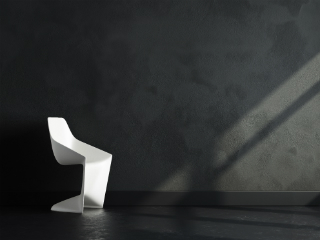 In Do Androids Dream of Electric Sheep, Philip K. Dick imagines a world overflowing with “kipple,” useless objects like junk mail, paperclips, empty matchboxes, old lightbulbs, depleted batteries, and gum wrappers that reproduce when no one’s around. It’s a drab, dreary, depressing vision of the future. It’s not that bad yet, but we definitely have a problem with stuff. Our oceans contain vast swirling vortexes of microplastics. The average American house contains over 300,000 objects, most of them we’ve long since forgotten. “Hoarders” is a popular, horrifying reality TV show. The growing minimalist movement is a response to all this: a concerted effort to declutter, remove non-essentials, and simplify one’s life. Dozens of minimalist blogs, podcasts, books, and decluttering/organizing businesses have popped up. One of the best-selling books in 2014 was the English translation of Marie Kondo’s The Life-Changing Magic of Tidying Up: The Japanese Art of Decluttering and Organizing, which asks readers to discard or donate every possession that does not immediately “spark joy.” Her most recent book is already topping charts and spawning a cult of personality. It’s big.

How does minimalism jibe with the Primal Blueprint?

Readers of my blog are already familiar with my take on the minimalist, or “barefoot” shoe. Unencumbered by supportive arch inserts, stiff soles, and cramped dimensions, the healthy human foot performs, feels, and functions best in a minimalist shoe. It cuts out the fluff and the artifice, the rent-seeking yet unnecessary modifications and upgrades that characterize the modern shoe industry and distills the essentials of what shoe should do—protect the bottom of the foot without changing the heel height or cutting off incoming sensory data. Even if you don’t currently wear minimalist footwear, you grasp the argument, understand the appeal, and agree that minimalist shoes hew more closely to the ancestral environment in which our feet evolved. They are Primal through and through.

Does the same hold true for the growing minimalist movement? Was Grok a minimalist? Sorta…

Most true hunter-gatherers were nomads, meaning they moved around a lot and carried only what they could hold themselves. No pack animals or vehicles, remember. Frank Marlowe, who lived with the Hadza people of Tanzania (one of the last remaining nomadic hunter-gatherer peoples in the world) for years, catalogued their personal possessions. The list looks an awful lot like what we’d expect from a paleolithic group of hunter-gatherers:

The Hadza have an oral tradition rather than written language, so they don’t carry physical embodiments of entertainment. They tell stories rather than watch TV or read novels. They dance and their native musical instrument is the voice, or perhaps a dried gourd used as a maraca.

You’d need the tools you require to stay alive. For the Hadza, that means the objects that help you dig out edible plants, catch and butcher game, and start fires. For most of you, that’s whatever you use to make money. Computer and smartphone if you’re a “knowledge worker.” Whatever physical tools you need if you’re not. Transportation to work. Plus, there’s a couple other obvious things to add to the list:

What else do you need? I’d argue not much. That looks an awful lot like what leading minimalists own.

But what else do you want? That’s where I come up short on minimalism. We want things we don’t need, and there’s nothing wrong with that. Some people just really like having and wearing tons of clothes, keeping vast libraries, or collecting souvenirs from their travels. And though strict minimalists can ostensibly hold on to “frivolous” possessions as long as they do so mindfully, it rarely pans out like that. They’re tossing everything. They’re throwing away every single object that they haven’t used or looked at in the last 60 days (or some other arbitrary period of time).

Overall, though? It’s great. I get it. Eliminating waste, focusing on experiences over possessions, tossing stuff you never use or even look at—who doesn’t agree with that? Heck, that’s how I determine my training—I eliminate the useless exercises and do exactly what I need to do to support my play and my health. And it’s how I try to write, by eliminating unnecessary words. I just can’t suggest that everyone overhaul their entire lives, clear out their storage space, and toss 80% of everything they own in good faith.

A few readers have asked me about tips for minimalist living. There are other and better guides across the Internet from people who write and think about this stuff for a living. My friend Leo Babauta writes beautifully on the subject, if you want more. But here are a few tips that I feel comfortable giving.

Eliminate single-use items. Alton Brown’s number one kitchen tip is to get rid of all single-use appliances like melon ballers (slice them instead) and garlic presses (just smash it with a knife). Unless you’re a pasta chef, you don’t really need that massive pasta maker taking up valuable pantry space. Besides, this is Mark’s Daily Apple—what the hell are you doing with a pasta maker?

Only keep single use items if they’re truly meaningful and valuable to you. If they “spark joy,” in other words.

A food processor can make pesto, quickly dice a ton of onions and garlic, produce fresh nut butter, and a million other things.

An Instant Pot replaces the rice cooker, the crockpot, the stovetop pressure cooker, the steamer, even the yogurt maker. The Bluetooth-enabled version, which allows temperature programming, can even double (or is that sextuple?) as a rudimentary sous-vide.

A cast iron pan can sauté and double as a baking pan.

A good 8 inch chef’s knife (here or here) is all most home cooks will ever need. Just keep it sharpened.

A Kindle can replace shelves of books (although I prefer paper books and won’t ever give them up). Maybe even better, a good local library gives you access to paper books without forcing you to purchase or hold on to them.

A barbell with a few hundred pounds of weights and a pullup bar will replace a room full of machines. Several kettlebells can do the same.

As much as people vilify their overuse (and I’m one of them), a smartphone can replace your map, GPS, flashlight, alarm clock, regular telephone, and many entertainment mediums like TV, gaming consoles, magazines, newspapers, and books.

A simple towel is the most important multi-use possession for any interstellar traveler, and as we progress into the coming Space Age any minimalist worth his or her salt should heed the prophet Douglas Adams’ suggestions.

Replace huge items with smaller ones. I refer to physical size. This isn’t always desirable, but sometimes it is.

A hand mixer can replace a KitchenAid stand mixer (that, let’s face it, you never really used anyway). A hand juicer can replace a huge electric juicer (unless you’re on a juice fast or something, which you really shouldn’t do). A French press makes better coffee than a drip machine.

Eliminate thought clutter. I’m not sure if this is part of the minimalism orthodoxy, but I like the idea of eliminating non-essential decision making. Think buying a quarter cow twice a year and freezing it instead of deciding what cut of meat to buy every night at the grocery store.

Ask “Does this add value to my life?” Whether it’s a knick-knack on the shelf, an old photo, a kitchen appliance, or an article of clothing, asking if the object adds value helps you identify the things to keep and discard.

Don’t identify as a minimalist. Use it as a system for eliminating unnecessary items, decluttering your life (and mind), and focusing on the things that truly matter and bring you joy, but don’t let it define you. I’m “the Primal guy” to many people. I wrote several books on the subject, I’ve maintained a daily blog for years. Look a bit deeper, though, and you’ll realize that all this time I’ve been constructing a way to approach problems, make decisions, and analyze the effects. I’m not giving you The Answer. It’s easy to say “I’m Primal” or “I’m paleo” as shorthand, but I also caution against turning it into a dogma or religion.

The same applies to minimalism. Acknowledge and implement the aspects that work for you. Even if you wholeheartedly agree with every maxim found on the leading minimalist sites, you don’t have to identify as one. And you can own more than 100 things. You can keep non-essential physical objects. Don’t let minimalism become another source of stress.

Minimalism needn’t mean “less stuff” if that stuff actually makes your life run more smoothly and makes you happier. Nothing is all or nothing. If you want to convert your bills to digital but prefer your old physical photos over scanned ones, that’s fine. Just pick what works because getting rid of anything you don’t actually want, need, or enjoy is a positive shift. There are no score cards.

Now let’s hear from you. I’m especially interested in hearing how people in the minimalist community make it work with Primal living. I suspect there’s a lot of overlap.