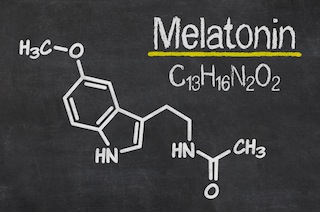 For today’s edition of Dear Mark, I’m answering three questions from readers. First up, what’s the deal, exactly, with melatonin supplementation? Is it harmful? Dangerous? Will it impair our body’s own production of melatonin? Second, a reader wonders whether his past poor health decisions are sabotaging his health today. Even if he’s feeling great now, shouldn’t he worry about the permanent effects from all that pizza he ate and sleep he didn’t get back in the day? And finally, some people recommend against sprinting or high intensity interval training for women. Is it true? Should women only go gently into the gym to tread lightly on ellipticals and avoid all that sweaty, icky fast stuff?

What’s up with melatonin? I’m 50 and have had issues sleeping for several years now–might be related to peri-menopause. Just read in Trust Your Gut that taking melatonin can help with digestive issues such as bloating or cramping. I’m thinking of adding this supplement to my ritual–I already dim the lights and prepare well ahead of time (1-2 hours) for sleep yet wake every night. Any dangers I should be aware of?

Melatonin is actually quite safe.

There’s no evidence that melatonin supplementation will down-regulate normal endogenous production of the hormone. It’s a commonly-held concern with melatonin, but it’s just not the case whether you’re supplementing with 0.5 mg, 2 mg, or 5 mg.

When you take melatonin matters; do not take it in the morning or afternoon. It is a hormone designed by evolution to hasten the arrival of sleep. Supplementation of melatonin, then, is meant to closely mimic the natural elevation of melatonin. It peaks at night, so take it at night.

The real power of melatonin lies in its ability to adjust your circadian rhythm. That’s why it’s integral to my anti-jetlag routine, and why researchers have found to it be far more effective than placebo in dealing with jetlag. Taking it before your desired bedtime in the new timezone will help establish that time as your body’s bedtime. But it also means you can use melatonin to misalign your circadian rhythm if you take it too early, like in the morning. This can have disastrous effects.

Like when postmenopausal women took 1 mg of melatonin every morning at 8 o’clock sharp. This harebrained way to take a sleep hormone drastically impaired their glucose tolerance and insulin sensitivity, partially because of circadian phase shifts.

Don’t eat after taking melatonin and make sure you take it at least an hour (ideally more) after eating dinner. Acute doses of melatonin seem to inhibit insulin sensitivity, regardless of when you take it. This initially sounds “bad” but makes sense, since you generally shouldn’t be eating massive amounts of food at bedtime.

You probably don’t need high doses. Some studies indicate that lower doses (around 0.5 mg) are just as effective as higher doses (5 mg), and possibly more effective. Higher doses are fine, mind you. They just may be unnecessary, and the lower doses are better at mimicking the normal physiological levels.

And because we’re talking about it, here are some other, lesser known uses for melatonin:

To mitigate the effects of light at night. You do your best to avoid artificial light at night. You wear the blue blocking goggles. You burn free range grass-fed tallow lamps. You’ve covered your 50 inch LED TV in blue-blocking saran wrap from the folks at LowBlueLights.com. Yet there are those times that artificial light slips through our best-laid defenses to enter our vulnerable pupils, thus inhibiting melatonin production and phase delaying our circadian rhythm. When that inevitably happens, or will happen in the near future, taking melatonin (5 mg in this study) can partially offset the circadian phase shift.

After a night of drinking, take some melatonin. It can protect the gut against alcohol’s degenerative effects on the epithelial barrier. And if alcohol makes you wake up to urinate in the night (or if you just wake up to urinate too often in general), melatonin may help as low levels of the hormone are associated with nocturia (or nighttime urination).

Melatonin is a pretty benign supplemental hormone, provided you actually need it and take it at the right time (1-2 hours before desired bedtime) and only take as much as you need to get the desired effect (sleepiness).

I have been on a “health kick” for the last year and I feel incredible. However, I’m curious about whether my past habits of a poor diet, no exercise and high stress will effect my current and future health, despite improving my habits recently. I’m only 20 years old if that helps.

Our cells are regenerative. The past can’t be rewritten, but it can be overcome and rendered essentially obsolete.

Even still, what would you do if that weren’t the case? Would you lament the fact that you ate pizza and drank PBR for two years straight in college? Are you going to let your high school late night online gaming and Mountain Dew habit derail your efforts at getting healthy?

If you do that, if you let any poor health decisions made in the past linger in and cloud your mind, you will destroy yourself. This is spilt milk on a cosmic scale.

So your belly fat is a little more stubborn than you’d like. So a sugar monster lurks beneath your resolve, and probably always will.

There is no sense in obsessing over what you cannot change. If you’re going to pore over your past, do so constructively and with a clear objective: to learn from your mistakes and revisit them to identify what you shouldn’t do.

Look: if your mother carried you to term as war raged in the streets around her, food was scarce, liquor plentiful, and stress high, maybe there would be long lasting repercussions due to maladaptive epigenetic triggers to gene expression. You are what your mother, father, and grandparents ate (and experienced), after all. Those are tough.

But even in that “worst case” in utero scenario, what can a person do but continue to make the best choices they can today, here, now?

You’re not helpless, is my point. There are things to do.

Promote autophagy, for one. Autophagy is cellular clean-up, the breakdown, metabolism, and recycling of broken cellular components. Autophagy is anti-aging; it keeps cells running like new (healthy centenarians tend to experience higher baseline autophagy than shorter-lived populations, for example). Because an unhealthy lifestyle may have sped up the aging process, autophagy becomes more important than ever to slow further degeneration.

Get lots of sleep and only stay up late when it’s worth it, like if you have good friends over for dinner that lasts late into the night, or it’s the only time you can watch a really great movie with your loved one curled up on a couch. Don’t stay up late watching reruns of bad TV. Make your sleep deprivation count for something, and keep it acute and intermittent.

Speaking of intermittent, fast every once in awhile. You don’t have to do it on a schedule, or even every week or two. It doesn’t have to be an entire day-long affair. But intermittent fasting has the potential to increase autophagy.

In all likelihood, you’re probably already doing much of it. You’re sleeping better. You’re not eating as much food as you used to eat, and you may even be skipping meals from time to time. How do I know this? You said it yourself: you feel incredible. That’s the most important health marker of all.

Again, don’t worry about your past. Don’t forget your past – because it’s a roadmap of what not to do — but don’t dwell in it.

Thanks for all the good information you put out there! It is much appreciated.

I do not expect a reply. I was just hoping you would consider covering the topic of HIIT-style workouts and female hormonal balance. People like Alisa Vitti advise women to stay away from HIIT because, in her understanding and knowledge, they disrupt hormonal balance, which, as you know, is much more delicate in women than it is in men. Anyway, just wondering if you could give us your two cents on this at some point.

I’m not too familiar with Alisa Vitti’s material, but what I could find suggests that hers is not a blanket condemnation of interval training, sprints, or intense exercise in general. In Womancode, she identifies sprinting as a “stressor” for the adrenals that can sap at a woman’s already-lagging libido. If you’re trying to recovery your libido, she recommends favoring long leisurely walks over sprints. I don’t disagree, in general. If a person is dealing with undue amounts of stress, adding high-intensity interval training may represent too great a stress additive, rendering it less effective if not altogether counterproductive.

But when you look at the sprinting/HIIT literature, it becomes pretty clear: women can benefit from running (or cycling, rowing, Versaclimbing) really fast every once in awhile just as much as men:

You can definitely do too much sprinting or HIIT. But in most situations, sprinting once, maybe twice a week can only be beneficial.

That’s it for today, folks. Thanks for reading and be sure to leave any input or advice for today’s round of questioners down below!