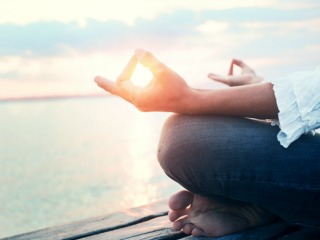 For today’s edition of Dear Mark, I’m answering three questions from readers. First, did I mess up by not mentioning meditation in the neuroplasticity post? Yes, and you’ll find out more below. Next, what are my thoughts on taking astragalus for fighting off colds and flus? Does it work? And finally, does red light therapy have the potential to reduce chronic pain? Does it do anything else?

I’m sorry that meditation is not mentioned, but magic mushrooms are. Meditation increases white matter in the brain (which influences efficiency of electrical signals in brain), and lessens shrinkage due to age. Meditation also has a positive influence on the preservation of telomere length and telomerase activity (when these shorten, we experience adverse aging effects). I would much rather do it the natural way (via meditation) than taking a chance with hallucinogens.

Thanks for your comment, Susan. This is why I love my readers. They call me out.

Everything you say is true. Meditation is a powerful trigger for neuroplasticity.

Mindfulness meditation can undo stress-induced changes to connectivity in the amygdala (the “fear” center).

Experienced meditators show enhanced neural plasticity and even structural changes to the brain (both gray and white matter).

Beginners aren’t doing much. They’re just trying to learn how to make those connections, so the activity is minimal.

Experienced meditators (average of 19,000 practice hours) are in the active learning phase. To reach the desired state, they really have to work hard. The connections are lighting up.

The expert meditators (average of 44,000 practice hours) already have those changes established in their brains, and it takes less effort to maintain and activate them.

And one thing people should keep in mind: Trying to meditate but “failing” isn’t actually failing. It’s the attempt that’s the entire point. Learning to juggle, walk a slack line, or anything else that feels impossible at the start activates neuroplasticity. Failure is a necessary component of learning and brain remodeling.

As for the psychedelics, I absolutely agree that they can be more risky. Being one of the more powerful inputs a person an introduce to their brain, the psychedelics require more respect, caution, and planning than other plasticity inducers. That’s why I recommend that people wait for legalization (or decriminalization), or at least ensure they’re with someone experienced whom they trust. Note that the majority of psychedelics, including psilocybin, have sky high LD50s; it’s almost impossible to consume enough that you reach toxic levels.

Hi Mark! Last year my family and I were hit hard by cold and flu season, and this year I want to be prepared! A naturopath friend suggested astragalus. Can you tell me more, like whether it’s worth it and the best way to take it?

Astragalus, one of the foundational herbs in traditional Chinese medicine, certainly affects the immune system.

Including astragalus polysaccharides to a bird flu vaccine enhances the immune response to the shot (in chickens).

But we don’t have any hard data showing that it can fight flu or cold infections. I do think it’s very plausible and probably possible.

But don’t forget about good old crushed raw (or almost raw) garlic—in my opinion the best anti-cold “supplement” around. Garlic can improve immune function and reduce the occurrence of common colds. Whenever I feel a cold coming on, I’ll crush and dice up an entire head of garlic and lightly simmer it in a big mug of bone broth. You can also try aged garlic, which may be even more potent.

I’ve had chronic pain for years, which has definitely lessened since I went Primal last year! But I still have lingering issues. I keep hearing about red light therapy for chronic pain, and I know some gyms and other facilities market it as a selling point. Have you tried this? Is there anything to the idea?

There’s definitely something to it. It’s not some fringe therapy lacking support in the literature:

In patients with knee osteoarthritis, red light therapy reduced pain scores and increased microcirculation in the knee (which could portend healing).

A 2012 review concluded that red light therapy does reduce joint pain. An earlier review found that it reduces pain specifically in chronic joint disorders, which is good news for you.

It’s even been shown to improve neuropathic pain.

There are other effects, too.

Red light exposure increases blood flow to the skin and improves fracture healing. There’s even evidence that pretreatment with red light prepares your skin for a healthier response to UVB. Makes sense, doesn’t it? Think about those beautiful quiet mornings. You step out the door, gaze toward the sunrise, and everything looks otherworldly. The light has a different quality—it’s actually slightly red from coming in at a different angle and passing through “extra” atmosphere.

Then midday rolls around and the sun is blasting down the bluer, hotter stuff. But because you were there for the sunrise (weren’t you?), your skin is ready.

Go for the red light therapy, and let me know how it goes.

That’s it for today, everyone. I’d love to hear from you. Any experience with meditation, astragalus, and/or red light therapy?

Thanks for reading and take care.