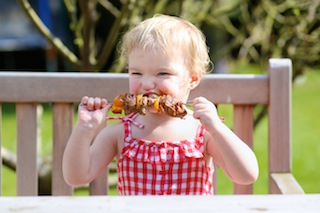 For today’s edition of Dear Mark, I’m answering one question. It comes from Kristen, a new mother to a nine month-old who’s grown so passionate about baby nutrition that she’s decided to start a fresh food business for infants and toddlers. She’s a recent reader of the blog, though, and as such needs a little help understanding the role animal foods like meat and yogurt can play in infant feeding. For many years, the importance of meat in an infant’s diet was downplayed, denied, or ignored in pediatric nutritional guidelines. We now know that’s wrong and kids can really benefit when their first solids include animal products. Today, I explore exactly why it matters so much.

I am a mother to a nine month old, and have been developing a passion for baby nutrition. I am in the beginning phases of starting a fresh, organic baby food company that is made to order and locally sourced. My husband recently turned me on to your blog and the primal lifestyle. I am learning a lot, and I find all of your articles to be extremely fascinating.

My goal is to make the best possible food for babies and toddlers, with the same ease and convenience of store bought food.

I was wondering if I could get Mark’s guidance and opinion on meat and whole yogurt in a baby’s diet. Are there resources that you trust when developing a meal plan for babies and toddlers?

Thank you for your time.

Excellent question (and excellent business idea, if you can do it right). Meat is very important for babies entering the weaning phase. Most parents seem to focus on cramming their kids full of rice puffs and various gruels. Even well-meaning “real food” parents tend to ignore the importance of meat to focus on sweet potatoes, avocados, kale, and the like. Those are good foods. Those are important foods. They just can’t replace meat. The studies are pretty clear on this.

In a recent study in rural Chinese infants, subjects were given one of two complementary foods starting at 6 months of age: cereal or meat. Those who ate meat as a complementary food experienced better linear growth than the cereal group.

Last year, a study found that a high protein intake from meat as a complementary food increased growth but not adiposity in breastfed infants living in Denver. And complementary feeding of red meat in particular can improve markers of blood hemoglobin and hematocrit in infants.

Another study found that kids who ate meat as a first food obtained more than twice as much zinc as kids who ate cereal. Zinc is crucial for brain growth and, indeed, zinc intake tracked quite closely with head growth. Even when grains appear to be high in zinc, the zinc from animal foods is more easily absorbed. As one team of Italian researchers put it, “Zinc requirements for older breastfed-only infants are unlikely to be met without the regular consumption of either meats or zinc-fortified foods.” Since zinc-fortified foods are a recent creation, meat was the likeliest—and only—choice for most of human history.

A 2003 review by a (vegetarian-friendly) anthropologist examining the critical role meat-eating served in human evolution makes a powerful case for including meat in infants’ diets. Animal foods provided the relevant micronutrient- and calorie-density required for optimal growth and survival. They’re easy to digest. There’s very little “wasted” matter in a piece of meat or a slice of liver or a hunk of animal fat. It’s all consumed, digested, and metabolized into useable energy. Wild plant foods, while nutrient-dense and important, contain too much fiber and too few calories to be the primary food source for a growing human child.

We all accept that meat is extremely beneficial to large humans. Why not tiny ones? Meat, and animal foods in general like egg yolks, contain crucial nutrients for human growth, health, and happiness like iron, zinc, protein, fats, and vitamin A. Get them to eat liver every once in awhile and you’re giving that kid the best multivitamin around.

Yogurt is another good food. Earlier this year, a randomized controlled trial found that giving kids aged 12-48 months yogurt with inulin (a prebiotic fiber) reduced instances of fever and improved both social and school functioning. However, the synbiotic (yogurt and prebiotic) group also had more days with watery stool. When it’s introduced in the first year of life, yogurt seems to protect against the development of atopic dermatitis later in life. Yogurt is a safe and effective treatment for acute diarrhea in children aged 6-24 months.

Yogurt isn’t as crucial as meat. Most research has focused on yogurt as a therapeutic rather than complementary food in young children, but this indicates that yogurt is certainly safe for babies. From my reading of the literature, it’s probably good for them too.

Even though you didn’t mention it, fish has a place in an infant’s diet. It’s best to focus on smaller oily fish, which are lower on the food chain and therefore accumulate fewer heavy metals, are less expensive than larger fish, and provide a nice variety of important nutrients like calcium (if bone in), iron, zinc, iodine, and omega-3s. And if you can get a kid to dig bone-in sardines, you can probably get him to eat anything.

Introducing fish around the nine month mark (so get on it if you haven’t already!) may protect against eczema and other allergic diseases. According to another study, the window of opportunity for protection from asthma lies between the sixth and twelfth months.

The best resource for determining the best meal plan for a baby or toddler is the baby or toddler himself. Baby-led weaning is a big thing—and the best way to “train” kids to eat real food. You can leverage this for your business. Get a wide variety of kids together and feed them a variety of foods. If your peers have kids around the same age, bring them around and feed them. See what the kids prefer. Try your best to make a winning liver dish. Do that and you’ll have gold on your hands. Do this every week or every other week and take good notes; this is the best focus group around. They won’t lie. They won’t hold back. They won’t tell you what they think you want to hear. They are the perfect expression of id—pure instinct.

Beyond that, checking the scientific literature is important. That’s precisely what I did (and regularly do) for this answer. Despite the considerable evidence for including it in a baby’s complementary diet, few “official” and popular sources of infant nutrition information emphasize meat. You’ll have to look for it (it’s there).

Good luck with the business. Let me know how it goes!

Thanks for reading, everyone. If you’ve got any input on baby food, baby meat (that didn’t come out right), or giving babies yogurt or other complementary foods, leave it down below. Take care!