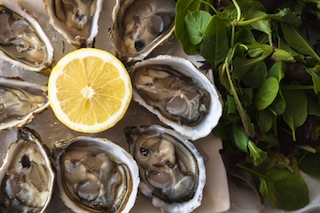 For today’s edition of Dear Mark, I’m answering three questions from readers. First, what’s the deal with lead in crock pots? Some say lead leaches into the food when we cook with crock pots, while others aren’t so sure. And if the leaching of lead from crock pot ceramics into our food is, indeed, a problem, what equivalent product do I recommend? Next, a new study indicates that human norovirus is highly prevalent in oysters. Should we stop eating the canned smoked oysters from Crown Prince? And finally, do we really need to consume extra carbs with our creatine to get the full benefits?

Fall is here & I just got myself a new larger crockpot! I have been using it a TON (even though it’s not actually cold here in the south yet).

I was enjoying it immensely until I innocently Googled a question about my crockpot & found warning after warning about crockpots containing lead & leaching into our food, especially when we add acids like vinegar for bone broth or tomatoes in chili.

I checked crockpots out on MDA & found lots of recipes, but no warnings.

Should I be concerned about this? I have growing children. And I certainly don’t want to cause myself problems either.

I’d love for you to give us the lowdown.

For millennia, lead has been used in ceramic glazes. And eating and cooking food using ceramic cookware glazed with lead can certainly cause lead poisoning. Consider the couple who got lead poisoning from brewing kombucha in a lead-glazed crock, or the person who did the same with kefir and got similarly poisoned. We know that acidic solutions can leach large amounts of lead from lead-glazed ceramics. It’s a real possibility.

That said, crockpot manufacturers are aware of the problem and ceramic glazes these days are universally advertised as lead-free. Hamilton Beach claims its cookers contain no measurable amount of lead. One blogger went around asking the top crock pot companies about lead, receiving assurances from each company that either they had no lead in their glazes or crocks or that their lead levels were within FDA limits. But FDA limits technically allow some lead. And if you’re cooking meals for growing children with developing brains (whether they be in or out of the womb) for whom even tiny amounts of lead can hamper that development and cause epigenetic changes that reverberate through life, you’re right to be extra cautious.

Still, another blogger tested a few top brands (including a model from 20 years ago) with an XRF gun and found no evidence of lead in any of them. Personally? I have one. I don’t use it a whole lot anymore (you’ll learn why down below—it’s not due to lead), but I don’t really worry about the lead issue.

To be extra sure, buy a test kit online and run the tests yourself. In addition to doing a swab test of the ceramic surface and a leaching test using vinegar heated for four hours, I’d suggest preparing a typical meal in the pot, making sure to incorporate an acid (vinegar, tomato, red wine), and testing the food. To be extra, extra sure, take your crock pot and an acidic meal sample down to a third party tester. You should be able to find one on Google or Yelp (just search “lead test”).

Here’s what you do if you’re a real worrier and can’t get the notion that you’re poisoning your family out of your head:

Get an Instant Pot (or this earlier version which is just as good).

I’ve talked about these babies before. It’s an electric pressure cooker that plugs into the wall, sits on your counter, and renders the toughest slab of gristly animal into melt-in-your-mouth tenderness. Plus, Instant Pots can also make fantastic broth in a fraction of the time it takes on the stove, as well as act like crock pots, rice cookers, steamers, sauté pans, and other functionalities I’m probably forgetting right now. Best of all, the Instant Pot cooking pot is stainless steel. That means it’s easy to clean, non-reactive, and contains no lead at all.

You’ll be getting several-times the functionality of the crock pot without any of the worry—misplaced or not—over lead. Your kitchen game will increase exponentially.

I love the Crown Prince smoked oysters (Trader Joe’s) and with your blessing/recommendation, enjoy them often. However, just received this information/link. Now I am concerned. Can you comment. I value your opinion. Thank you.

“Oysters not only transmit human norovirus; they also serve as a major reservoir for these pathogens, according to research published August 28 in Applied and Environmental Microbiology, a journal of the American Society for Microbiology. ‘More than 80 percent of human norovirus genotypes were detected in oyster samples or oyster-related outbreaks,’ said corresponding author Yongjie Wang, PhD.”

Then they’re added to cans along with oil (in this case olive oil) heated to 100 °C.

The cans are sealed and placed in a pressurized steam bath for 70 minutes at 120 °C.

Norovirus won’t survive all that heating.

The lead author of the study agrees, saying “eat them fully cooked, and never raw.” He’s totally cool with people eating oysters, as long as they’re cooked. Now, I’m not sure that’s necessary for everyone. I love slipping oysters down my throat. Raw, living oysters are one of the rare foods I can eat and intuitively know that I’m consuming something extremely nutritious. I almost get a burst of energy and good will from a half dozen of the raw, briny things. Besides, norovirus, while unpleasant, isn’t dangerous to anyone but the most immunocompromised, like the elderly and babies. The biggest danger from norovirus is the dehydration that can occur when you’re vomiting and spending your entire day on the toilet. But I don’t know too many infants getting pulverized raw oyster in their bottles, and I’d suggest that seniors derive more benefits from the bioavailable minerals oysters provide than they risk eating a few oysters.

My name is Zach Resnick and I’m a big fan of the blog. I’m currently trying to stay in nutritional ketosis, but I’m also trying to build muscle mass. I’ve looked into creatine monohydrate as a supplement and have started taking it a few days back. However, after doing more reading on the subject the consensus seems to be that taking creatine with lots of carbohydrates is recommended for optimal absorption.

Given that I’m prioritizing staying in ketosis, do you know if it makes sense to take creatine just with my post workout meal as per normal? Is it ok to add a few extra carbs than normal to help with the creatine? I just fear much of the creatine I’m taking will be wasted and cause digestive issues if I don’t add some carbs back into my diet.

A 2005 study in experienced swimmers found that loading creatine was just as effective with carbs as without them. One group took 5 grams of creatine + 100 grams of carbs every day for five days. The other group just took creatine, no carbs. After a baseline performance test, they repeated the test after the loading phase. Both groups experienced similar benefits to swimming performance after taking creatine.

But you’re also good if you take a few carbs with your creatine. If you want to do that and stay mostly ketogenic, you have a couple options: the cyclical ketogenic diet (CKD) or the targeted ketogenic diet (TKD).

On a CKD, you spend the majority of the week in ketosis, only eating carbs on one or two days. You might be ketogenic Monday through Friday, exercising all the while and capping the work week off with a really intense glycogen-depleting training session, then go high-carb, low-fat Saturday through Sunday to refill your depleted and newly-insulin sensitive muscle glycogen stores.

On a TKD, you stay ketogenic but selectively eat carbohydrate before, during, and/or after your workouts. Most people seem to benefit most from pre- and peri-workout carbs. These aren’t large carb loads—15-30 grams of relatively fast-absorbing, simple carbs. Baked potatoes, white rice, sweet potatoes are excellent options. Fruit works, too.

Whichever route you choose, just take the creatine around your workout. There may be some small advantage to taking the creatine post-workout.

Creatine shouldn’t upset your stomach or affect your digestion, but it might increase your water requirements. Just be aware of them and drink water when thirsty, as always. Consider sprinkling in a little sea salt, too.

That’s it for today, everyone. Thanks for reading and be sure to chime in with your comments and input down below!