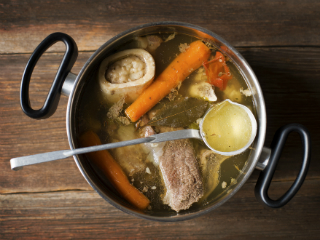 For today’s edition of Dear Mark, I’m answering three questions. First one concerns the lead content in bone broth. A 2013 study reported elevated levels of lead in chicken bone broth. And not the canned or boxed stuff, but the real thing: broth made from actual chicken bits. Should you worry? Second, do cooked and cooled potatoes really make the carbs less problematic for people who typically try to avoid them? How and why should people who otherwise avoid potatoes consider eating cooked and cooled ones? And finally, do I have any good, simple strategies for dealing with stress? Why yes, yes I do.

Is anyone concerned about the amount of lead in bone broth? I love bone broth, but now wondering…

I’m not too worried.

That study had some limitations, which the Weston A Price Foundation covered pretty well. Ignore the meandering quasi-conspiratorial tangents and focus on the relevant points.

It tested broth from just one group of chickens. There was no real control group. They tested broth made from bones, broth made from meat, broth made from skin and cartilage, and plain tap water, but everything came from the same farm using the same chickens raised under the same. Since lead comes from the environment, the feed, the water. We already know that lead accumulates in the bones. What matters is how much lead the animals you’re using to make broth are exposed to throughout their lives. I’d like to see a comparison between chicken broths made from animals from different farms and environments.

Most of the lead was in the skin of the chickens. Why? Even though lead accumulates primarily in the bones, not the skin and cartilage, the skin and cartilage broth had the most lead. This indicates something weird was going on with these chickens. Cartilage receives very little to no blood flow, so it probably didn’t contribute much if any lead. That leaves the skin. How would so much lead get into the skin when we know that most consumed/absorbed lead ends up in the bones? Well, chickens are suckers for a good dirt bath. If they have access to it, they’re constantly scrounging, rolling, and “dusting” around in the dirt. Dirt readily accumulates lead from car exhaust and lead-based paint. If a chicken’s rolling around in lead-contaminated soil, they’re getting lead all over their skin and that lead will end up in your broth.

The animals’ environments and upbringing are everything. The WAPF describes a follow-up study into two broths made from grass-fed beef bones and pasture-raised chicken bones that was unable to detect any lead in either. This despite the chickens having plenty of access to dirt and all the same dirt-dusting proclivities their kind is known for.

I wouldn’t worry too much, but I would be serious about where I get my bones and/or broth.

Dear mark,
I can’t find the answer to this question anywhere on your site, although I’ve tried for countless hours.  How much cooked and cooled potatoes can I safely eat and still stay within the weight loss/maintenance part of your carb curve?  In other words, how much RS potato salad CAN I have without a glucose spike?
Thanks for your help,
Jen

Cooking and cooling a potato doesn’t erase its digestible carb content, nor does it eliminate the glucose spike you get from eating it. It just makes it a little less glycemic and feeds your gut bugs. It’s a “lower” carb way to eat potatoes. You can get away with more of them.

A new study examined the effects of cooking and cooling a dozen or so varieties of potato.

Estimated glycemic response was reduced by 10-15% across the board after cooling the cooked potatoes. I say “estimated” because they didn’t actually feed the potatoes to anyone. They dissected and tested samples from each potato for resistant starch, fiber, and digestible starch after different cooking methods and found the more RS and fiber, the lower the estimated glucose response.

But I think actual cooled potatoes will help even more than the estimates in actual humans. For one, you’ve got the lower glycemic response due to reduced digestible carbohydrate. Fewer carbs to digest, less glucose to reach the blood.

Two, you’ve got the insulin-sensitizing effect of consuming resistant starch. RS improves insulin sensitivity, even in people with metabolic syndrome, and makes glucose less of a problem.

I don’t have any hard numbers for you because every potato is different. But it appears you can count on at the very least a 10-15% reduction in postprandial glucose (and likely more).

I have such a hard time managing my anxiety/stress. I am in counseling now, but I was wondering if anyone could share any personal techniques that they find soothing or calming. Really, anything you do that helps you de-stress would be great to hear! Thanks all. Stay well!

I’ve been in the same boat for most of my life. Handling stress just doesn’t come naturally to me. I have some more involved methods for dealing with stress, like paddle boarding or dropping everything for a day to just take a break, but physical movement is the simplest, easiest tool I have.

Movement is my go-to. It’s healthy—you’re not stuffing your face with something sweet and regretting it a minute later or lighting a cigarette or taking a shot of whiskey. It’s productive—you’re getting an essential aspect of a healthy day out of the way. It’s engaging—you can’t help but focus on how your body’s navigating through space.

If I’m stuck on a post or paragraph and I can’t quite seem to get over writer’s block, I’ll hop on the slackline out back and go for a few minutes. This demands my close attention to the moment, so I can’t think about the work I’m not doing. Then I head back in and suddenly words flow. With writer’s block, my main problem is that I’m thinking too much about the writing. I actually need to take a break and think about something else. You can’t brute force your way past.

For general stress, I’ll just go for a walk. Even if there’s resistance, I push through it. If I can make it through the first three minutes, everything falls into place and the stress melts away. I’ll even sometimes take those stressful business calls on a walk with me. Just say “hold on a sec,” head out the door, and continue the phone conversation as I walk.

One of my secret visions/hopes for the near future is the ability to write and edit content while walking, probably through some neural/eyewear/augmented reality interface. Like having a document projected into the world that you can edit with your mind. One day.

Okay, that’s it for today.

How do you guys deal with stress in the moment?

Do cooked and cooled potatoes feature in your diet?

What do you think about lead in broth?