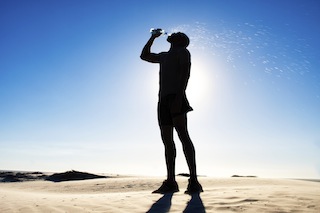 For today’s edition of Dear Mark, I’m answering three questions. The first one concerns a potentially combative and controversial topic: ketogenic diets. What’s the deal with their effect on testosterone? You can find keto anecdotes across the web both inspiring and flaccid, but what, if anything, does the science say? Next, might there be a way to derive beneficial hormetic effects from acute bouts of dehydration? It seems like every other stressor can actually make a person stronger, so perhaps an otherwise wholly negative one like dehydration might as well. And finally, is the prebiotic fiber known as isomalto-oligosaccharide safe and/or good to eat?

There is a ton of conflicting information on the internet about whether the standard ketogenic diet increases or decreases testosterone levels. What is your opinion?

In women with PCOS, a ketogenic diet lowers testosterone. Sounds bad, right? In PCOS, lower testosterone is actually an improvement as the disease is characterized by unnaturally high testosterone levels. What about in men, the population worrying about T levels most — does keto improve testosterone in them, too?

Unfortunately, there aren’t many studies that examine the effect of ketogenic diets on testosterone in males. We have a bit of data about the opposite — an increase in carbs and a reduction in fat. In an older study, men who customarily ate a 40% fat diet were placed on a 25% fat diet; the lower-fat diet also had a higher PUFA/SFA ratio and more fiber. Their total and free testosterone levels were measured pre- and post-intervention. After going lower-fat and higher-carb, total T dropped from 22.7 to 19.3 and free T from 0.23 to 0.2. Resuming their old diets partially restored their lagging T levels. Again, this isn’t a keto diet study, but it gives us a small inkling. Higher-fat, lower-carb appears to be safe and perhaps beneficial for testosterone.

But neither of these papers looked at ketogenic diets. Low-carb just isn’t the same as full-blown ketosis. We can’t extrapolate. So let’s speculate.

How ketogenic dieting might both lower and raise testosterone: Ketogenic diets tend to be inadvertently hypocaloric, which is why so many people have so much success using them for weight loss. When you eat fat and protein to satiation, reduce carbs, and avoid hyperinsulinemia, your appetite normalizes and you’re actually able to tap into stored body fat for energy. For many people, this makes it hard to eat as many calories as before. This is great if you want to lose weight. Indeed, in obese men, a low calorie diet will improve sexual function and raise testosterone. The effect of weight loss (and consumption of many thousands of calories in stored body fat to make up for the “missing” food) is enough to boost testosterone production.

If you’re lean, the effect likely changes. You don’t have the luxury of eating pounds of your own body fat. Ultra low calorie diets – which for some, ketogenic diets become – take their toll on hormonal health. Lots of the CRON crowd — the calorie restriction for longevity guys — suffer from poor libido, likely stemming from low testosterone levels. Also recall what happens to the hormonal profile of bodybuilding competitors as they approach competition and embroil themselves in heavy training and dieting. Their testosterone plummets.

As I’ve said before, I’m suspicious of chronic ketosis for most people. I’ve heard incredible stories from people who thrive on it, but I’ve also heard disappointing reports from people who’ve failed. What seems to be a safer bet for almost everyone is spending some time in ketosis, not all of it. Everyone can probably benefit from short dalliances with the ketogenic state. Most people don’t need to remain ketogenic for perpetuity, and they might even suffer for it.

The effect ketogenic dieting has on testosterone comes down to a few things, most likely:

Are you eating enough food?

Are you consuming testosterone-supporting nutrients like zinc, cholesterol, magnesium, saturated fat, and vitamin A?

Are you noticing any negative changes in libido?

Are you using it to lose weight — and succeeding?

I’d love to hear from people reading this: how has ketogenic dieting affected your testosterone?

Been a long time reader. Found a lot of your articles to be very enlightening and thoughtful. For example, after reading your write-up on sauna health benefit, I’ve been striving to go use sauna 2-3x a week. In a related note, after profuse sweating from working out and sauna usage, I am generally pretty dehydrated. Normally I’d drink some water from the fountain at the gym to rehydrate, but I was thinking if there would be any health benefit via hormesis from temporary acute dehydration. My home is 20 mins away from gym, so it’s not long I’m putting my body in a period of stress. Plus, I have more options of rehydration once I get home. Like to know your thoughts. Thank you.

It may be that short, targeted bouts of acute dehydration improve kidney function. Most research finds that the harder a person exercises, the better their kidney clears creatinine from the blood. Pro cyclists, for example, regularly dehydrate themselves over the course of a race and have better GFRs (glomerular filtration rate, a measure of kidney function) than recreational cyclists and sedentary people.

Whatever you do, don’t feel the need to “drink ahead” of your thirst. By all indications, an athlete’s performance actually suffers when they try to stay ahead of their thirst by drinking before they feel thirsty. Those who use thirst as a guide to hydrate enjoy better performance than those who drink before thirsty or ignore their thirst.

I don’t think you need to abstain from water after a workout. I think you should just replenish your fluids when thirsty. The stress you experience training while thirsty is probably enough to provoke an adaptive response, if one’s going to occur.

For me, I’m rarely thirsty in the middle of a workout, but I’m definitely parched immediately after. My guess is it’s worked, since I can hold my own without constant access to water.

Still, be very careful with this one. Most people would think you’re crazy to even try, but I doubt it’ll hurt. If you’re really dehydrated, you can always stop for a drink along the way (or keep a bottle of water on hand).

As a 19-year-old in the digital age, the humor is not lost on me as I type this–asking your opinion on something called isomalto-oligosacchardies (IMO)–when the abbreviation “imo” is commonly used among my peers to communicate the phrase “in my opinion.”

Anyway. IMO: Stumbled across a recipe that called for this stuff. The brand was “VitaFiber.” The blogger touted the ingredient for being an alternative sweetener that is not a gut-disrupting sugar alcohol. In fact, as the name would suggest, it provides prebiotic fiber. I’ve read that it can be made from starch derived from just about anything. I’m assuming IMO made from grains would be out then. But what if it was from tapioca?

imo…tbh (to be honest)…the amount of experimental paleo baking I do, combined with my love of fruits, I’d like an option for sweetening a treat without necessarily relying on raw honey or grade B maple syrup. I know this is like the holy grail for primal beings like me with a stubborn sweet tooth and vivid memories of wheat/sugar/junk-based desserts & candy. So I understand if you’re sick of the sweetener questions. With the overwhelming number of options out there, and all of the businesses looking to dominate the market, I haven’t dwelled too much on the topic myself. I haven’t tried stevia yet, which seems to be one of the more primal-approved options. But I often wonder whether there is in fact a good (not just decent) human diet “hack” for this issue.

Many thanks for your time and all that you do.

Isomalto-oligosaccharides aren’t common in nature, which makes people wary. That’s understandable. But we should do our due diligence and really look at the evidence before condemnation or celebration. Let’s do that now. What does the research say about IMO?

That’s it for this week, everyone. Thanks for reading and be sure to weigh in with your thoughts and responses down below!