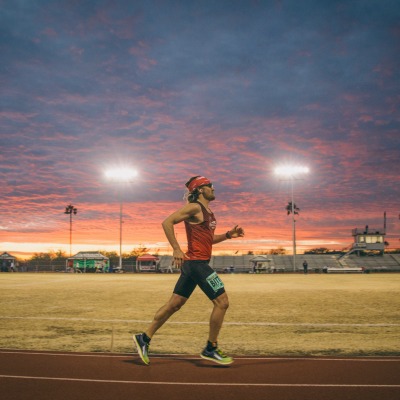 Zach began experimenting with a primal-style and comparatively low-carb diet way back in 2011, around the time he was making his name in the ultrarunning scene. “It made me really efficient at metabolizing fat,” he explains. That’s an understatement! When Zach participated in the FASTER study, which looked at fat and carbohydrate metabolism in endurance athletes, his results showed that at his peak he could burn 98 percent fat and 2 percent carbs. He topped out at burning 1.57 grams of fat per minute, well above the once-theorized ceiling of 1.0 g/min. On race day, that means Zach can fuel less that his competitors. “Fueling is a hassle,” says Zach, “and the less you have to do it, the better.” Harnessing his impressive fat-burning abilities, he won the national 100K title in 2014, running 6:30/mile pace for seven hours while consuming only 156 calories per hour. Another time he ran 38 miles of the grueling Western States trail in a little over eight hours—a very comfortable fat-burning pace for Zach—on only water, electrolytes, and a couple bites of fruit at an aid station.

Over the last several years, Zach has continued to tinker with his nutrition, following a largely ketogenic approach and using nutrient-dense carbohydrates strategically to support periods of heavy training and racing. According to his blog, zachbitter.com, his typical daily intake ranges from 5 to 30 percent carbohydrates. In particular, he uses a ketogenic eating strategy to support improved recovery after hard workouts and races, as well as to maintain his tremendous fat-burning ability. Zach sets a great example of how to use ketogenic eating and an n=1 approach to arrive at an optimal training strategy.