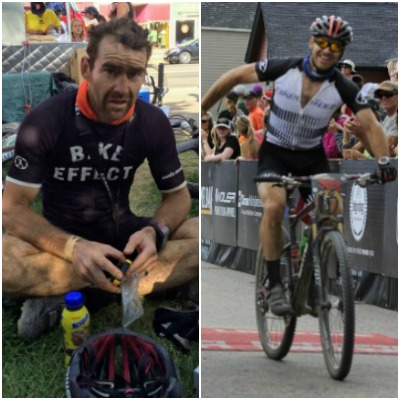 Today, Ted McDonald is the picture of health. A multitalented fat-burning beast, you might find him teaching classes at his Malibu, California, yoga studio, unless he is off competing in an endurance run or bike race somewhere in the world. But this wasn’t always the case.

He partied hard in his youth, and even after he cleaned up his act and found yoga and sports, he spent more than a decade following conventional wisdom, especially when it came to diet. Like so many people, he would start his days with steel cut oatmeal and maybe a shake. Then he would head out on a training run, armed with gels, bars, and hydration products. Afterward, he would have another shake packed with frozen fruit, bananas, and sweetened almond milk.

Nor was a stranger to chips, ice cream and other carb-heavy food products. “Back then, I was fueling on carbs,” Ted recalls. “I was of the belief that carbs were my fuel. I needed protein to rebuild muscle and carbs to fuel performance.” Why would he cut back the carbs? He was strong, always finishing in the top 10% of his age group in races. There was nothing to worry about… until blood tests revealed that he, a thin, fit, strong guy, was developing insulin resistance. This was the wake-up call he needed. He started reading the work of Drs. Attia, Phinney and Volek and began the process of eliminating most of the carbs (and all of the unhealthy ones) from his diet.

To accelerate the process of fat-adaptation, Ted was also doing fasted morning workouts, a strategy he learned from his friend, BMC team nutritionist and ultramarathoner Barry Murray. The first test of his new approach was a half marathon that he had raced three years earlier while still carb-fueled. In that race, he placed 15th overall. This time, Ted crossed the finish line in 1:51, 8 minutes faster than his previous attempt, and 7th overall.

Not only has Ted’s performance improved since becoming a fat burner, but so too has his blood work. Only 3 months into his new diet, a follow-up blood test revealed that his good cholesterol had gone up 15%, while his triglycerides went down 15%. These days, Ted’s training day diet consists of water or green tea in the morning. He doesn’t take gels with him on his runs anymore, but if he races for more than 2 hours, he takes a bar. He will take a bite of a bar every hour after 2 hours until he’s finished. After he’s done, he will have a protein shake and an omelet filled with cheese, avocado and veggies. As a non meat eater, the rest of Ted’s diet is made up of nuts, seeds, lots of non-starchy veggies, and (of course) fish.