Co-founder of Trulia.com and CEO of Virta Health, Sami Inkinen is one of the world’s most accomplished endurance athletes who also has a high profile career as a Silicon Valley entrepreneur. Sami has taken keto experimentation to the extreme, and quantified everything beautifully to illustrate the amazing transformation that happens when you become a fat- and keto-adapted as an athlete.

The Keto Reset Diet goes into great detail about how keto can benefit endurance performance by making athletes virtually bonk-proof—able to perform for hours on end with a dramatically reduced need for carbohydrates as a fuel source. Sami’s story is told in further detail in Primal Endurance and on his blog. Here, he takes time to share some extensive thoughts on how you really can succeed in endurance sports while eating ketogenically, if you follow the correct approach.

Sami and his mind blowing performances and self-experimentation results serve as a true inspiration for endurance enthusiasts to try something new with an informed and disciplined approach, and reap phenomenal benefits. Not just performance benefits (how about Sami moving his theoretical “time to bonk” value from 5.6 hours while carb dependent to 87 hours when fat adapted?!) but also health and freedom from disease risk factors driven by high carb eating and burning patterns. Enjoy the following commentary from Sami, encouraging athletes to consider a ketogenic approach.

Traditional advice for endurance athletes is to “carb-load” and to consume enough carbohydrates before, during, and after a race for fuel through the entire event and for recovery. But what if I told you that you could run or ride your bike for longer without hitting the dreaded wall? What if I told you that you could even recover faster and improve your metabolic health? All of this is possible, but only if you throw out the advice we’ve all been given about carbohydrates and exercise.

There’s a different path when it comes to fueling our bodies—a ketogenic diet. Restricting carbohydrates and relying on most of your calories as fat induces a state of nutritional ketosis, meaning that your body will use fat—both dietary and body fat—as its primary source of fuel. Even the most lean athlete has tens of thousands of fat calories on hand, so it makes sense to use them! The key is knowing how.

Here are 3 of what I believe to be the most compelling reasons for an endurance athlete to make the switch from a high-carb to a high-fat nutrition plan:

1. You can become virtually bonk-proof

As athletes, we want to be our best and be able to compete at our best. We prepare for months or even years with training plans for both our performance and our nutrition in hopes that we leave our best out on the course. Despite our strongest efforts, many of us know it’s possible to get to a point during exercise when we ‘hit the wall,’ regardless of how well-trained and prepared we are going into an event.

‘Bonking’ or ‘hitting the wall’ typically occurs after about 2 ½ hours into continuous, hard exercise, which corresponds to when glycogen (glucose stores) is really low. When exactly this happens depends on how long and how hard you’re pushing, but when your body can no longer meet the energy demands, it is essentially an energy crisis for the brain. You’re fatigued, not able to think clearly, and if you’ve ever experienced this during an event, you know that it’s simply miserable.

Ever since I experienced my first bonk on my bike, I’ve tried to figure out how to make myself bonk-proof, and eventually realized that I couldn’t do this by simply adding more and more carbs to my nutrition plan. When we eat and train with carbs, our bodies rely on them, but we have a limited ability to store them with a capacity of only 500-600 grams of glycogen (glucose stores), or about 2,000 calories. I’d have to eat gels and bars every 30 minutes to extend the point at which I’d run out of energy, but the ability to eat and absorb that energy while exercising is limited. Alternatively, we have the ability to store nearly unlimited amounts of fat. Even a very lean and small (~120lbs) athlete with low 7% body fat still carries about 30,000 calories of fat. Imagine being able to use that during a race!

So I learned how to rely on fat instead and my brain can rely on ketones (that are produced from fat by the liver) for a nearly unlimited supply of fuel. I’ve essentially made myself bonk-proof, and with fat as my primary source of fuel, I don’t need to eat anything at two hours anymore. It’s literally a game-changer! But becoming a fat-adapted athlete takes time. It doesn’t happen overnight. Just like training for an Ironman doesn’t happen in a week or two, neither does training your body to more efficiently burn fat. Once you become adapted to nutritional ketosis, or keto-adapted, there are several benefits. You rely less on the limited amount of carbs your body has and can more easily and quickly rely on your body’s fat for fuel. You increase the rate at which you utilize fat and you no longer ‘hit the wall’ at 2 ½ hours into an endurance event, even if you don’t have food available. In fact, the recent FASTER study demonstrated that fat-adapted athletes oxidize (i.e. burn) fat at a rate more than twice that of high carb athletes, which means the body has a better ability to access its fat and oxidize it for fuel.

2. You can recover faster

Being a successful high-performing endurance athlete isn’t just about the moments when you are working out or competing. It is also about how quickly you recover so that you can resume your usual workout regimen. Most athletes are familiar with the inflammation, soreness and swelling that comes after any hard workout or race. While some inflammation is necessary to increase muscle strength and is part of recovery from exercise, too much inflammation can interfere with the body’s repair process. It’s a balancing act. Many athletes will try just about anything to reduce post-workout inflammation, from ice baths to taking anti-inflammatory medications to chugging beet juice.

The less pain and soreness you have post-workout, the sooner you can go hard in your workouts again, and the better you might perform in the next race. After fully adapting to nutritional ketosis, I felt (subjectively speaking) a lot less sore and got rid of frequent nagging things like inflamed achilles tendons following the same workouts—racing my wife up Mt. Tamalpais [A 2,500-foot peak in Marin County, CA—just North of San Francisco], while just as strenuous as the times I had done it as a high-carb athlete, didn’t leave me with the same muscle soreness in the days after. It turns out that ketones don’t just function as important energetic molecules, but they have positive effects on cellular processes as well. Studies show that a well-formulated ketogenic diet reduces inflammation levels. Furthermore, I can get right back on the bike the very next day, meaning that I can train more frequently and don’t need as many recovery days.

3.  Your health may not be what it appears

The appearance of physical health and “fitness” can hide serious medical issues. Even if you are fit, strong, and lean, you may not be metabolically healthy.

I had no idea that this was true for me until around 2011-2012. I became a triathlon world champion in my age group and found out that I was prediabetic and metabolically unhealthy—my glucose values were consistently way above healthy ranges. Despite my years of high-level endurance sports, strict performance diets that perfectly aligned with the dietary guidelines, and very low body fat, I was on my way to developing type 2 diabetes. I was shocked to find out that following the low fat and ‘quality’ high carb dietary recommendations had led me to the brink of diabetes, but I was also determined to dig myself out of this hole. Type 2 diabetes and prediabetes are typically treated with medications (and, for some people, eventually surgery), but I wanted to try fixing my metabolic health myself. If following the dietary guidelines had led me to prediabetes, I thought there might be a way to reverse prediabetes—perhaps even by following the opposite approach.

My deep dive into published research led me to realize that the high carb diet recommended for athletes instigated my prediabetes by constantly spiking my blood sugar, and that my intense, regular, high-volume exercise had not been enough to keep my blood sugars in control. It turns out you can’t exercise enough to outrun bad nutrition advice. After finding peer-reviewed clinical research demonstrating that a high-fat, moderate protein, and low-carb ketogenic diet could help me reverse my prediabetes, I completely changed my nutrition plan and started tracking my blood sugar and ketone levels. I was amazed at how useful the regular biomarker information was to tweaking my diet around my body’s individual response.  Everyone truly responds differently to the same foods based on genetic differences, and you never know for certain until you test regularly. By switching to a well-formulated ketogenic diet and a data-driven approach, I successfully reversed my prediabetes and improved my metabolic health across the board.

The bottom line is that sustained nutritional ketosis has allowed me to:

You can learn more about nutritional ketosis here in an FAQ by Dr. Stephen Phinney.

In Sami’s journey to becoming bonk proof, he painstakingly tracked his progress in repeated laboratory tests where he measured fuel substrate utilization while riding a stationary bike at a comfortable pace. The results as explained in this graph series (below) are astounding.

Take a look at Sami’s graphs from repeated performance tests in the Stanford laboratory, as he progressed from pre-diabetic sugar burning machine to a fat burning beast: 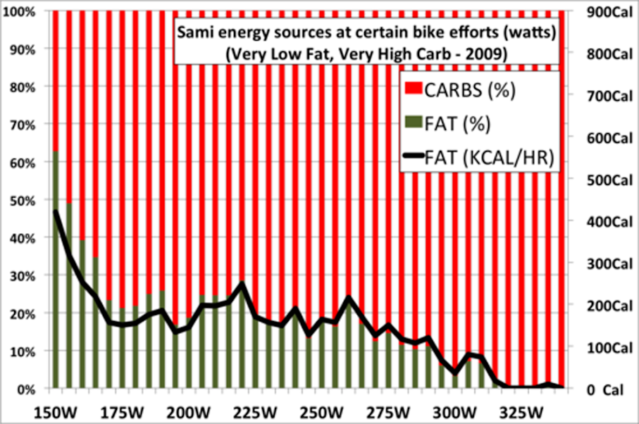 Graph 1 (above): Results of Sami Inkinen’s initial performance test from 2009. At 300 watts, he is burning almost all carbohydrates—destined to bonk after a couple hours, maybe three if he can slam down some gels en route. 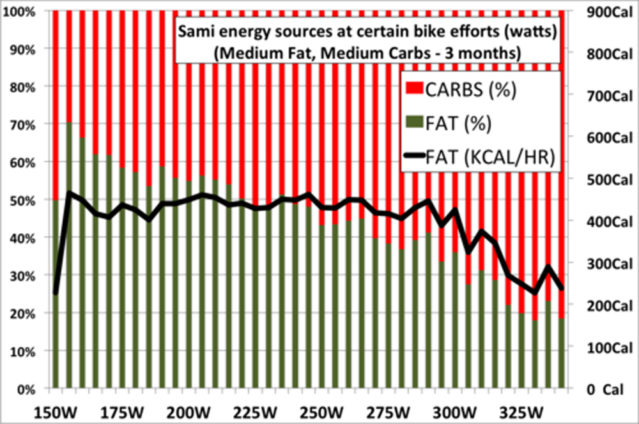 Graph 2 (above): Sami’s second performance test at Stanford, coming off three months of devoted carb restriction and fat emphasis in the diet. Here, at 300 watts, Sami has doubled his fat oxidation to over 400 calories per hour, going from burning almost all carbs to about half carbs, half fat. 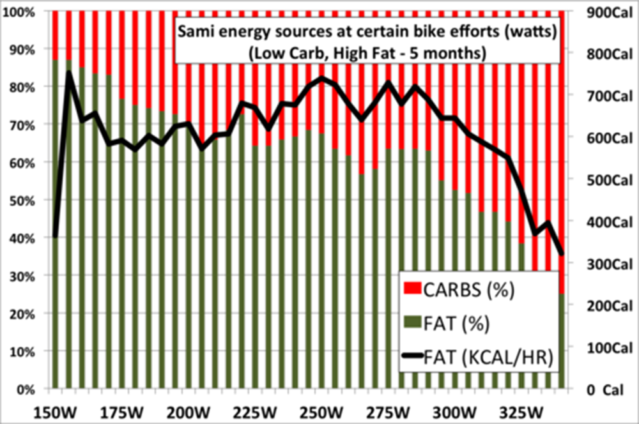 Graph 3 (above): Sami’s third performance test, on the heels of his amazing Clydesdale-style Wildflower victory, where he beat some of the nations best amateurs despite carrying 200 pounds (due to preparing for an interesting trip to Hawaii—details follow.) Notice the fat utilization at low intensity of around 85 percent of total energy and 750 calories per hour—triple that of the levels he delivered on his first test!

Sami’s successful transition to fat adapted athlete tee’d up one of the most remarkable endurance performances you will ever hear about. He and his wife Meredith Loring rowed a small boat from San Francisco to Hawaii—2,400 miles in 45 days. In the process, they raised $300,000 for the Institute of Responsible Nutrition, an advocacy group headed by anti-sugar crusader Dr. Robert Lustig. Because their journey was unsupported, Sami and Meredith traveled with some one million calories—ultra low-carb, high-fat selections like dehydrated beef, salmon, and vegetables, along with fruit, nuts and olive oil. Sami also lost 26 pounds on the journey, indicating that a combination of ingested fat and stored fat were his main fuel sources.

A feat like this completely reframes the carb paradigm that endurance athletes have long existed in, whereby sustained endurance efforts were highly dependent upon successfully ingesting and absorbing a steady stream of carbohydrate calories. No, there was no bonking allowed aboard a twenty-foot rowboat in the middle of the Pacific Ocean! We’re grateful to Sami for sharing his keto insights and self-experimentation.