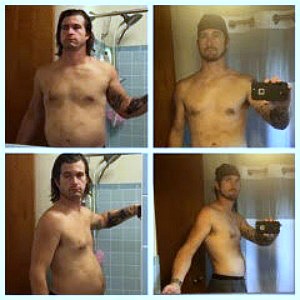 Relationships with food can be incredibly complicated. Food plays with our emotions and impacts not only our physical selves but our psychological selves too. Over the course of my life I’ve gained and lost over 100 pounds. I’ll never forget my first affair with weight loss. I was 25, just married to my amazing wife. Some friends and I decided on a weight loss challenge prior to a beach vacation. Game on. I weighed in at 211. I’m 6 feet tall, so I wasn’t that overweight, but I could no longer see the six-pack abs I once had. Thanks to severe calorie restriction, massive willpower, and two hours or more a day at the gym or exercising, I lost 36 pounds, weighing in at 175. (I didn’t win the competition, though.)

I don’t remember what my diet looked like. I know I didn’t give up drinking Miller Lite. Pretty sure I stuck with mostly vegetables and chicken, and ate lots of salads, yogurt, and granola, and emphasized low fat and low calorie. One thing I’ll never forget is that first stop on our trip the Outer Banks. We all went to IHOP. I felt lost. I felt like I was betraying all that I had worked for. I don’t know what I ate, but I remember the feelings. And after that meal… it was game over. Over the next year, my weight crept back up. I couldn’t sustain the work I had done to lose all that weight, nor did I want to continue restricting the amount and kinds of food I could eat. This only confirmed that what I thought about dieting was correct: I needed to eat food that I didn’t really like, be hungry, and work out a lot to lose weight.

The next affair with weight loss came when a friend told me about this “paleo” thing. I set a goal that if I got down to 180 pounds, I could buy a pair of Vibram Five Finger shoes. I got to my goal weight over the course of a few months with lots of exercising mixed in. After I got my shoes, all progress was halted and all the weight crept back.

This became my pattern: Eat whatever I want, gain weight, get frustrated at weight gain, put a reward out there, cut calories, exercise a lot, lose weight, get reward, repeat. I went through this a lot, usually with cycles lasting a few weeks and 10 to 15 pounds at a time. I never found anything that stuck. Why could I not maintain? Why could I not continue? I assumed it was because I lacked willpower, but I was wrong. Crash dieting and exercising don’t work, but I didn’t know that. I believed that was the only way because it worked for me… temporarily. I didn’t want to do that for the rest of my life.

I got to a point in my life where I gave up. My wife and I had children now. We both had busy careers and life stress. Food and exercise were the least of my worries. I wrote off ever being fit again and tried to settle into this new life. At this point food was my drug. I loved craft beer and whiskey. I kept jellybeans with me all the time. I was really overweight, and my mental health was in decline. Yet, I didn’t want to give up what I was currently eating.

In the beginning of 2016, I got wind of this thing called the ketogenic diet. Give up carbs? I didn’t know if I could, but I knew something had to change; I was going downhill fast. So May 9, 2016, at lunch time I ate a salad and had a beer and decided the keto diet was what I was doing. I was committed from day one, believing it would work. And it did. I lost about 35 pounds in three months, with most of that coming off in the first month. I listened to audiobooks and podcasts and joined several Facebook groups dedicated to the ketogenic diet. I also co-created a keto Facebook group of my own with over 400 members; together we’ve lost a combined total of over 3000 pounds to date.

For almost a year now I’ve been maintaining easily. I eat foods that I enjoy and plenty of them. Now that I finally learned how the different macronutrients work in your body, maintenance is easy. I followed a strict limit of 20g of net carbs per day for almost a year and have since dialed back a little to around 40 to 50g of net carbs per day (though I’d venture to guess I’m still often around 25g). Throughout this journey I’ve done very minimal exercising for the purpose of losing weight. I exercise for fun now, as it should always be.

Ketosis and the ketogenic way of eating has been a life saver for me. My energy levels have stabilized, I can enjoy long runs and bike rides without having to worry much about fueling, inflammation is a thing of the past, mental clarity is astounding, and a plethora of other benefits. Whether you are trying to alleviate chronic conditions, autoimmune disease, or just looking to lose weight, I highly recommend learning the ways of KETO!