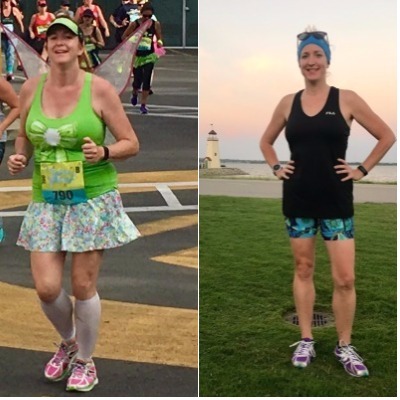 Despite being a sugar addict since birth, I was always an athletic and thin child. In 1972, baby formula was backed by science and breastfeeding no longer recommended. I was started on sugary junk food from day one, and my sweet tooth grew exponentially, but I had always been able to outrun my spoon.

At age 16, that changed. At a cheerleading competition in Texas, I blew out my left knee. Not one to ever give up, I had the first of many knee surgeries and rehabilitated my knee only to blow out my right knee during my senior year. Throughout college I stayed physically active, but the numbers on the scale slowly crept up. By medical school, the long and stressful hours, poor nutritional choices, and lack of consistent exercise had taken their toll, and the excess weight became noticeable to me. I was becoming “skinny-fat.” Although my weight was in the BMI range for “normal,” I had accumulated belly fat.

In medical school, our nutrition education was sparse and followed the traditional party line of “low fat, high carbohydrates” and calorie restriction to manage weight issues. I distinctly remember our nutrition professor stating that “obesity is a glandular problem, the salivary gland.” During residency, I was a serial dieter restricting calories and increasing activity via the “calories in/calories out” approach. Despite conscientiously watching every bite and exercising regularly, the weight would not budge.

In 2003, I became pregnant. I viewed my pregnancy as a license to loosen dietary restrictions, after all I was eating for two. I dreaded the glucose tolerance test as I suspected it would end my sweet tooth indulgences. As suspected, I was diagnosed with gestational diabetes and referred to a dietitian who provided such non-helpful advice like: “There was no such thing as a diabetic diet,” and “Eat a healthy diet with all things in moderation.” I was assured that my diabetes was temporary and would resolve after my pregnancy was completed. Despite following the nutritional advice completely and cutting out all sweets and refined carbohydrates, I ended up on insulin throughout my pregnancy.

With my second pregnancy in 2006, I was declared “high risk” and was diagnosed with diabetes at eight weeks of pregnancy. This time, it was not temporary but true Type II diabetes. After delivery, I decided there had to be a better way, and put myself on a “low glycemic diet.” The excess weight melted away. I was able to stop insulin, and I lost 30 pounds. I kept the weight off for two years and managed my diabetes with diet and exercise. I religiously walked 30 to 45 minutes every day but eventually became lax in my dietary choices and allowed sweets and carbs to creep back in. When I was started on Metformin in 2009 to deal with persistently elevated blood sugars, I felt utterly defeated and doomed to a life of being a diabetic.

In 2013, I found a new direction and my life has never been the same. I wanted a “Mickey Medal.” Determined to earn—not buy—my bling, this necessitated taking up running. Despite being told by every orthopedic surgeon who had operated on my knees—seven in total—that I really shouldn’t run, I would not be deterred. Having been told repeatedly that I would need a knee replacement by age 50, I figured that my knees were “shot” anyway, so why not start running?

Through RunDisney, I discovered Jeff Galloway and his “Run-Walk” method that enables people who would not naturally be able to run to do so. I began training and quickly realized the problems of being insulin resistant. I had to fuel with GU every two to three miles. Despite training three or four days every week, running 16 half marathons, and one full marathon, my weight continued to drift between “normal” and “overweight” per BMI. No matter what the scale told me, my blood sugars were not stable and I struggled with energy fluctuations. I had to eat a snack in the afternoons to avoid brain fog, lethargy, and brown-outs during my clinic hours.

At a CME (continuing medical education class) in March 2017, I had a moment of reckoning. The lecture was on dementia, specifically how limited pharmacologic interventions really are, and the need for prevention. The physician spoke of an epigenetic trial looking at lifestyle intervention to change the course of individuals with a known genetic risk for Alzheimer’s. In addition to exercise, there was an emphasis on diet and controlling blood sugar. As I sat there in that lecture room, I realized that I was not okay with a future of dementia, cardiac disease, peripheral neuropathy, and blindness. I had already lost a grandfather to Alzheimer’s disease, and my father had suffered a significant stroke secondary to diabetes due to failure to change what he could. While we can not help the genes we are born with, we are certainly in control of the choices we make as to sleep, connections, activities, and most importantly, diet. We do not have to accept that diabetes is a progressively worsening condition with no cure.

I researched the Mediterranean diet mentioned in the lecture and came across information on the ketogenic diet and other LCHF diets. I began reading books by Noakes, Sisson, Phinney & Volek and realized there was another reality possible for me. While these changes would not be easy, I have been blessed to be supported every step of the way by my husband and running partner, Michael. We researched recipes, changed out our pantry, and had a “farewell to carbs” weekend as we ran the Tinkerbell Half Marathon at Disneyland over Mother’s Day. This was a special race for me as my oldest son ran with us. Michael ran ahead and took pictures of my son and me. When I saw the images, I was horrified. While I knew that my weight was not where I wanted it to be; the pictures were a harsh confirmation of that reality. I refused to post any of the running pics from that weekend until now.

On May 16, 2017, we began our journey into the ketogenic way of eating. My beginning weight was 171.6 pounds, BMI 26.3, and my abdomen 35.5 inches. As we train for the 2018 Walt Disney World Marathon, we are concerned about preserving muscle and have made sure to include moderate amounts of high-quality protein and lots of fresh vegetables. I have been amazed at the improvement in my energy levels. My blood sugar has stabilized, diabetes reversed, and I have stopped Metformin. I no longer require a snack in the afternoon, and we just ran nine miles fasted without any fuel.

After 13 weeks on a ketogenic diet, I have lost 22 pounds and 4.5 inches from my waist. Moreover, my levels of inflammation have dramatically improved and I rarely take NSAIDs. These changes have been so profound that I now spend more time with all my patients discussing their nutrition and the effect it has on their health and wellbeing. Hard to believe, all those years restricting calories while feeling so hungry and tired, that the answer to better health, stable blood sugar and energy, and a healthy weight was fat and not grains!