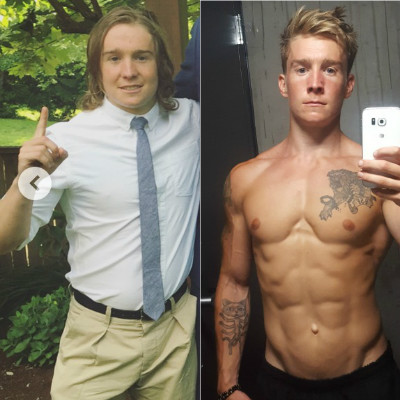 Brian first went Primal after a year of vegetarian eating, chronic cardio, and a parasitic infection had whittled away his body. “My now wife, then girlfriend, referred to me as a ‘starving chicken.’ She is from Sierra Leone, and the chickens there are twiggy little things and not the plump-breasted behemoths we have over here.” He embraced meat and became heavily involved in a local CrossFit gym. A year later, he was almost unrecognizable—in a good way.

“Getting bigger and stronger was extremely satisfying, and I found that there was a direct correlation between how much food I ate and how much I could lift,” he recalls. “But eventually I got to a point where I had to reassess my goals.” He became strong, but he started gaining weight (and a “fatty face” according to his wife) and was feeling heavy during exercise. With the goal of becoming leaner while maintaining strength, Brian turned to keto.

Having dabbled with keto periodically before, he had already experienced some of the benefits, like greater satiety and the ability to skip meals without becoming hangry. This time around, though, there were some initial bumps in the road when adopting a sustained keto approach. Trying to pair keto eating with CrossFit, he found that he was insatiably hungry and not able to deliver the performance he wanted during his WODs. Rather than throw in the towel, he adjusted his training to focus on low rep, heavy powerlifting and slow MAF-style cardio on non-lifting days. That combination did the trick. Brian’s appetite, energy levels, and sleep all normalized, and he met his body composition goals.

A year later, Brian is still enjoying keto. He reports that although he initially noticed decreases in strength until he got it dialed in, he is now as strong as ever in the big three powerlifts (squat, bench, deadlift). He is also 15 pounds lighter than at his peak, so his Wilks score has improved, and his body fat now hovers around 9 percent instead of 15 percent. “And with the ketogenic route I get the added bonus mental/cognitive and lifestyle benefits outside the gym,” he asserts. “For me, these lifestyle benefits and potential health/longevity benefits down the road are well worth eating this way.”