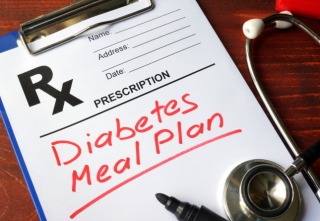 If you think of Type 2 diabetes as carbohydrate intolerance, the natural dietary response should be to restrict the offending dietary component. And when this occurs—when diabetic patients restrict carbs—their symptoms improve, often to a greater degree than diabetic patients on other diets. Keto restricts more carbs than even other low-carb diets, so on the face of things, keto seems great for diabetes.

Insulin resistance: Your cells don’t respond as strongly to insulin, and you need more to produce the desired effect.

Hyperinsulinemia: Your insulin levels are always elevated. This inhibits you from releasing fatty acids from your body fat to be burned for energy.

Hyperglycemia: Because you’re not very good at using insulin to remove glucose from the blood, you often have high blood sugar—especially after eating. In fact, postprandial blood glucose is the most common way to diagnose type 2 diabetes.

How Does Keto Affect Those Symptoms?

Insulin resistance: It depends. Keto can actually induce physiological insulin resistance, whereby the tissues become resistant to insulin so that the small amount of glucose you have in your blood is diverted to the areas of the brain that can’t use ketones. This is normal, not pathological, and doesn’t lead to hyperinsulinemia. If you’re losing weight on keto, your insulin sensitivity will improve.

Hyperinsulinemia: Keto lowers insulin levels. For ketosis to even occur, insulin must be low.

What Studies Tell Us

In 2005, researchers gathered 28 overweight patients with type 2 diabetes and placed them on a ketogenic diet with fewer than 20 g of carbs per day. Seven patients dropped out; 21 completed the 16 week study. Those who completed it had great results:

This was a pilot study without a control group, so it can’t be cited to directly compare keto to other diets. But it clearly worked.

Study #2: Low-Glycemic vs. Keto (Patients Who Were Obese and Had Type 2 Diabetes)

In another study, researchers directly compared keto to low-glycemic/carb. They took 84 obese patients with type 2 diabetes, randomly assigned them to either a ketogenic diet or a low-glycemic diet, and tracked their progress over 24 months. What happened?

Both groups improved, but the keto group made bigger improvements, especially in HbA1c. Low-carb is good, keto might be better.

Study #3: Low-Calorie vs. Keto (Patients Who Were Obese)

Another study compared keto to low-calorie in obese patients, about a third of whom had diabetes. This time, the patients got to choose the diet that most appealed to them. So, it wasn’t random, but it was closer to how diets work in the real world.

Both groups improved markers of glucose control and metabolic health, but the keto group saw greater improvements on every single marker measured:

The drop in blood glucose in the keto dieters was intense enough that the researchers recommended anyone interested in trying it retain medical supervision.

In addition, only among the keto group were patients able to discontinue medications.

In 2016, researchers ran a four month study comparing the effects of two diets in patients with type 2 diabetes. The first diet was your standard hypocaloric approach. The second was a very low carb ketogenic diet.

The keto group lost more body weight, more inches off their waist, and gained better control over their blood sugar. There were no adverse effects; kidney function remained stable throughout the study. Most importantly, the keto group had no trouble staying on the diet.

Maybe you’re not convinced. Maybe you’re leaning toward meeting with the dietitian your doctor has recommended. That’s fine. Many medical professionals are waking up to the potential of the ketogenic diet, so you might actually hear similar advice. Just be aware of what else you might hear.

Let’s compare keto to how a Certified Diabetic Educator would feed the “average-sized” diabetic “trying to lose weight.”

At three meals and two snacks a day, you’re looking at as many as 240 grams of carbohydrates for a person with diabetes who needs to lose some weight. If you follow the authority-sanctioned “expert.”

I read that and I’m completely blown away. It’s really that bad? That’s what your average type 2 diabetic who shows up at the doctor’s office with no clue about nutrition ends up eating? It’s probably even worse than that, because 60 grams of carbs easily turns into 70.

Perhaps that educator goes on to admit that keto is great for weight loss, has been shown to improve diabetic markers, and could even help prevent diabetes if you could “keep the weight off.” But it’s too hard, too restrictive for most people to follow, she’ll likely suggest.

She claims that the stress of watching how many carbs you eat will be “far more detrimental to your health” than going keto will be beneficial. I don’t actually disagree with that completely. If going keto is so stressful that your every waking moment is consumed by thoughts of carbs, and you can’t stick with the diet no matter how hard you try, maybe it’s not for you. That’s okay. I’ve never said everyone has to go keto, or even that everyone can go keto. Nor have I said that once you go keto, you can’t go back or rotate higher carb days into the routine.

Mostly. Any medical patient should check with their doctor before changing their diet. You may have to adjust your medications (or remove them entirely). And keeping your doctor involved and apprised of your progress could legitimize the diet—if it works. Your doctor may even start recommending the diet to other patients.

Oh, and make sure you’re eating eggs, liver, or taking extra choline. Inadequate choline in the context of a high-fat diet can lead to hepatic fat accumulation, and a fatty liver increases insulin resistance and predicts the development of type 2 diabetes.

To sum up, going keto can be an effective dietary strategy for type 2 diabetes. All the available evidence suggests to me that, as a general guideline, it’s both safe and effective.

What about you? Anyone with type 2 diabetes try going keto? What were your results? And how has it influenced your work with your physician?