Dear Mark: Kerrygold and GMOs, Primal Jainism, and Saffron as a Supplement 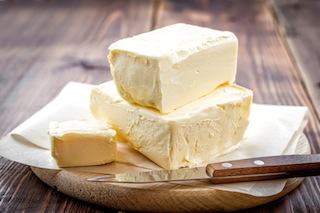 For today’s edition of Dear Mark, I’m answering three questions. First, the matter of Kerrygold butter. It’s the go-to option for Primal butter eaters, but it’s also neither organic nor GMO feed-free. Is this a problem and should I withdraw my recommendation? Next, can a person who eats no meat, no eggs, no seafood, no tubers, and a limited selection of fruits and vegetables go Primal? Probably not, but that’s not the end of the world. And finally, what’s the deal with using saffron as a supplement? It appears to be effective at reducing appetite, but what else does it do?

I saw Kerrygold as one of your recommended butters. It is not organic & it’s made from cows that do receive some GMO grain.

People need to stop chasing dietary perfection. So Kerrygold cows may get a maximum of 3% of their food from GM soy and/or corn? Is that really a problem?

90% of their diet comes from Irish grass. Those Irish Spring soap commercials from the 90s with ridiculously green grass? Cows are gorging themselves on that stuff. For 312 days out of the year, they’re eating wild cow salad and living the dream. And when they’re not, when fresh grass isn’t available, they’re still getting the vast majority of their calories from dried and fermented grass harvested the previous season.

Obviously, the tiny amount of grain in their feed worries you. We talk a lot about grass-fed. Studies on pastured (not 100% grass-fed and finished) dairy products confirm that “merely” pastured is plenty good enough. Just recently, a study placed rodents on one of two diets: a diet high in pastured cream or a diet high in conventional cream. Animals on the high-pastured cream diet had lower body fat, better blood lipids, lower inflammation in body fat tissue, and less liver fat despite eating more calories overall. Furthermore, the pastured cream reduced intestinal permeability.

How about the GMO grain in the cow diet? I view GMO foods with caution, but not terror. While I’d rather not eat them if I can help it (and simply going Primal eliminates most of them), I’m not worried about eating a food produced by an animal that might have eaten a small portion of GMO soybeans. Again, GMO grains make up 3% of their diet at the most. In the studies by Seralini showing health issues in GMO-fed rodents, those rats were eating 11% of their calories as GMO corn. And the probable cause of the health problems wasn’t the genetic modification, it was the Roundup herbicide GMO corn marinates in. Kerrygold butter doesn’t have Roundup residue. Heck, not even grain-fed butter from the land of GMO corn – the United States – shows evidence of Roundup residue. You’re safe here.

What about the organic issue?

Kerrygold dairies may not be organic in name, but they don’t use pesticides, they rely on natural rain-fed irrigation, and their soil is low in fat-soluble pollutants like dioxins (PDF). And besides, grass-fed trumps organic when it comes to animal foods like butter, or beef, or lamb. If you don’t trust me, see for yourself:

Go to your local grocer that carries Kerrygold. Walk to the dairy section. Wrap your hand around a bar of Kerrygold. Give it a gentle squeeze. See how it gives? See how you leave an indentation? That’s because those cows have been eating so much green grass that their butterfat has been imbued with omega-3 fats and conjugated linoleic acid, which are unsaturated and thus softer at refrigerated temperatures.

Now unwrap it. Yes, right there in the store. You’ll be buying it in a minute anyway. See how yellow it is? That’s beta-carotene from – again – all the green grass those cows are eating.

Now give it a little taste. Get some of that sweet Kerrygold on your tongue. Savor its descent back into cream.

Now do the same for the random organic butter (pictured right). Give it a squeeze. You can’t; it’s rock hard. Give it a look; it’s white with maybe a tinge of pale yellow. Now give it a nibble; it melts into grease, not creamy velvet. When it comes to butter, the organic part doesn’t matter nearly as much as the grass-fed part.

If you can get fully grass-fed and finished organic local raw cultured butter, do it. If you can get it without spending $12 a pound, go for it. But don’t let the perfect become the enemy of the good. And in this case, your idea of perfect isn’t really even perfect.

Sorry If I’m being too blunt, Barbara. I just don’t want you to miss out on a great source of fat and micronutrients, spend more money than you need, and waste time and energy looking for that perfect butter that probably isn’t even out there.

I have a friend and co-worker that wants to try going Primal, but he practices Jainism, which has some strict dietary rules. For example, he can’t eat meat, eggs, or anything that grows underground — essentially lacto-vegetarianism. But, he also thinks he has inflammation issues from dairy. Do you have any suggestions for him on how to possibly go Primal?

That’s going to be tough. The dietary restrictions of Jainism are quite strict, revolving around the complete and utter reverence for all life. They make an exception for certain plants, since humans have to eat something and plants are the least “conscious” or aware of being eaten.

Many fruits and vegetables are off limits because the risk of collateral insect death is too great.

Figs are not eaten to avoid killing the fig wasp, an insect that spends its larval stage inside the fig fruit.

Multi-seeded fruits may house worms and so are forbidden.

Tiny flies can get stuck to the nooks and crannies lining the surface of broccoli and cauliflower. Washing usually doesn’t remove them, so to be safe these vegetables are simply avoided.

Dairy is allowed, but with caveats. Calves get first dibs on the milk. Once a cow is milked, taking care to let the calf get the first 1/3 of the milk, it must be boiled three times and consumed within 24 hours. Yogurt is made fresh daily, and never using the previous day’s batch as a starter. Cheese isn’t allowed. All food in general is to made at home.

It’s really a ton of work.

The only way, really, would be with lots of dairy. If cow dairy is inflammatory for your friend, he can try goat dairy. Lots of people seem to fare better with goat milk than cow milk, and several studies support these anecdotes:

But there’s still the question of obtaining sufficient calories. As you say, eggs, meat, seafood are all off the table. So are root vegetables of all kinds – garlic, onions, potatoes, sweet potatoes. That takes care of most dense calorie sources. If he’s Primal, he’s not supposed to eat grains or legumes, which is where most Jains get the bulk of their calories. I’d make some allowances here. Rice is okay, as I’ve said before. Lentils are among the least problematic legumes and require relatively less prep work (you don’t necessarily have to soak lentils, for example) – and the most nutritious. He can eat dosas, a kind of fermented lentil and rice pancake; the fermentation makes them more nutritious and digestible. Here’s a basic recipe. If he’s not interested in making his own, Indian markets often carry fermented dosa batter in the refrigerator section.

Is he going to be strict Primal and Jain? No. But he can definitely glean a few helpful principles from the Primal way of eating.

Long time reader and fan here. I just recently read reviews about a saffron extract product that will help suppress appetite to help you lose weight. Can you comment on this? Is it safe/normal to use as an aid? I’ve struggled with losing weight for awhile and I would love to try this out.

Like any spice I’ve ever taken the time to study, saffron has pharmacological effects.

There is one study in overweight, healthy women showing that a saffron extract can normalize appetite and reduce snacking. Women in the saffron extract group also lost more weight. This is the supplement used. Reviews aren’t great, but go for it if you’re still interested.

The biggest effects seem to be on subjects with mild to moderate depression. In these folks, saffron is an effective anti-depressant, even in placebo-controlled trials. Saffron can also ameliorate the SSRI-induced sexual dysfunction in both men (and male rats, at least) and women taking pharmaceuticals for depression.

Saffron is safe, but there are some potential issues to watch out for. High doses can cause nausea, which, I suppose, might in a roundabout way reduce appetite (but not healthily). Bleeding, white blood cell count abnormalities, and low blood pressure are also issues at higher, chronic doses. Keep it short and acute if you try it.

There are even reports of saffron having psychoactive effects, and saffron was an integral ingredient in the old timey opium tincture known as laudanum. That’s whole spice saffron, though, not an extract. If you’ve ever watched the HBO show Deadwood (you should, by the way; great show), some of the characters use laudanum.

That’s it for today, folks. Thanks for reading!