It’s Not About the Number, It’s About Feeling Good

As you know only too well, I’ve been meaning to write this story for the longest time but never got around to doing it, but I finally have so here goes!

I have included two sets of pictures. The first two (below) are from before I started my fitness journey and I had not yet discovered Primal. These pictures were taken in January of 2013 when I weighed in at 195 lbs. Previously I was 225 lbs after my pregnancy and in a slump for the longest time but did not have the courage to take pictures at that size. I did start on the unhealthy track of HCG therapy and while this might not have been the best nutritional decision of my life it did in fact serve one purpose. It lit the fire! The weight was pouring off but at 195 lbs it all stopped working. This was when I made the decision to join the gym. 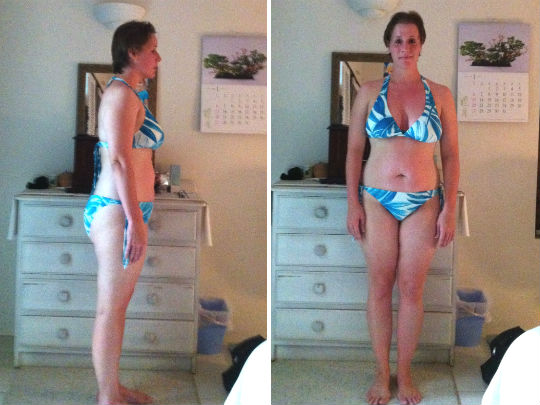 When I signed up for the gym, I also signed up on myfitnesspal.com to track my food. I discovered very quickly what I was doing wrong in terms of portion sizes, sugars and carbs. This made me change those aspects of my diet, which was a drastic improvement over previous years. It took a few months, but the changes that were taking place in (and out) of my body, were very clear. Not only was the weight coming off, but my skin started to clear, my left knee which I had surgery on at the age of 15 was no longer hurting, I didn’t need to wear my knee brace any more during workouts, I was becoming happier and my mood swings were disappearing, and finally, I was gaining some self confidence. Since I was a small child, my self confidence and general self love were pretty much non-existent. I always had a few extra pounds that I was walking around with, but I certainly wouldn’t say I was fat. However, I was always taller than everyone else and had a much larger frame. My adult height is 5’10”.

About six months after I started the gym, I stalled at 165 lbs. Then I discovered your wonderful site and dove head first into a primal lifestyle, which is what helped the remainder of the weight to come off. Within a year I had surpassed my goal weight of 155 lbs and actually made it down to 144 lbs. Looking back at those pictures now, I can see the weight loss, but also the frail and bad postured body I had punished for so long.

After the initial weight loss, I decided it was time to start a lifting program to work on building up some muscle tone. I found the Strong Lifts 5×5 program and started slowly with that. My body worked its way up to 155 lbs and eventually back to 165 lbs where it stayed for awhile. Up until the end of 2014, I was still around the 165 lbs mark but decided to switch up my workout program again to get a bit more definition on what I had already built.

I’ve been doing CrossFit now for just over six weeks (pictures below) and I’m enjoying the challenges it’s bringing me. My gym classes in the past two years had not really changed much, so throwing in CrossFit has been just what I was looking for. These days I’m around the 170 lb mark and thinking it’s not so bad to be here. Initially I was very worried about gaining any more weight, and truthfully I don’t want to gain any more, but I do realize it’s not the number, it’s about how my body works for me and how I feel in it. 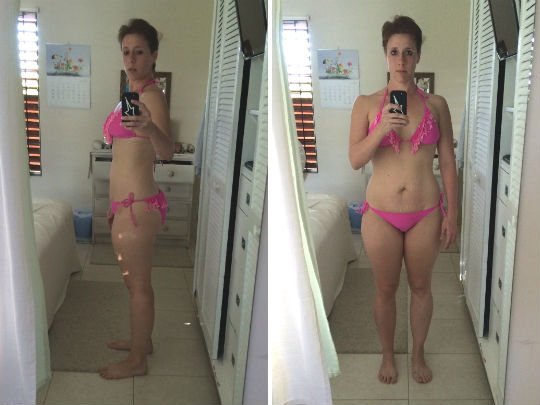 What this site has done for me is immeasurable in most ways. I’ve gained so much self confidence that for the first time in 11 years, I’ve been able to walk down my beautiful Barbados beaches in a bikini. I’ve been able to buy shorts and not worry about what others will think about “the fat chick in those shorts.” I’ve been able to go out with friends and take pictures without having to worry about if I look good or not. Mirrors are okay now and I don’t find myself avoiding them at all costs.

I’m still working on a few demons, but they are slowing being kicked out one by one. My husband and daughter have been immensely supportive, as has the rest of my family. I’ve still yet to convince anyone else to go all out Primal, but I have been able to encourage better food choices in most of those around me. The truth is that this journey never ends and I’ll continue to learn more from your site everyday. Thank you for your dedication and your wisdom. All of your hard work certainly has not been in vain.