Is Snoring Really a Health Problem? 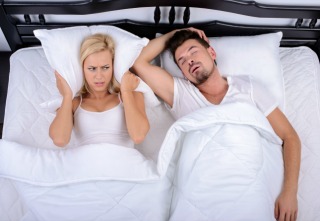 There’s a saying that people who snore always fall asleep first. My days of overnight sports chaperoning and group camping trips have frequently confirmed that notion. Most people would say that snoring is less a problem for the snorer than anyone lying awake in the vicinity, and on those specific nights in memory I probably thought as much. But the health researcher in me knows there’s more to the story.

We know sleep apnea is a big deal. No one wants that. But regular, run-of-the-mill snoring? Is it really an issue? Everyone has someone in their family who does it. It’s often a running joke, in fact. Some estimates suggest more than half of us snore (although that might be an exaggeration, given that the estimated range is so extensive). How concerned should we really be? And what is there to do about it anyway?

What exactly is snoring?

Snoring is simply a case of air moving over the relaxed tissues of the throat, causing those tissues to vibrate during sleeping. That vibration creates the sound.

The causes of snoring vary but include swollen nasal tissues due to allergies, upper respiratory infections, or a misaligned nasal passage. Certain meds also contribute (especially those that cause drowsiness), as does knocking back a few too many drinks.

Sleep apnea, however, takes snoring to a whole new level, with a physical closing of the airway along with the usual snoring. If you’ve ever been witness to sleep apnea, you’ll probably agree it’s a little alarming. The closing of the airway means a person literally stops breathing for what seems like an eon, until he/she wakes momentarily, sucks in a noisy gulp of air, and then resumes snoring. It may happen every 2 minutes, or it may only happen a couple of times per night. Either way, it’s a classic case of obstructive sleep apnea.

The most common cause of actual obstructive sleep apnea is excess weight and obesity. The tissues of the throat and tongue literally get fat, meaning that air has a hard time passing through when they relax during sleep. Sleep apnea might also be caused by engorged tonsils or a hefty overbite.

The thing is, the majority of all these causes shouldn’t really be much of an issue for the avid Primal enthusiast. Or…?

Snoring is more than a nuisance.

Let’s push sleep apnea to the side for a minute. No one would argue that sleep apnea is just a mild inconvenience. The medical establishment already treats it as a serious condition.

The same can’t be said for snoring. Very few people seek help for their snoring, regardless of how vehemently their partner complains every morning. Sure, snoring can be a symptom of sleep apnea, but most people who snore don’t actually suffer from apnea itself. Does that mean they’re in the clear? Unfortunately, no.

Research shows that snoring can exact a serious physical toll, even when it’s not classified as sleep apnea. A 2014 study found that snorers had a greater risk of developing a thickened carotid artery. This is a thickening in the lining of the two primary blood vessels that supply the brain with oxygenated blood—in other words, a big deal for cardiovascular health risks like heart attack and stroke. The increased risk from snoring was even greater than that for smokers or those who were overweight.

Even more alarming is the effect it has on children. In one study, children who suffered from primary snoring experienced more issues with attention, social skills, anxiety and depression. Overall cognitive ability and certain language and visuospatial functions were lower in children who snored compared to those who didn’t.

Sleep apnea, on the other hand, ups the ante considerably. Research shows it’s strongly associated with metabolic syndrome, cardiovascular disease, hypertension, cancer, and diabetes. Because excess weight is the primary cause, for many people it becomes part of a self-perpetuating cycle. Strangely enough, it seems that women are perhaps even more seriously affected by snoring and sleep apnea than men, at least when it comes to greater risk of heart failure and diabetes.

What are the options?

If you’ve ever asked your doctor for treatment ideas, you’ve likely heard a few of the following:

You’ll notice that I listed those recommendations from least alarming to most alarming. Ideally, you shouldn’t need to employ any of those conventional “band-aid” methods, and you especially shouldn’t need to go slicing out bits of your throat. Unless you have true obstructive sleep apnea, you probably don’t want to rely (at least long-term) on a CPAP either, which can sound eerily like Darth Vader.

Other CW dictates avoidance of alcohol and sedatives, sleeping on your side, and staying well away from smoking. These are all good recommendations that essentially speak for themselves.

Next, what lifestyle changes can do…

A 2012 study showed snoring and sleep apnea improvements during REM sleep in those who made the shift from a “prudent diet” (a.k.a. one rich in “whole grains” and, presumably, low in fats) to a Mediterranean diet. I’ve spoken before about how I give a half-hearted thumbs up the the Med diet because, in many ways, it strikingly emulates the Primal diet—plenty of healthy fats, lots of veggies, less junk.

However, researchers also increased the physical activity of both groups, so it’s fair to say that a Mediterranean diet combined with more exercise was responsible for the improvements. But then again, was it the weight loss that improved the snoring, the increase in nutrient-dense and anti-inflammatory foods, or the exercise? It’s hard to say which was the catalyst (or if all of them together played a part).

That leads us to exercise as a form of snoring treatment.

A small 2014 study examined the effect of an “individualized exercise training program” on 22 patients with severe to moderate obstructive sleep apnea syndrome. Over the course of the month, those who undertook the exercise program experienced significant improvements in their sleep apnea compared to the control group, who just got “education activity sessions” (whatever that means). They also showed reductions in weight, fasting glucose, and blood pressure.

Once again, it’s a bit of a chicken or the egg scenario. Were the sleep apnea improvements due specifically to the personalized exercise program, the weight loss that resulted from this, or the participants simply being more “zonked out” when they hit the hay each night? Once again, maybe a combination of all 3 or maybe not.

What is clear, however, is that not all exercise is good exercise when it comes to treating your snoring problem. Grok was all about regular exercise, but he also knew when enough was enough—over-exerting the body by working out too long or too hard means exposing your body to excess stress. More stress means more inflammation, and we’ve already established that one of the root causes of snoring is inflammation of the upper respiratory system.

A friend of mine recently invested in a humidifier as he was concerned about excessively dry air in his apartment during the winter months. He began switching the unit on every night and letting it run until the morning, and found an interesting correlation. His partner’s snoring intensity and frequency dropped with increasing humidity, implying that excessively dry air may also play a role in snoring. It’s just one person’s story, but worth looking into if you’re already eating well, moving frequently and managing your weight.

But then there’s a wholly different kind of exercise for those with simple snoring issues—specifically exercise involving the mouth and tongue. In one small study, a regular practice of certain oropharyngeal exercises over three months time resulted in significant improvements for both snore frequency and snore “power” (there’s a concept).

Weight loss can be an effective tool for mitigating the effects of snoring, but as we’ve seen it may be difficult to achieve weight loss without first improving sleep. And how do you improve sleep without solving your weight issue?

If you’re a healthy weight, you might still suffer. It’s at this point you should look to your diet. Are you getting enough anti-inflammatory foods? Have you considered adding anti-inflammatory herbs and spices? Are you sure there aren’t any unaddressed allergies?

If you’re full Primal, you’re probably already investing in these choices, but it doesn’t hurt to do a little investigation. If necessary, get your partner to jot a few observations every morning regarding the night before. Maybe a rating system, with 10 being “I didn’t realize we lived on a fault line” and 1 being “ah, all’s quiet for once.” See if there’s a pattern with anything you did (or didn’t do) the day before.

Start experimenting with your diet and exercise routine, maybe throw in some pre-bed meditation, condition yourself to only sleep on your side, and try a humidifier to loosen mucus. Talk to your doctor about any medications you’re taking and if they might be contributing to the issue. Experiment with different pillows (there are so-called “anti-snore” options that tilt the head back slightly to keep the airway more open). Try the oropharyngeal exercises. Maybe try the nose strips. Take notes, recognize linkages between snoring reduction and certain lifestyle or dietary changes, and you may just become the next authority on snoring solutions.

Thanks for reading, everyone. Have I missed any Primal-friendly snoring treatments? Share your experiences and solutions. Take care.