Is Gluten Sensitivity All in Your Head? 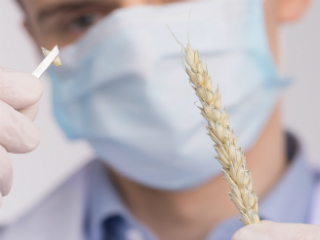 First, non-celiac wheat/gluten sensitivity was a sham and everyone claimed its participants were in a collective mass delusion. Then some actual studies came out, and it appeared to be a real condition. Soon after, researchers offered different theories. Maybe it was FODMAP intolerance. Maybe it was all that wheat fiber messing up the gut. Maybe it was too little fiber and other fermentable substrate, and we were actually starving our gut bugs and compromising our intestinal health. Maybe it wasn’t even the gluten. And maybe it was actually some kind of a placebo. One of the most recent findings was that gluten sensitivity might not even exist. What’s the truth?

The response to the controversy in the media has been predictable. Gluten-free was just a fad and we were “dumb” for following it. Paleo and gluten-free are just “lies we tell ourselves,” and they’re literally destroying us. The one upside is this hilarious viral video, but that doesn’t make up for scaring away the people who might really have benefited from avoiding gluten/grains. Or the people who had already benefited but began doubting themselves and reneging on the diet. I don’t have any hard data on the numbers, but I’ve received enough feedback from confused readers wondering whether the real, measurable benefits they’d experienced were all in their heads.

How was the study conducted?

Researchers recruited a group of 160 adults. 80 of them were non-celiac wheat sensitives eating a normal diet. 40 had celiac. 40 were healthy controls. They ran a few tests to determine their baseline inflammatory status. Here’s what they found:

NCWS displayed more immune reactivity to gluten than healthy controls, but less than celiacs. This increased reactivity on the part of NCWS was not mediated by the genes typically associated with celiac.

NCWS had elevated biomarkers indicating damage to the intestinal lining. That’s leaky gut, the condition that “rational” types still insist exists only in your imagination.

NCWS had higher lipopolysaccharide-binding protein (LBP) and sCD14 levels than both controls and celiacs. Lipopolysaccharide (LPS) is a bacterial endotoxin with some bad health effects if allowed systemic access. Our bodies dispatch LBP and sCD14 to regulate LPS toxicity, prevent systemic dispersal, and maintain a healthy inflammatory response. High levels of LBP and sCD14 indicate elevated systemic inflammation. NCWS also had elevated bacterial endotxin (LPS) antibodies. This suggests that LPS was making it into circulation—perhaps through a compromised intestinal lining—and eliciting an inflammatory response.

After the baseline measurements, researchers placed 20 of the NCWS subjects on a gluten-free diet for 6 months to determine the effect of gluten avoidance on these biomarkers. Wheat, rye, and barley were all restricted. What happened?

Removing gluten-containing grains improved both intestinal permeability and systemic inflammation. LBP, sCD14, flagellin antibodies, endotoxin antibodies, and leaky gut markers all improved. They showed less reactivity to microbial products leaking through the gut. Their symptoms, which had previously included both intestinal (diarrhea, gas, bloating, pain) and extraintestinal (confusion, fatigue, cognitive decline) complaints, diminished. All in all, removing gluten grains had real benefits that were reflected in both subjective and objective measurements.

It’s a pretty cool study that vindicates much of what you guys have been reporting (and experiencing) for years.

However, it doesn’t identify the source of the problem in these patients. They still don’t know what causes the initial breakdown in intestinal integrity.

I might, though. And I think there are ways to fix it.

I won’t go through every one of the recommendations for preventing and healing leaky gut. You can (and should) read the latter half of this post all about leaky gut where I lay out most of the possible causes and solutions for the condition. Nothing will be too surprising. You’re probably doing most of them. But do read it. It’s a solid piece full of research-backed advice.

For what it’s worth, I’ll discuss my evolving relationship with gluten. I don’t eat it often, but I’ll have the odd piece of crusty bread dipped in olive oil or smeared with butter when I’m at a particularly good restaurant. I’ll use regular soy sauce if it’s around. I’ll have a good beer (hey, it’s a traditionally-prepared grain!) a few times a year. I’ll nibble on a piece of quality cake or pie at a birthday party. Those little bits and bites used to give me grief, but not anymore. I’ve noticed a huge improvement in my reaction to gluten, and I think several things have made the biggest difference.

My training: For over a decade I’ve implored folks to make their long workouts longer and easier and their short workouts shorter and more intense. But since working on Primal Endurance, I’ve really embraced it in a way I now realize I wasn’t. Even four, five years ago my old competitive type A elite endurance athlete self was poking through, prodding me to “do another set, Sisson” and “c’mon, you got another hill/game/circuit/sprint in you.” I’m doing way more long slow movement (hikes, walking, paddling) and I’ve made my hard workouts briefer and more intense than ever. I’m avoiding the protracted intense training that induces leaky gut and favoring the easy stuff that improves it. This has likely improved my gut barrier function.

More collagen: I’m making a concerted effort to eat way more collagen through bone broth, my chocolate bars, gelatinous cuts of meat like oxtails and shanks, and even the occasional shake of powdered gelatin to thicken a pan sauce (seriously, folks: add powdered gelatin to coconut curry sauce and be rewarded). Collagen is great for the gut.

Less (and better) wine: Back when I did my no-drinking self-experiment, I found that both my sleep and my gut health improved. Drinking natural, dry-farmed wine lower in alcohol and free of adulterants has preserved those effects while allowing me to imbibe.

More fermentable fiber: Several years ago I began feeding my gut bacteria more regularly with fermentable substrates like inulin and resistant starch. Green bananas for smoothies, unmodified potato starch, dark chocolate, and all the fibrous vegetation I can get have made those gluten dalliances more tolerable.

Now, whether my recommendations will work for you remains to be seen. I’m optimistic, though.

That’s about it, folks. Thanks for reading and be sure to leave your comments, experiences, advice, criticisms, and anything else down below!