So, a little bit about my background: I am a 44-year-old former Marine, who worked as a police officer in Buffalo, NY for about twelve years. During that time, I obtained my B.S. in Criminal Justice, and then my law degree, all while working full-time. I entered the practice of law in 2005, and I’m still plugging away.

I initially became interested in weight lifting/body building when I was a Marine and police officer, but that all took a back seat during law school, due to working full-time. I was in the worst shape of my life during this period, and really didn’t get back into gear until about 2009, when I started running.

In 2010, I did my first half marathon, and then in 2013 my first full marathon. I entered the world of triathlon in 2014, and I’ve never looked back. I often tell people, that if running were equated to cocaine, then triathlon would be crack! Sorry, police humor, I guess! I did my first half-iron in 2014, full distance IMs in Muskoka (2015) and Boulder (2016); with many half irons, olympic and sprint distance races scattered throughout. 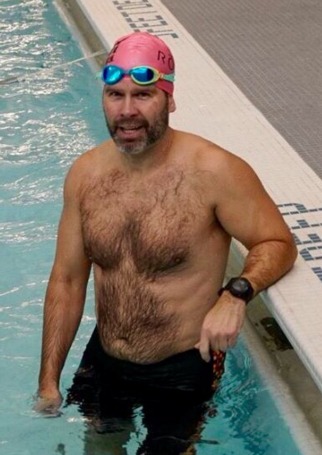 I found MDA/PB through Primal Endurance; which I picked up as an audiobook last September for a business trip. I originally grabbed it because I’m always interested in new training methods and techniques. Little did I know, it would change my life in such profound ways. At first, the diet stuff sounded far-fetched; eat lots of fat to get skinny—right!!! However, the more I listened, the more it made sense. I am a big believer in evolutionary adaptations as it relates to biological attributes (i.e. “Born to Run”—our evolution as hunter gatherers). So, the idea that the diets of our ancient ancestors certainly did not contain the crap found in the vast majority of the SAD diet today makes complete sense.

The other thing that really caught my attention was the Primal Endurance declaration: “Why do so many endurance athletes have excess body fat?!” Yes—why??!! I trained my tail off between 2015 and 2016 for back-to-back Ironman races, and yet raced both events at 167lbs (off season I was usually about 175lbs). By the way, 167lbs was the lowest I had ever been since before I graduated from high school; and before Primal Endurance. When I finished the book, I made a promise to commit to the PB/PE diet and training right after Thanksgiving weekend (for obvious reasons). 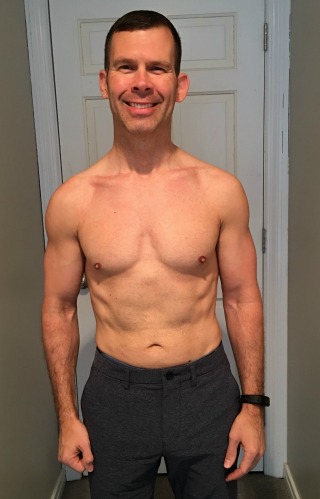 Fast forward to the present. I am a 150lb lean and mean endurance machine. I’ve already set a new bike PR twice at the half-iron distance, and have my eyes on a new half marathon PR and half iron total PR this fall. I broke a toe a few weeks ago, so I haven’t been able to really see the results of my training in the run. I can say my overall pace per mile at heart rate has dropped significantly since last fall, so I am optimistic.

Most importantly though, is that I feel amazing; both mentally and physically. I feel light on my feet, and mentally sharp (kind of important in my line of work!), and I don’t have those old post-lunch sugar crashes, where I want to crawl under my desk and take a nap. I owe it all to Primal Blueprint and Primal Endurance! I’ve attached two pictures as demonstrative evidence; the first is from last December (about 178lbs), and the second was taken back in May (about 152lbs). Wow!

Mark, thank you so much for this gift of lifestyle and fitness. I have spread the word through my triathlon club, and “converted” a few people already.

For anyone reading this that may be on the fence: Take that first step and change your life! It may not be easy, but you have everything to lose (weight & poor health), and everything to gain (good health & endurance)! Isn’t that worth it? 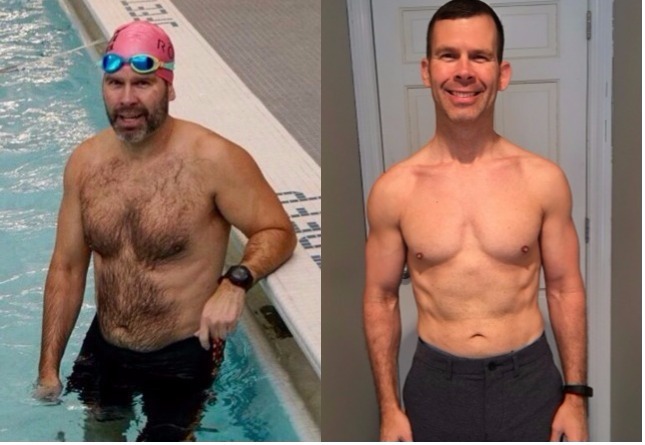