I Have Never Felt Healthier and Happier in My Life

I’ll start off with the disclaimer that my story is only in its early chapters, but it has already been life changing nonetheless.

In November of 2015, at the age of 23, after many years of excruciating pelvic pain, fatigue, chronic inflammation, and GI issues, I underwent an exploratory surgery and was diagnosed with a chronic illness called Endometriosis. Once a face was finally put to the culprit behind the past 8 years of my suffering, I decided that I would no longer let it control my life.

In January of this year, after discovering (through hours of research) and reading The Primal Blueprint, I knew it was time to honor my body in every way I could. The moment I finished the book, I vowed that I would forever put my health at the top of my priority list. So on that day, I broke the insulin-producing, inflammation-promoting, addictive diet that I had ignorantly been poisoning myself with my entire life.

The first few days were difficult. I was irritable, I had headaches, I wasn’t satiated regardless of how much I ate. After the  brutality of what I now know was withdraws (as I would consume grains with virtually every meal, and indulge in dessert or candy multiple times a week), I was on the up.

Within two months, I inadvertently lost about 12 pounds of fat. My daily stomach upsets had almost diminished, and most importantly my chronic pain became less and less frequent. My mood had stabilized, my sleep had deepened, and my energy had increased significantly.

It’s truly been a miracle. I couldn’t remember the last time that I could go through a whole day without a terribly upset stomach or excruciating pains. And now those aches and pains are few and far between. I have never felt healthier and happier in my life. All that I can think is that the world needs to know this! There is basically a miracle pill out there that can make you healthier, happier, stronger, and live longer!

In fact, I am so in awe of the miracle that is the Primal lifestyle that I have taken the step towards sharing this invaluable knowledge with the world. I began the Primal Health Coaching program a couple of months ago, and I couldn’t be more thrilled to bring to others what The Primal Blueprint has done for me. 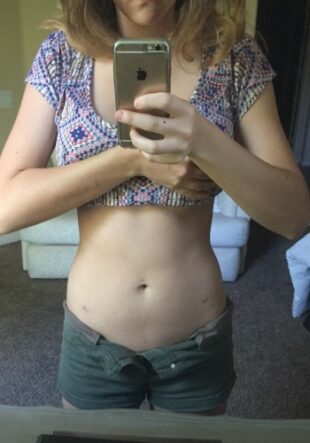 There are so many people out there suffering from chronic pain and inflammation that rely on daily medications to get even an ounce of relief. They feel confused, angry, hopeless, and weak. I know because I was once that person. Thanks to the Primal Blueprint, instead of allowing my diagnosis to mark my life with woe, I have used it to propel me out of the darkness and into the light—towards chronic health and away from chronic illness.

So from the bottom of my heart, thank you Mark and all of you at Primal Blueprint, Primal Kitchen, and Primal Health Coaching for changing my life and providing the information and support to sustain the healthiest lifestyle possible. I look forward to continuing to learn as much as I can and sharing this wealth of knowledge with all that I can.