I Find This Journey a Joyous Experience

I started my Primal journey in mid-2007 at age 47. I was tired of being fat with a fat belly. I was tired of not feeling good when I got up. I was tired of the arthritis in my lower back which made it hard to walk some days. I was tired of being tired. I had blood sugar problems and was concerned I would become diabetic. I refused to believe it was an inevitable consequence of getting older. I had been reading books on sugar addiction and thought “That’s me”!

I started Atkins Inception phase and stuck with it for 3 months. The first 10 days were agony! I felt sick and groggy, but I stuck with it. By 2 weeks, I realized I felt pretty good. I did not have the morning aches and pains. My head was clear and I had lots of energy. Because I felt so good, and because I had other people around me trying to find a healthier diet, I was able to stick with that very strict diet for 3 months.

I had kicked the sugar addiction, but was really craving things with wheat. I tried adding back starches by having some pasta one night. The next morning was just agony. My back hurt so bad I could barely get out of bed and walking was extremely difficult. I decided I was gluten intolerant. While I did continue to include starches in my diet, by staying gluten-free I was mostly pain free.

I moved to a new job in 2008 and left my health conscious friends behind. (I work on a contract basis so it is common for me to change jobs every 2-3 years.) While I tried to stay low carb, no one around me saw the benefits, including my husband. Without the support of other people doing low carb, I found it too hard to resist bread, potatoes, and corn, though I did stay mostly gluten free (arthritis pain was a great motivator for that). The weight I had lost on Atkins came back. 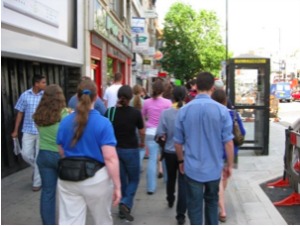 That’s me in the ponytail, blue shirt, and white pants touring on a London street summer 2008. I particularly notice the fat arms and dimpled elbows.
In 2009-2011 I was in South Wales with my husband, who was pursuing a Masters degree. I found staying gluten-free was easier than in the U.S. I found that Europeans in general were more aware of where their food came from. Produce and meat were labeled with the farm it came from. Organic and GMO free was easy to find. Starches were also easy to find, especially white potatoes. I was doing some work in Ethiopia at the time, where people in general are not concerned that they are getting too many calories. Being fat was a sign of wealth and prosperity. While it was easy to eat modest amounts of protein, carbs were a large part of the diet. Injera, a bread made from teff flour, was used to pick up and eat the various colorful and spicy dishes served at each meal. While teff is gluten-free, I was eating a lot of high-carb food.

In 2012, now back in the U.S., I started a new job with several of my buddies from 2007 and some new health conscious friends. A small group of us made a habit of eating lunch together daily, and dinner once a week, and we encouraged each other in Primal eating habits. I’m not sure when I found Mark’s Daily Apple, but it was around this time period. From 2012 through 2013 I lost 40 pounds and felt terrific. My husband liked my lighter look, but I still could not convince him to try Primal, even though he wanted to lose weight.

Here I am at Christmas 2013 at the Alamo, down to 165. I had more weight I wanted to lose, but my weight loss stalled. I kept to Primal for many months, but I was discouraged by the lack of weight loss. My contract ended and I parted ways with my Primal buddies. I gained back all I had lost, though I was much better at staying gluten-free than I had ever been. 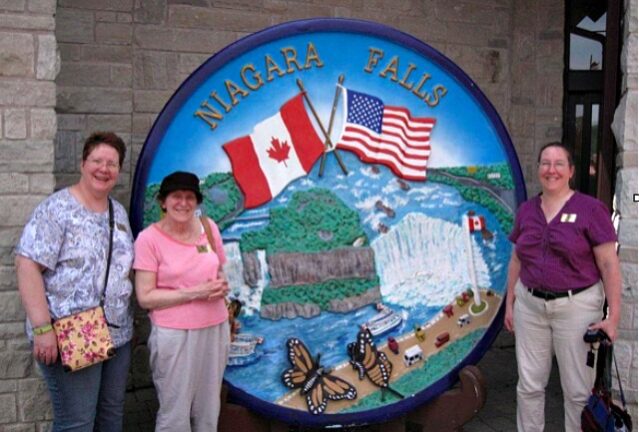 Here I am summer 2016 with my family at Niagara Falls. I was not quite back up to 205, but you can see I’m much heavier than the previous photo. And I’m not the only person in my family struggling with excess weight!
At the start of 2017, I was back up to 205 pounds. I went back to low carb eating and lost 20 pounds in the first 3 months. Then my weight loss stalled for 6 months, but I stuck to the low carb diet. Mark announced he was publishing the Keto Reset Diet and I determined to get it, read it, and figure out what I was doing wrong. Not only that, my husband (100 pounds overweight, now diabetic too, and diagnosed with bipolar II), finally cared enough about his health to change his diet.

I found that while I was pretty good at eating low carb, I was actually getting too much protein and not enough fat. I decided to go full keto with a reduced eating window and my fat started melting off. My husband was unwilling to give up sugar and starches, but I convinced him to get his daily carbs down to 150 grams (and now he is down to 100 grams a day). He started losing weight as well. For both of us, the change of diet has brought increased energy which makes it easier to exercise more. My husband’s moods have evened out. We are looking forward to his next checkup to see if his blood sugar numbers have improved.

We have both found that eating low carb is not the hard part of Primal. The hard part for us is keeping the amount of protein we eat to a modest level (especially since neither of us is a big salad fan). Since we are both living a Primal lifestyle, it is easier for each of us to stay with it. Every day is not a perfect Primal day and that is alright too.

I do not have a current photo, but I am just a bit below my weight in the San Antonio picture and look much the same. I just had to buy another new belt. I am definitely losing belly fat and am generally thinner all over.

While the weight loss is great for so many reasons, the best part for me is how I feel. I wake up naturally at dawn each day feeling really good. I have tons of energy throughout the day. I do not worry about when I will have the next meal. I’m playing around with new ideas for recipes, especially vegetables. I’m having fun with this, so much so that I completed Primal Health Coach certification for my own education and to help others who want the benefits of Primal. I am considering taking a degree in Nutrition and making a complete career change. I am not perfect, I am not yet at my ideal body composition, but I see Primal as a journey, not a destination. I am finding this journey a joyous experience.