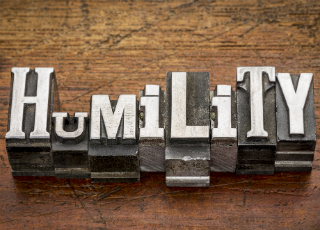 I’ve gotten a lot of feedback about my leadership post earlier this year—particularly from people who connected with the humility aspect. It’s a characteristic I think most people would agree is in short supply these days, but most of us still admire it when we see it. In truth, little in our culture today encourages a humble disposition, and I think that’s a relatively new development. More than ever it seems to be the loudest, boldest, and (often) most obnoxious voices that garner our attention. Brashness somewhere along the line became an asset rather than an irritation. We’re told we need to do more, be more, have more, “fight” for what what we presumably deserve, and push our way to the front if we want our good in life. Put yourself out there, talk yourself up, and—above all—look out for number one. Is anyone else exhausted by these instructions? The key (and related) question of the day, however, is this: what would Grok have said about this social shift?

First off, I think it’s safe to say he would’ve voted anyone exemplifying said traits off the island, as would have the majority his contemporaries—for very good reason. A band full of overgrown egos would’ve spelled disaster for survival in his day. In the “immediate” economies of hunter-gatherer life (“simple” hunter-gatherers who relied on no food storage in particular), daily cooperation was a must. Everyone upheld their duties to the band, and the group’s good was the organizing principle of each and every day. There simply wasn’t room for entitlement.

In keeping, band cohesion relied on every member’s adherence to the social codes that were passed on through story and ritual. These codes of collaboration and reverence weren’t just rules to be followed to avoid conflict or ostracism (a situation with significant, if not deadly, consequences in those days). Band codes were a spiritual as well as social ethos. Members participated in this ethical and spiritual tradition, and by doing so saw themselves as co-creators of it across the generations. This contribution was a key and honored aspect of their own individuation. Their individual identity was, in part, constructed and fulfilled through the personal upholding of the age-old codes.

In other words, our ancestors defined themselves by more than their bundle of desires, moods, and affinities. They viewed themselves as actors in and stewards of something bigger than themselves. While they enjoyed freedom to move in and out of bands as season or whim dictated, who they were was always, in part, how they lived through the communal codes, the story of their individual and collective humanity, wherever they happened to be settled at the time. Warding off conflict, self-centered action, and power struggles offered the group the focus and cohesion needed for optimum chance of survival.

As I mentioned a few weeks ago, a near universal element in hunter-gatherer ethos was horizontal “egalitarian” leadership. Just as members each upheld the social contract of collaboration, so they all contributed to decisions related to the group. If more focused leadership was required, group consensus—often over an extended period of consideration—determined the selection. Humility was a key merit in this choice. A humble person was a person who wouldn’t be enamored by a taste of “power” and one who would be less likely to overstep the bounds of his/her influence. A humble person was one who could be trusted to serve the welfare of the group. Blowhards and browbeaters needn’t apply.

When cohesion was maintained, the band was safer and more prosperous. Everyone had what they needed based on participation rather than entitlement or power. Problems were more likely resolved peacefully and without lingering resentments that would carry over and disrupt ongoing collaboration. Likewise, balance between human need and natural environment was upheld in a conscious, reverent way. Their respect for the society and natural world around them kept them alive and thriving.

If we accept the virtue of humility for Grok’s time, there’s still the question of how its value transfers to our own age. What does humility mean to the human story as it continues today?

First off, I think we commonly misunderstand humility, seeing it as a low opinion of one’s self rather than what I’d suggest it is: situating one’s self-concept within the steadying perspective of a broader backdrop.

We’ve all met people who believe themselves to be the end-all. Their self-absorption and self-aggrandizement come with plenty of liabilities. Not only are they not fun to be around, but their lack of a larger perspective discourages them from imagining larger impacts of their decisions and prevents them from objectively assessing their own motivations or capacities. How is this an asset?

The core value of humility is, as it was for our primal ancestors, to place ourselves—our abilities, our desires, our purpose—against the larger contexts that exists. This doesn’t need to be a religious or even cosmological issue. To put it simply, it means moving through life and relationships and business valuing ourselves but deciding to see our place and choices through a broader lens and opting not to place ourselves higher than others.

Many people assume this entails limiting the expression of their talents in a false modesty. Others just as unfortunately believe they should think of others’ needs but not their own. Still as wrong, some believe they shouldn’t try to make a mark with what they have to offer.

I think there are substantial differences at work here. You can—and should—offer your potential to the world because that’s actualization. No one in Grok’s day imposed a guilt trip to the best hunter in the band; however, that hunter saw his role for what it was within the group and within the stories of his ancestors. He was part of a larger picture, and it offered perspective. Living your purpose doesn’t equate to indulging in pomposity.

Rather than seeing our particular skills or smarts as justification for authority, we do better to view them as tools. This is what I have to work with in life. It will help me make a good living for myself and my family. It gives me a way to contribute to the greater community, however I define that for myself.

Likewise, people living from humility will position their purpose within a greater circle of reflections and feedback. They’ll be open to other opinions and methods. They’ll be able to work more cooperatively. They’ll be less attached to their own power and more focused on the process. As a result, guess what? They’ll be more successful in their endeavors. They’ll have a more fulfilling family life. They’ll enjoy greater rapport with their colleagues and clients. They’ll have access to others’ insights and perspectives, which they’ll be able to understand are resources they can apply for their own and others’ benefit.

Humble people will be more trustworthy and thereby attract (and retain the cooperation of) others, who want to partner or collaborate for mutual advantage. One study, for example, emphasized the abilities to admit mistakes, to acknowledge others’ strengths and to teach others as solid predictors of people’s success and that of the organizations they worked for. Another study demonstrated that managers who were humble inspired more commitment and receptivity from their employees. I would humbly suggest the same goes for personal relationships.

Finally, when we cultivate humility, we don’t get lost in the entitlement lie that tells us we don’t need to work for what we want. In Grok’s day, before the rise of hierarchy, that wouldn’t have flown. Today we do just as well to understand none of us is above doing the work that needs to be done—whether it’s within our families, professions or communities. Showing up and taking part with a healthy dose of humility not only fosters our own sense of self-discipline, but it opens the door to the benefits of communal belonging and endeavor—what we’re all wired to appreciate. Never underestimate the timeless power of tribe and purpose—in Grok’s day or our own.

Thanks for reading, everyone. I’d love to hear your thoughts on humility and what it means to you. Share your comments, and enjoy the rest of your week.