How Using Fat for Fuel Can Boost Athletic Performance 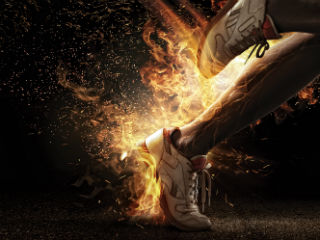 A few weeks back, I explored the potential benefits using fat as your primary fuel can have on cognitive function. While the strongest research centers on people dealing with age-related cognitive decline and other neurodegenerative diseases, and whether burning fat and ketones can boost cognitive function in healthy adults remains unconfirmed, the totality of the evidence suggests it can provide a benefit. Today, I’ll be discussing a related topic with more solid scientific footing: the effects of fat-adaptation on athletic performance.

Detractors of high-fat, low-carb diets often claim that they’re bad for physical performance. They may offer some help to people with certain forms of brain cancer, they can definitely help obese people lose weight quickly and easily, and the ketogenic diet is the gold standard treatment for epilepsy, but fat-adaptation severely hampers your ability to perform on the field, on the track, and at the gym.

Is this really true, though?

While the effect of fat adaptation on anaerobic performance is unclear, it can actually improve many other measures of physical performance. There may even be cause for anaerobic-centric athletes to get fat-adapted, if only for part of the time.

Let’s dig right into the benefits.

Fat-adaptation makes you better at burning fat and less reliant on muscle glycogen to fuel your efforts. Any amount of work you can accomplish by using mostly/all fat rather than mostly/all glycogen is evidence of efficiency. As the effort increases (with appropriate diet and training over time) and you can still do most of it burning fat, you spare glycogen for even greater efforts or for use far later in the event.

In one study, endurance athletes who’d been on the ketogenic diet for an average of 20 months burned 2.3 times more fat at peak oxidation, burned 59% more fat overall, and did so at higher intensities (70% of VO2max) than endurance athletes on “normal” diets, for whom fat oxidation dropped off and sugar-burning dominated at 54.9% of VO2max. This means that their anaerobic threshold was much higher than conventional athletes; they could go longer and harder using fat and ketones. Glycogen reserves were similar in both groups.

You can access your large reservoir of adipose tissue.

Glycogen’s great to have around for intense activity, but we can’t store much; the most muscle-bound man probably has the capacity for just 600 grams of glycogen in his liver and skeletal muscle tissue. That’s only 2400 calories. Even lean athletes without visible body fat possess tens of thousands of calories worth of clean-burning, reliable adipose tissue. Fat-adapted athletes can burn a greater proportion of body fat before dipping into the relatively scarce and precious pools of muscle and liver glycogen, thus preserving the latter for later use.

You’re not tethered to food.

Back when I was a sugar-burning athlete, I had to keep carbs on my person at all times. Yeah, yeah, I burned every last thing I ate, but I couldn’t go longer than a couple hours without eating. And it wasn’t just the physical burden of eating all the time that got to me. It was also the psychological burden of needing to eat all the time. I felt powerless.

That ended when I became a fat-burning beast. Now, I skip meals. Or the meals skip themselves because I’m just not hungry. When I get that early morning text from a buddy inviting me on a hike, I accept it without worrying about “carbing up” first or loading up my backpack with snacks.

This also means you won’t have to carry several pounds of glucose goo just to make it through a race.

Since you need less oxygen to do a given amount of work when you are fat adapted, burning fat for fuel makes aerobic activity feel easier. You could be matching or even beating your best times and feel great doing it. If you’re at all like those long-term keto endurance athletes, you might get to the point where close to 70% of VO2max feels downright comfy. This gives you a mental edge. Rather than grit your teeth and power through a grueling session, you can actually enjoy your training.

Plus, if your “discomfort threshold” goes up, you can handle a lot more work before pain and suffering set in.

Mitochondria are the power plants of our cells. They turn caloric energy—fat, carbs, ketones—into real-world energy, or ATP. The more mitochondria you have, the more ATP you have at your disposal. The best way to spur the creation of new mitochondria is through AMPK activation. AMPK increases in states of energy deprivation. Low-calorie or low-carb diets, low glycogen levels, starvation, ketosis, and certain types of exercise all increase AMPK. Anything that reduces the calories coming in and/or increases the calories going out will probably increase AMPK.

When excess energy overloads the mitochondria’s capacity to convert it in ATP, bad things happen: insulin resistance, generation of reactive oxygen species, and oxidative stress. Having more mitochondria increases your conversion capacity; you can actually handle more energy coming in. And you get more usable energy for fun and important stuff like running sprints or marathons, lifting weights or toddlers, reading books or emails, and being productive at work.

Fat isn’t an instant performance boost. No one’s eating a stick of butter before the race and claiming superpowers. Fat-adaptation for athletic performance is a long game: by improving substrate utilization, building new mitochondria, increasing metabolic flexibility, and increasing the amount of fat burned for a given intensity, athletes enjoy a bigger engine.

This is the “train low, race high” paradigm gaining prominence in the endurance world. By training with low glycogen levels, you get better at functioning without glycogen. When race time rolls around, you carb up and get the best of both worlds: enhanced fat oxidation and plenty of glycogen.

That’s how Zach Bitter, a fat-adapted ultramarathoner, trains. He spends most of his training time on a high-fat diet, but carbs up for and during races. Seems to be working okay for him, if you consider running 7-minute miles for 12 hours straight and beating the US 100 mile world record “okay.”

Note the distinction between training and competition. I’m not suggesting that Lebron James go on an epilepsy-worthy keto diet during the NBA Finals or that Michael Phelps fast before an Olympics relay. I am suggesting—and James would probably agree, as he’s gone low-carb paleo to drop body weight during off seasons—that athletes can benefit from training while fat-adapted and low in glycogen even if they intend to “race” while high in glycogen.

Okay, getting fat-adapted can clearly benefit endurance athletes, but what about maximal intensity—anaerobic activity that demands carbohydrate? It remains to be seen. While we haven’t seen many NBA point guards, NFL running backs, CrossFit Games runners-up, or Grand Slam winners going ketogenic during the season, wait for it. I’ve heard some very interesting things from top-level athletes and the people who work with them about high-end power and intensity on long-term high-fat diets. No studies (yet), just whispers.

We do have studies where fat-adapted athletes beat sugar-burning athletes at high-intensity intervals due to their increased ability to burn fat and retain glycogen. Critics might say the intensity of those intervals wasn’t quite high enough—six 4-minute intervals on an incline treadmill with two minute rest in between—but that’s moving the goalposts.

In another study, trained adults followed a normal diet (moderate carbs, moderate fat, moderate protein) for seven days followed by a low-carb diet (54% fat, 5% carb, 35% protein) for seven days. After both arms, the researchers subjected participants to a series of physical tests: handgrip strength, max rep bench press, 1 rep max in squat and bench, vertical leap, and Wingate test. These were legitimate tests of maximal strength and power output. The Wingate test, for example, consists of 4 x 30 second all-out sprints on a stationary bike set to the highest resistance. Puke buckets are standard protocol. Yet despite losing more body weight after the low-carb arm, the participants suffered no hits to their performance.

We know that elite gymnasts can live and train on a high-protein, high-fat ketogenic diet for 30 days, lose body fat and body weight, gain lean mass, and maintain their physical performance.

I know I feel great playing my Ultimate games, usually on an empty stomach, sometimes with a scoop of Primal Fuel, occasionally with some exogenous ketones, always fat-adapted. Three hours of slower, steadier movement punctuated with bursts of all-out sprints aren’t a problem.

Most of you folks have different priorities. Training to compete isn’t your day job. You want to get stronger, faster, fitter, and look better naked. You want to be more physically capable. You want to keep up with your kids or grandkids. How can fat-adapted training help non-elites?

It’ll build up some extra mitochondria to take the load off your body, reduce oxidative stress and insulin resistance, and improve your capacity to burn energy.

You won’t have to pack two pounds of trail mix just to finish a hike.

You’ll conserve glycogen for when you really need it.

The physical performance of every human being on this planet, from elite athletes to hobbling grandpas, can benefit from spending some time and exercising in a fat-adapted, glycogen-depleted state. Why don’t you give it a try?

If you want to get really good at this stuff, check out Primal Endurance.

Thanks for reading, everyone. I’d love to hear about your experiences with fat-adaptation down below. How has it impacted your training and performance?