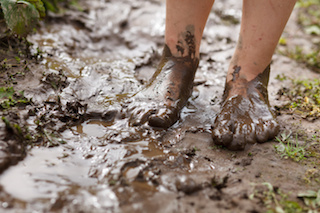 Last week, I introduced the concept of the skin biome: the vast communities of microbes living on and in our skin. For some, it was unsettling. Gut microbes are out of sight, out of mind. But skin microbes are on us. They’re crawling, reproducing, digesting, and secreting various fluids and lipids all over the surface of our bodies. In people who’ve been conditioned to use soap and water to remove every last trace of bacteria from our hands and skin, the idea that our hands, faces, arms, and torsos are teeming with microbes – and that it’s probably unwise to remove them all – is hard to swallow. We might even recoil at the thought. I mean, viruses and mites living on us? Really?

Yeah. And we need them to be healthy and vibrant because skin bacteria help determine our skin’s immune response, vulnerability to allergies, wound healing, and susceptibility to certain skin diseases, to name just a few things they do for us.

We have a pretty good idea how to cultivate a healthy gut biome. We may not know everything (and we probably never will), but fermented foods, prebiotic fibers, and nutrient-dense fat, protein, and carbohydrate sources are a good start.

How about cultivating a healthy skin biome?

You pick up a lot of your skin bacteria from environmental contact. For example, you’re more likely to share skin bacteria with your spouse, your roommates, your pets, and your friends than with strangers. One recent study into the skin biome changes of roller derby players found that, after matches, opposing teams shared many skin biome similarities that didn’t exist before. They’d swapped bacteria.

Your home’s biome has an impact on your own. Low bacterial diversity in one’s immediate surroundings is linked to skin diseases and subsequent lower skin bacterial diversity. I don’t know if you need to go so far as to sequence the biome of your bedroom (or if that service is even commercially available), but if you’re having skin issues your home might need a deep-cleaning. Consider trying a probiotic household cleaner. There’s no real research – yet – but the concept is sound: instead of sterilizing the house with traditional cleaners that leave it open to recolonization by pathogens, introduce beneficial microbes that prevent recolonization.

Avoid antibacterial soaps and lotions. You’re already doing this, probably. Triclosan, the principle antibiotic found in antibacterial soaps, has received lots of negative press, even in the mainstream. It crosses the placenta and induces antibiotic resistance. But make sure you’re not using it. Check your labels for anything resembling “anti-bacterial.”

Consider probiotic lotions. One lotion containing Enterococcus faecalis SL-5 reduced acne lesions and countered the effect of acne-causing bacteria. You could make your own, too. Seriously: researchers just added E. faecalis SL-5 probiotic powder to a commercial lotion to produce the anti-inflammatory effect. However, I’m not yet sold on the idea that probiotic lotions are necessary (or even helpful) in the absence of skin problems.

Get a dog. Dog owners have less eczema, even if they have a dog allergy (the same is, sadly, not true for cat owners with cat allergy), most likely since dogs tend to roll around in everything they encounter and rub against us any chance they get, thereby increasing the microbial diversity of our homes and mixing their rich skin bacteria with ours. Dogs are filthy, and that’s probably a good thing.

Roll around in the dirt. Okay, not literally. Gardening, playing outdoor sports that involve intimate contact with the soil, and making mud pies are all somewhat more socially acceptable alternatives to taking dirt baths like a hog. Then again, horses, pigs, dogs, and birds may be on to something with their tendency to roll around in the soil. So, I dunno – try it?

Try AOBiome spray. AOBiome is a probiotic body spray that promises to replace soap. Rife with the same ammonia-consuming bacteria abundant in soil and fresh water (which is why you should roll around in the dirt sometimes), it colonizes your body with bacteria that consume sweat and leave you feeling so fresh and so clean. Some months back, a NY Times writer tried it for a few weeks, foregoing soap, shampoo, and deodorant entirely. It went mostly well. Her skin improved, buoyed by the natural oils soap normally washes away. While she didn’t smell bad, she had an odor that she wasn’t used to smelling. We’ve been conditioned to fear any and all body odors, which I think is a mistake.

Wash your hands with soap, but don’t be so liberal with other parts of the body unless they really need it. Handling raw chicken? Yeah, wash up. Flu going around? Wash up. Out hiking? Regular soap isn’t chemically antibacterial, so using it won’t promote antibiotic resistance or wage chemical warfare on the good guys, but it does physically bind and slough off microbes. For myself, I?ve cut way back on soap and shampoo usage. I shower daily, but use soap only about every other time, mostly to wash off chlorine (I?m in the pool almost every day), and shampoo about once a week. Salt (from ocean plunges) and dirt (from playing Ultimate and general cavorting and frolicking) don’t worry me. If I?m sweaty, from a hard workout, water does the trick. And you can ask anyone who’s attended PrimalCon, where I give out hugs quite liberally: I don’t stink. (Do I?)

Limit or avoid antiperspirants. Using them reduces microbial diversity of the armpit, and they probably just make you smell worse in the long run. Sweating is a natural physiological process; it’s unwise to curtail it by literally clogging the sweat pores with aluminum. Scientists have dubbed armpits the “rain forests” of the skin biome. They’re a powerful source of microbial diversity. I almost wonder if taking armpit swabs from healthy individuals and applying them to parts of your skin afflicted with dryness or eczema could have an alleviating effect. Wouldn’t be surprised and it couldn’t really hurt. And actually, researchers from that armpit study have done that, transplanting armpit bacteria from people who don’t really smell to the armpits of people who do smell. They’ve gotten great results, according to the above article. Anyone want to try?

Though you might think only the topical application of antibiotics would impact the skin biome, oral usage has an effect. Oral antibiotics given to mice with skin wounds reduced the diversity of wound bacteria and dampened the immune response, thus delaying wound healing.

Get comfortable with the idea of “bacteria” on your skin. This is the hardest, most important step to take. The knee jerk reaction to “bacteria” is a negative one. It shouldn’t be, as the last two posts have shown. If you can accept the place bacteria have on your body, maybe you won’t feel the need to scrub down twice a day and rub lotions all over.

As time goes on and research continues, we’ll learn more about healthy practices for a healthy skin biome. For now, though, these are simple, effective strategies that almost anyone can experiment with.

Let’s hear from you guys, now. What are you hygiene habits like these days? How much soap do you use? Are you quick to wash every last speck of dirt from your skin? How’s your skin health?