How to Raise Creative and Self-Reliant Free-Range Kids 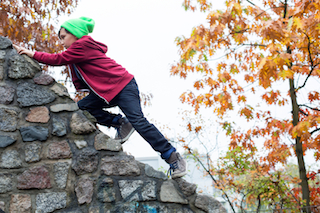 I always find it funny when I write about something and suddenly I find other incredible angles of the topic coincidentally pop up in my newsfeed or even conversation. (I also loved reading the gamut of stories and opinions on the board.) Such was the case a couple weeks following my post on free-range kids. It’s true some other major media outlets took up the general subject in their op-eds, etc. More interestingly, I’ve stumbled across commentaries that cover everything from the value of tree-climbing to the no-fuss, no-guilt philosophy of 70s mothers (as the title notes, drinking Tab and locking us outside). Sound familiar to anyone?

The most intriguing find, however, was an NPR article highlighting a children’s “adventure park” in Wales inspired by the unofficial play havens of bombed out buildings during/after WWII. The unconventional playground, called simply “The Land,” is apparently one of dozens in Europe (with a small handful in the U.S. – including one in Berkeley, CA, and a few in New York).

The scene is probably every kids’ primal dream: a few acres of zip lines, hills, mud, fire, paints, chains, climbing structures, piping, tires, dens, hammers and nails, random boards, and all manner of, well, junk. (I mentioned the hours in New England dumps a couple weeks ago, and it’s apparently an official and universal truth: kids just like junk.)

The designers and “playworkers” (specially trained observers who offer strategically minimal interaction) emphasize the importance of “loose parts” for this kind of open-ended “play work” – e.g. pallets, boards, tools, etc. with no fixed or pre-associated function.

Such an environment, so antithetical to most traditional playgrounds, encourages self-direction, managed risk and social negotiation from the relative absence of any structure. (If you find yourself drawn to the concept, by the way, for your children or – admit it – yourself, they even offer a free PDF Play Work primer – a fantastically awesome resource.)

The concept casts playgrounds – and play – in a renewed light. In an era when swings and teeter-totters are deemed too dangerous, these parks refuse that safety-obsessive movement. (There’s something about rushing toward whatever everyone tells you is dangerous….) It also refuses the “precious” set-ups of perfectly arranged stations of toys or equipment that still suggest to kids what they’re supposed to do and cost more than most people make in a month. There’s nothing cute or stylish here. It’s ugly, and the kids like it that way.

What does it remind you of? Maybe nature – before we began to get caught up in the aesthetic arrangement of it. Nature when it was hands-on, when no one cared if you picked whatever plants you wanted, moved logs (if you were strong enough to lift them), threw rocks everywhere, walked in the mud. Nature when it was human habitat and not an endangered specimen or pristine gardenscape.

I think we find ourselves with this angle at an intriguing intersection of free play and free range. Not only are we obsessively restricting our kids’ parameters of place – the space in which they feel at home, competent to navigate, free to explore, but we’re relentless about planning or directing their play with everything from the over scheduled activity calendars to one-function toys to neurotic cleanliness.

Let’s eradicate their sense of communal space but make up for it by decorating their bedrooms to the nines. Let’s make sure they never so much as get a knee scrape but put them on ADHD medication before we even stop to question whether they simply want to run around a few times a day. We don’t have time for a green hour each day, but two hours of homework, and hour and a half of organized activities and an allotted hour on the iPad aren’t up for questioning.

It’s somehow become so easy to downplay play. But risky play, wild play, dangerous play? How do we justify anything presumably unessential to higher test scores – and remotely hazardous? The status quo might grudgingly accept that you have to let the little kids out to play for a short stint each day to help attentiveness and prevent major behavioral problems. When you try to then push the envelope and insist on play as more than a stretch break (for all kids – and maybe even adults)…that’s another story.

When we begin to look at the purposes of play and the diversity of its forms, it’s blatantly obvious we’re giving it short shrift. Well-known play theorist and advocate, Bob Hughs, is also one of the minds behind the development of the Playwork movement – and creator of the play taxonomy. According to Hughs, there are no less than sixteen types of play – all essential to cognitive, social, physical and emotional development (PDF).

Creativity has been called, for example, the most important factor for professional success in leadership. It’s little wonder, given that studies suggest free play (self-directed) supports a kind of a executive flexibility – the ability to switch out goals and directions.

For anyone who’s ever watched a horde of kids negotiate what to play or where to go or how to do something on their own, it’s clear adaptability is key to keep the peace and the fun moving forward. There’s a flow to it that might take their scenarios in a hundred different amusing directions, but for them it’s serious business. Fast forward twenty-five years, and that flexibility will work for them in their personal adult development. Yet, as Torrence test scores indicate, creativity is on the decline – paralleling the decline in children’s free time and free play (PDF).

Beyond the realm of success, however, is the question of general well-being and even emotional stability. Research has found strong connections between play and lower rates of depression and anxiety rates as well as the development of social empathy. Interviews with murderers have found that play deprivation was a leading (and unexpected) correlation at 90%.

Finally, from a Primal perspective, let us consider for a moment the definitions of just two of these: deep play and recapitulative play…. (PDF)

Deep Play is described as “play which allows the child to encounter risky or even potentially life threatening experiences, to develop survival skills and conquer fear.”

What about our current education system or even most families’ weekend activities addresses these needs? There’s so much to just these two theorized types of play I’ll have to cover them another time, but I couldn’t help including them here. Grok as ultimate playworker.

So, I get it. Not everyone lives near an adventure park. Not everyone lives in a neighborhood safe enough for 8-year-olds to walk by themselves for more than half a block. I’m not suggesting we put our heads in the sand. What I am suggesting is that we look at the opportunities we have available to us. In fact, maybe we could commit to an experiment. Let me throw out some totally random suggestions that open the door for wild, free-range, diverse, and self-directed play and invite you to offer your own inspired ideas.

Thanks for reading, everyone. Have you been to an adventure park or feel inspired to go build one? Have a great end to the week, and enjoy some deep and recapitulative play this weekend.