How to Overcome Inertia and Get Yourself Unstuck 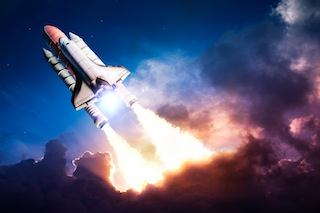 The 17th Century physicist Isaac Newton observed in his famous laws of motion that objects at rest stay at rest and objects in motion stay in motion unless acted upon by an outside force. You’ve perhaps experienced this phenomenon as you chase your kids’ baseball while it rolls for a block and a half as you curse under your breath. You’ve also maybe observed it when you’re parked comfortably on the couch after a long, stressful day and know it would take all the king’s men to move you from that spot.

While I’m half kidding about the second example, I’ve seen the principle of inertia up close in my work over the years. People who are genuinely committed to better health often fight a certain physical and mental resistance for a while before the force of their own hard-earned momentum finally begins working for them. Likewise, I’ve seen people who struggled early on to get their fitness routine off the ground eventually experience it as second nature. They breeze through their new lifestyle where before the push to change left them in frustrated tears. (Maybe you’ve been there.)

We tend to think of health change solely as an attitude adjustment. If our mental game is good enough, then the physical effects are sure to follow. If we “fail” or backslide, it’s because we weren’t committed enough. Likewise, if we’re healthy and fit, we can look at those who aren’t and automatically judge their perceived lack of effort: “I got my workout in. The same choice is just as easy for that person.” or “I can walk by the vending machine without temptation. It’s obvious he/she doesn’t have any willpower.” Are these statements really fair – or even accurate?

Is the inertia all in our heads? Should exercising on “day one” really be any harder than on “day ninety-one” when workouts are tailored to respective fitness levels? What about eating? Does healthier eating really become more appealing over time, or is just a matter of mental discipline and habit? Is it just our tastes and routines that adjust, or do our brains change as well? You might be surprised….

There are some unfortunate facts about heading down a bad road. Our choices, especially when they become patterns, have more than short-term impact. While eating a cookie this afternoon won’t induce any serious changes in your brain or body (although there will be short-term consequences), having a cookie most afternoons – particularly when paired with other unhealthy choices – can over time put you on a physiological track.

For example, obesity and inactivity, obesity and poor eating – they’re more chicken versus the egg questions than we sometimes give them credit for. The easy assumption, of course, is to assume that inactivity causes obesity (or significantly contributes to it), but it’s also a result of it. Studies increasingly highlight how obesity can result in a persisting fatigue as well as how processed foods make us “more tired and sedentary.” Additionally, established routines of processed junk food alter our brain’s reward circuitry and decreases our interest in novel foods and balanced dietary choices.

The take home message here? It’s not a simple, straight line of bad choices to bad results. It’s a messy cul-de-sac of poor choices, unwanted results, and established physiological resistance to change. In other words – it’s a miserable cycle that feeds on itself.

The path is clear, I’d say. You can move out of the cul-de-sac anytime you want, in fact. The issue appears to be this. There’s no shortcut or leisurely cruising our way out. It’s more of a leave your car by the side of the road and walk (maybe literally and figuratively).

In a culture hell-bent on selling convenience and latching onto quick-fixes, it’s critical to kick that mindset to the curb on your way out of Dodge. Count on the beginning of the endeavor to be the most arduous part and plan for that. If it’s not, you’ll be fortunate and have extra energy and support for further progress, but if it is, you’ll be prepared.

A study of nearly 100 people over several months, for example, suggests it takes an average of 66 days of repeating a new behavior for that new addition to become “automatic” habit. Not all behaviors take equal time either… New exercise routines took approximately 50% longer to cement into habit as eating/drinking behaviors.

On the other, more positive side of the coin, sticking with our good intentions eventually can reward us multiple-fold as our efforts end up supporting each other and our bodies gradually build momentum. (Objects in motion stay in motion….)

As an example of our efforts cross-pollinating, so to speak, research has demonstrated how exercise actually reduces our brain’s neuronal responses to food rewards. In other words, when we exercise, we have a lower motivation to eat, we anticipate eating less and we don’t get the same heightened pleasure from eating.

Likewise, persistent healthy food choices will over time recalibrate our brain’s reward system. Brain scans of study participants who began a healthier diet protocol after six months showed enhanced reward sensitivity to healthy foods and a reduced response to unhealthy choices. In other words, the brain takes a while to catch up, but we can rewire our way out of bad patterns.

I tend to believe knowledge is power in those situations – particularly knowledge about where you’re starting from and what you can expect. I’ve heard people say they’d rather not know if they’re up against a tough row, that they don’t want their parade rained on, that their motivation will be enough to carry them if people just don’t “discourage” them with warnings and so-called reality checks. Maybe that works for them. But I’ve seen plenty of folks who mimic the language earlier and tell themselves it’s no different for them – that they can just as easily do what others are already doing. A large percentage of them later give up before they’ve gotten off the ground.

Would you want to know these points right out of the starting gate?

At issue here is what can we do with these findings. How can we use them to build effective strategy rather than apply them as excuse to not even bother starting? I think the key is to imagine a rocket launch. It takes a massive and sustained boost to get beyond gravity, but once you’re above the strongest pull backwards, you find yourself in an amazing space.

What we’re looking at here is more than inertia really. It’s not just about getting moving but about the extra effort and patience to overcome negative physiological as well as behavioral patterns. If we can understand that there will likely be a lag time between our mental decisions and our bodies’ progress we’ll be more apt to have patience with our own process. Likewise, we’ll know to front load that process with effort, support and other motivation-boosters. We can create a series of lower threshold goals along the way and choose to value quicker advances and small wins even if they’re not the big results we’re really gunning for. (Those will come, too.)

The tipping point in behavior change, it appears, isn’t scare tactics or additional justification but simple accessibility. Making your process more accessible – easier, clearer, more blatantly simple to follow – can be the best strategy to begin.

Knowing the behavioral and physiological trends in addition to the essential knowing yourself – what cues you’re likely to respond to – will help you establish the routines that will be most effective in your daily life. With time, you brain and body will catch up with your intentions, and you’ll be working with the added bonus of momentum on your new Primal track.

Thanks for reading, everyone. Share your thoughts on inertia, momentum and your Primal gains. Have a great end to your week.