A Primal commitment to regular consumption of pastured, organic (expensive/hard-to-find) meats often means buying in bulk when a good price presents itself. Grass-fed steak runs rather pricey, so the average Grok on a budget can’t survive buying a juicy ribeye from Whole Foods every night; he’s got to pick his spots and stock up when he can. If that means buying fifteen pounds of New Zealand lamb leg steaks in a single go just because they dropped to four bucks a pound, so be it. Thus, we’re left with freezers full of identical cuts of steak, roasts, and slabs of meat, along with a serious conundrum: what the heck do we do with all that meat? Maybe good meat can stand on its own merit (along with a bit of salt and pepper), but even the purest of carnivores will eventually tire of eating the same cut prepared the same way, day after day. And if you’ve got picky kids or spouses, forget about serving the same roast or the same chicken thigh over and over. You’ve got to switch flavors up or risk burn out – and possible regression to fast food and frozen dinners.

An arsenal of recipes is always good to have at your disposal, but the more complex ones take planning to implement, and they often involve buying a bunch of ingredients for a certain dish that never get used again (you could use them again the next night and make the same dish, but that doesn’t really solve our problem, does it?). That’s wasteful, and if you’re the type to stock up on affordable meat, waste is probably anathema to your method. Marinades may be a better option. They (supposedly) help tenderize meat, they’re easy to prepare (and then forget about), and they provide a wide-enough range of flavors, textures, and options to keep even that tenth steak in as many days interesting and delicious. Plus, once you successfully marinade your meats, you can simply wrap ‘em up tight and freeze for later, effortless use.

Most popular marinades are composed of three essential, basic ingredients: a fat (usually an oil), an acid (vinegar, wine, or citrus), and flavorings (spices, herbs, garlic). There are other ways to marinate meat, though, including using dairy or the tenderizing enzymes found in things like ginger, kiwi, papaya, or pineapple. Each “school” of marinades has its pros and cons.

Proponents of the acidic method claim it breaks down the tough bonds holding proteins together. This is called denaturing, and denatured proteins form a loose mesh with their neighbors rather than tight coils. Initially, the loose mesh traps water and the result is a juicy, moist piece of meat, but too much acidic marinating can actually have the opposite effect. More than two hours in a highly acidic (pH around 5 or lower) marinade tightens the protein bonds, expels the trapped water, and results in tougher meat. To avoid this de-tenderizing, go a little lighter on the lime, the lemon, or the vinegar than you might be inclined. If it’s the flavor you’re after, you can always add the extra acid right before or after cooking. Otherwise, you might “cook” the meat (think ceviche, where the lime juice “cooks” the seafood) prematurely.

Enzymatic marinades work by breaking down the connective tissue in meat. You can buy commercial meat tenderizers, but most of them are derived from papaya or pineapple, so I’d recommend just using the fresh ingredients themselves. As with the acidic marinades, you don’t want to use enzymatic marinades for too long. The meat won’t get tougher, but it may get excessively mushy (as opposed to just tender). Two hours is a good cut off time, to be safe.

Dairy is the mildest marinade, and, given enough time to work, the most tenderizing. You’ll generally want to use Greek yogurt or buttermilk (something slightly acidic) – think Indian tandoori or Southern fried chicken. We’re not sure if it’s the mild acidity of the dairy that tenderizes the meat, or if it’s the calcium activating tenderizing enzymes in the meat itself (both theories have been floated around online), but we do know that it works. This obviously won’t be an option for Primals who avoid dairy altogether.

The best marinades are often the simplest, made with fresh, quality ingredients that just taste really good together. In a pinch, you can throw together a few items – say, olive oil, lemon, garlic, and salt – that mesh well in your mouth and be confident they’ll work as a marinade, too. Or, you can get complex and creative with a wide range of ingredients. For those of you who aren’t totally confident in your ability to create on the fly, we’ve put together a list of ten Primal-approved marinades for a variety of meats.

This is a powerful, highly flexible marinade. It pairs well with beef, pork, chicken, and fish, but the high acidity makes it easy to over-marinate. Don’t go over an hour with this one.

Mix it all up and cover your meat completely. Remember, don’t marinate for longer than an hour.

This recipe is adapted from an Alton Brown recipe. We love his scientific approach to cooking, but his ingredients sometimes need a Primal adjustment. This is one of those times. Oh, and any thin cut of steak will do: skirt, flap, Milanese, etc.

Mix it all up and cover your meat completely. Marinate in the fridge for an hour.

This works equally well for steak, pork, and chicken. Balsamic is one of the weaker vinegars, so you don’t have to fret too much over over-marinating, but given enough time it will break down and eventually toughen the meat.

Rub the meat with all the ingredients. This is more of a wet rub, but it will impart a lot of flavor. Leave the meat in the fridge for half an hour before cooking. If you want to reach more meat faster, go ahead and add some olive oil to the mix (along with more of everything else), which will allow for a more traditional, liquid marinade.

If you allow yogurt, this is a great marinade for chicken. Just give yourself plenty of time to let the flavors set.

Mix the ingredients together, leaving the salt and pepper aside. Salt and pepper the chicken, then coat liberally with the yogurt mixture. Marinade for at least half a day, or overnight.

You can certainly marinate an entire lamb roast, but you’ll want to at least butterfly the leg to get more surface area for the marinade to reach.

Mix everything together in a pan. Coat the lamb on all sides with the mixture, then place into the fridge to marinate overnight. Let it go for at least twelve hours, after which you can just pop the pan into the oven to cook. When it’s done, reduce the drippings/marinade over low heat until it’s a thick, creamy sauce. 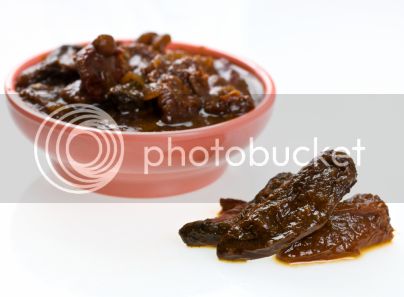 This one’s really, really easy. It goes best with chicken or pork, but any meat should work well.

One can chipotle peppers (with adobo sauce)

Skim the sauce from the can and cover your meat of choice. Marinate for two hours. Include the peppers if you’re brave.

This will go well with any lamb cut, especially the cheaper ones like shoulder (which, as a bonus, also happens to be extra fatty).

Mix the ingredients together. Salt and pepper the lamb, then slather the mixture all over it. Place in a bag or in plastic wrap inside the fridge for at least two hours.

This one’s pretty similar to the earlier example, but with some added flavors. Goes well with lamb, too.

Although summer’s over, this marinade is a great excuse to get out and grill. Just bring an umbrella.

Salt and pepper your chicken and fire up the grill. Mix all other ingredients together and coat the bird. Let it marinate for forty five minutes while the coals heat up, then slap it on the grill.

We say pork chop because it’s ideal, but any pork cut will do: loin, butt, belly.

Mix everything together and coat your pig in the stuff. This is a pretty potent marinade, so you only need to marinate for about half an hour. You can go up to an hour at a time, if you like.

Well, we hope those marinades work out for you. Feel free to hit us up in the comment boards with more – we’re always eager to try our readers’ concoctions.