How to Have a Civil Discussion About Divisive Issues 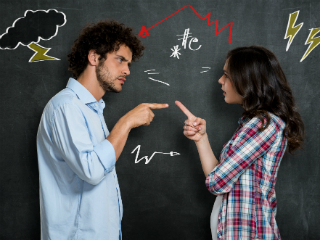 I made the decision long ago to slash my media intake, and I’ve never looked back. It’s not that I abstain entirely. Since my chosen professional and family obligations meant I never had a ton of time for it to begin with, I simply became much more selective. In particular, I had no patience for the irate, drama-inducing screaming matches that had begun taking over the airwaves. For years now people have bemoaned the coarsening of public discourse (and with it, general behavior), and experts have been analyzing its cause. Jonathan Haidt in his book, The Righteous Mind, is a clear example. How did we come to a place of perpetual mouth foaming? While I won’t delve into that particular swamp, I will take up the flip side of that coin today, which has been on my mind lately (maybe on many people’s minds). What primal principles can help us remember how to have a civil discussion about divisive issues?

Sure, vitriol isn’t a new phenomenon. Human history is riddled with grave examples of hateful speech and its consequences. Still, it’s interesting to hear fuming behavior described as “caveman” or “uncivilized.” Is this a fair way to look at it? Were Grok and his kin really rock-throwing brutes, or would they likely show up us “moderns” in their adherence to relative order and harmony? In other words, how much is civility really dependent upon civilization?

What would Grok really do in the midst of dissension? From what we can ascertain, there was likely more inter-band flux than there was intra-band fighting. If you weren’t happy with how things were going in one group, you had the choice of moving to another. But if the problem was your own hotheadedness, you’d likely be called to account at some point. When daily survival was at stake, disunity wasn’t a workable option.

As a result, bands lived elaborate codes that prioritized the harmony of the group. Social structure was egalitarian. Conflict was settled within the group with a mind toward traditional order, historical precedent and cultural/cosmological principle.

Among the in-depth observations of recent historical hunter-gatherer groups, it’s been noted that such egalitarian groups took great time in making decisions that might raise conflict or otherwise divide the group. The process by which a decision was made was treated as more important than the ultimate decision itself. Members casually mentioned personal impressions with no immediate response rather than wrangle ad nauseam over their insisted beliefs.

It’s an intriguing model for considering everything from assessing leadership to deciding life changes, from discussing health issues to fielding criticisms of our Primal choices.

With this model in mind, let’s lay out some principles for civil conversation.

Tune out the extraneous emotion

The old, milquetoast proposal, “Why don’t we all just calm down?” might seem like a tricky suggestion when divisive issues are on the table, but behavioral studies suggest present moment anger can exacerbate our perceived polarization of viewpoints. Anger feeds division—probably not a crazy claim, given its power in battle cries across all centuries and regions.

Ask what mindset and emotion you’re bringing to a discussion, and be aware of what others seem to bring to it. Know there’s a time and place, and that means not when folks are whipped up about any manner of issues.

Assess the importance of proving your point

We’re not talking here about following what you believe—we’re talking about making other people buy into it, too. Are you really so committed to convincing everyone that grains are unhealthy that you’ll sacrifice relationships within your family to do it?

Do we really need everyone around us to be of the same mind on any given issue, including primal health? Can we learn to stand in our own beliefs without demanding others change for us or even understand why we think what we do? In all but the most dire and direct survival circumstances, Grok would’ve put group unity above personal agenda.

Speak solely for yourself

We all remember at some point hearing about “I statements”—ways of phrasing our opinions as our personal beliefs rather than universal truths. If you tell friends at dinner that their thick-soled or heeled shoes are ruining their postural alignment, that’s different than sharing how wearing minimalist footwear has made a difference in your back pain and racquetball game. (You’ll also probably have a better time that night and get invited again next time.)

Likewise, drop any group identification, which only fans the flames of outrage. Accept that this discussion is about the other person(s) present, and that’s it. When we converse as individuals, we can still relate as people. When we converse as representatives of groups, it’s all too easy to dehumanize the other.

Make a personal commitment to equanimity

Research demonstrates that even when we acknowledge a degree of uncertainty about a belief or choice, we are likely to lock into our position if we feel emotionally threatened by the attitude of the other.

People don’t respond well to dominance or threat, and some people have a hair trigger for these perceptions. (I’m sure we all can identify some of these people now.) If your agenda is to make someone angry or defensive, then by all means come off subtly or overtly as threatening their intelligence, intentions or integrity.

If, however, you want to actually be heard, commit to keeping your cool regardless of their mood. There’s nothing more powerful than disarming a person’s hostility with your own self-possessed example.

When appropriate, appeal to sadness and tragedy

Researchers have affirmed what I think we all can intuit—tragedy brings us together, and sadness encourages mutual identification, problem-solving and support. It’s important to note that the crux of this appeal is shared feeling—not directed blame. Whether you’re talking about health issues, family conflict or social concerns, focus on what happened and what positive steps can prevent additional hurt, damage or loss.

Give the conversation space

Hunter-gatherers weren’t in the big fat hurry we all are today. As in the aforementioned decision-making example, they knew how to exercise patience. Learn to see persuasion as a gradual, dynamic, interactive process rather than single-session business.

Reframe your agenda as sharing your experience and planting a seed in the other person’s psyche. Persuasion isn’t equivalent to submission.

Let your life be your statement

You can’t really talk about discussing divisive issues without hitting up against the question, “Does it really help to even discuss it at all?”

Sometimes we don’t have a choice. We’re navigating a work or family issue that can’t be swept under the rug. Other times, however, it’s a subject we can realistically let go.

Even (and maybe especially) if you consider yourself a lifelong debater or activist, ask yourself how much time and energy you are willing to give a particular conversation. Base this assessment on the likelihood that you’ll get what you’re gunning for. (And then ask if getting that will result in any real gain or if it’s more an exercise in control.)

The thing with time and energy is this: you don’t get them back. Sure, there’s another hour and eventually another surge of stamina—but not the ones you’ve already given away.

It may be my later years talking here, but I tend to think people often do well by conserving their time and energy more for their own commitments than they do surrendering them to move other people in their direction. Not only do you enjoy the chance to actually accomplish something tangible with that parcel of time and energy, but you’ve also preserved something of your own peace and sanity by forgoing the Sturm and Drang of conflict.

At issue here is the thoughtful—and increasingly rare—distinguishing between effective persuasion toward a measurable and meaningful result and indulging in high emotion for its own sake.

When we focus too much on other people and demand their adherence, action or even understanding as a condition for our own happiness, we’ve set ourselves up for misery and disappointment. Why impose that on ourselves?

The most civil thing we can do—for ourselves and others—is often to discern what needs to be addressed and what doesn’t. There’s an essential humility and perhaps primal astuteness in learning to be selective. Our ancestors had a better understanding of what was worth getting one’s dander up about because there was less room for ire (and error) in their world. Perhaps if we redefine our priorities today, we might find the same for ours.

Thanks for reading today, everyone. I’d love to hear your thoughts on keeping discussions civil even around thorny issues. Have a great end to your week.