Dear Mark: How to Give a Baby Probiotics, and Pre- and Post-Meal Exercise 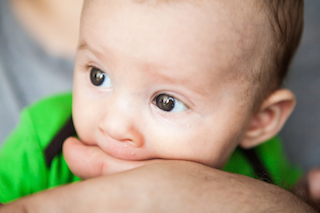 For today’s edition of Dear Mark, we’ve got a two-parter. First, in light of the recent paper showing that Lactobacillus rhamnosus probiotics given during the first six months of life protects against the development of conditions like ADHD and Asperger’s by age 13, how do you actually give the probiotics to a breastfed baby? It’s pretty easy, as you’ll find. And then, given that acute exercise performed before or after meals seems to change the metabolic response to those meals, would I recommend actually working out every time a person eats? It sounds a little excessive, but it might actually be a good move with some positive effects for people who have trouble with insulin and glucose issues.

I saw this from the blog:

“Infants who received the probiotic Lactobacillus rhamnosus for the first six months of life went on to develop zero neuropsychiatric disorders by age 13. Among 13 year olds who didn’t get the probiotic as infants, 17.1% had developed ADHD or Asperger Syndrome.”

Can you please talk more about this? I am confused how to supplement. My baby is due on Friday, and I have been told exclusively breastfeeding for the first six months is ideal, but my family has a huge history of ADHD and if it could be avoided with baby, that would be ballin’.

Kat, you and your impending baby sound like the perfect candidates for a little L. rhamnosus experimentation. Actually, you can start by taking the supplement yourself. The protocol for other studies showing various benefits (to eczema or atopy) for L. rhamnosus in babies include breastfed infants. For those guys, the mom takes the probiotics for six months in addition to the baby, who continues to take it until age two. Probiotics don’t seem to interfere with breastfeeding (and vice versa).

Do the probiotics you take make it into your breastmilk and into your baby? Maybe not. But a recent mouse study found that maternal supplementation of L. rhamnosus during lactation altered not the microbiota of the milk, but the microbiota of the mammary glands. This suggests that maternal probiotics have the potential to improve the health of the mammary glands and the immune health of the infants, without the need for probiotics in the actual milk.

The study you’re referring to did things differently: babies received the supplements for the first six months of life only. As I don’t have access to the full study, there’s no word on administration method, if the babies were breastfed, nor if the mothers also took it. I can’t imagine the fact that you’re planning to breastfeed will change anything, or nullify the probiotic’s effects.

Well, if you’re pumping and bottle feeding, you can just add a little L. rhamnosus powder to the breastmilk after it’s been warmed up. Avoid heating the milk with the probiotic already added, as this may damage the bacteria. This one should be the same strain used in the original ADHD/Asperger’s study. This one is for adults.

If you’re still breastfeeding, dip your finger in the powder and let your baby suck it off. At that stage in the game, they’ll suck on anything entering their oral vicinity. Alternatively, you can add a bit to whatever food you’re weaning them onto. The only problem is that few if any L. rhamnosus powder supplements are available and made exclusively for infants. I’m sure they’re coming, though.

My suggested move if you can’t find a good L. rhamnosus probiotic? How about some food? Give a little kefir. Kefir is full of L. rhamnosus, plus a dozen other strains  Drink that as you nurse and introduce very small amounts to your baby, a finger at a time. By the time they’re weaning, you can give watered-down teaspoons and tablespoons and, eventually, small cups. Introduce very slowly. If your baby has an adverse response to your milk after you start drinking kefir, hold off and go more slowly.

As for safety, it appears to be pretty safe. Over a 12 year period, 644 preterm infants were supplemented with L. rhamnosus with zero adverse effects. And those are premies, who are more susceptible in general. A healthy term baby will have even less of a chance of a negative reaction.

You’ve mentioned a few times that emptying glucose reserves with intense exercise before a heavy carb load can help shuttle glucose directly to muscles (rather than fat storage). That got me thinking. Would it make sense to do a quick workout before EVERY meal (or at least occasionally before meals)? I’m thinking a quick set of pushups or air squats. Would that decrease the chance of fat storage before chowing down?

Thank you as always!

That might seem like overkill to some people, but honestly? There’s not much of a downside to doing that, and a whole lot of upside.

It would emulate the activity patterns of healthy pre-industrial peoples (whether paleolithic or modern hunter-gatherers, or traditional agricultural communities) who have to “earn” their food, either by hunting, gathering, walking to, or growing and harvesting it themselves. Most people reading this blog post aren’t moving constantly. We’re sitting (or standing) in the same general vicinity for hours on end. Many of us are wedded to our computers for work. We just don’t have the opportunity for movement that our ancestors did. And yes: lots of studies indicate that just setting aside a single block of 30-45 minutes for exercise, while beneficial, doesn’t counteract all the downsides of sedentary life.

I’d argue that doing some light (or even brief and intense) exercise before or after every meal would really improve how you partition the nutrients. More into muscle glycogen, less into fat stores, effectively “hacking” an ancestral pattern.

Walking has a ton of support:

From looking at the evidence, it’s clear that any kind of physical activity performed prior to or after meals will help mitigate any negative metabolic effects of the meals. Some may work better than others, but anything should help:

Get creative. Just move! Get out of breath, get warm (on the verge of sweating), feel your muscles burn a little bit. It’ll all work.

If you can swing it without driving yourself crazy, go for it! I’d really be curious to see how it works. Maybe a trial run of two to three weeks, tracking body composition, weight, and performance.

Doing this, you might eliminate the need to go to the gym altogether. I’ve done a modified version of this before, peppering my day with short bursts of lifting or sprints or walks for weeks at a time. It worked okay for me, but I’m a gym guy — and probably always will be — so I prefer getting those dedicated workouts. But I absolutely felt “on” all the time when I was on the “workout snack” schedule, like I could go for a game of Ultimate or a long hike or a set of sprints at a moment’s notice. If you work in some resistance training to your pre-meal workout snacks, I think you could get away with it and get pretty fit and strong in the process.

Let me know how it works!