How to Exercise with An Autoimmune Condition 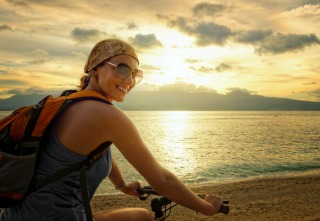 Autoimmune diseases really throw the body for a loop. You’re attacking your own tissues. Your inflammation is sky high. What’s usually good for you—like boosting the immune system—can make it worse. You’ll often restrict eating certain foods that, on paper, appear healthy and nutrient-dense. You take nothing for granted, measure and consider everything before eating or doing it. Sometimes it feels like almost everything has the potential to be a trigger.

Is it true for exercise, too? Must people with autoimmune diseases also change how they train?

First things first, exercise can help. You just have to do it right, or risk incurring the negative effects.

Don’t overtrain. Most autoimmune diseases are characterized by chronic inflammation. Anything that increases that inflammatory load, like too much exercise, will contribute. Overtraining—stressful exercise that you fail to recover from before exercising again—will increase your stress load and increase autoimmune symptoms.

Yet not exercising might be even worse because exercise increases endorphins. Most think of endorphins purely as “feel-good” chemicals. They’re what the body pumps out to deal with pain, as a response to exercise, and it’s through the endorphin receptor system that exogenous opiates work. Endorphins also play an important role in immune function. Rather than “boost” or “diminish” it, endorphins regulate immunity. They keep it running smoothly. Without endorphins, the immune system begins misbehaving. Sound familiar?

Low-dose naltrexone is a promising therapy for multiple sclerosis and other autoimmune diseases. It works by increasing endorphin secretion, which in turn helps regulate the immune system’s misbehavior. I won’t posit that exercise is just as effective as LDN, but it’s certainly a piece of the puzzle.

This is the same relationship everyone has with exercise. Too much is bad, too little is bad, recovery is required, and intensity must be balanced with volume. The margin of error is just smaller when you have an autoimmune disease.

How should you exercise, then?

It depends on what type of autoimmune condition you have. Let’s explore some of the more common ones.

Rheumatoid arthritis hurts. It makes exercise a daunting prospect, which is why so many people with RA choose to stay inactive. Yet exercise consistently helps.

Exercise may improve sleep, reduce depression, and improve functionality in RA patients. Animal models of RA suggest that acute exercise inhibits the destruction of and even thickens cartilage.

Yoga works. A survey of RA patients found that many benefit from regular yoga practice. Another study found that it reduced pain, improved function, and increased general well-being in RA patients.

Light and very light intensity works. One study found that around 5 hours of “light and very light” intensity activity each day were often more effective at improving cardiovascular health in RA patients than 35 minutes of moderate intensity training each day. This isn’t necessarily unique to RA, as I think everyone’s better off walking and moving for 5 hours versus jogging for 30.

Working the afflicted joints works. For RA patients with hand and finger joint pain, a high-intensity exercise program centered on the hands improved functionality more than a low-intensity one.

High intensity works. 4 4-minute-long high intensity intervals on the bike at 85-95% of max HR increased muscle mass and cardio fitness while beginning to reduce inflammatory markers in women with RA. Notably, neither pain nor disease severity increased. In another study, RA patients were able to perform high-intensity resistance and aerobic training without issue.

As with RA, people with multiple sclerosis really seem to benefit from exercise. They sleep better. If you start early, it may reduce the risk of developing MS. Exercise even drives brain-derived neurotrophic factor (BDNF), which is reduced in MS.

Lifting in the morning works. A recent study found that MS patients had more muscle fatigue and less muscle strength in the afternoon compared to the morning. Muscle oxidative capacity—the ability to burn fat during low level activity—did not differ between times.

Intense exercise works: The greater the intensity, the more BDNF you produce. That’s a general rule for everyone, and it’s no different for MS.

In Crohn’s, the body attacks the GI tract. It’s a bad one. Because Crohn’s can involve crippling GI pain, impaired digestion, fatigue, joint pain, and emergency diarrhea, patients often avoid exercise. They shouldn’t. If you can get past the mental roadblocks Crohn’s erects, exercise can really help.

Resistance training and aerobic activity both work. Either alone or both in concert improve Crohn’s symptoms by modulating immune function.

People often forget about type 1 diabetes, but it’s an established autoimmune disease where the immune system attacks the pancreas and reduces or abolishes its ability to produce insulin. For type 1 diabetics who wish to reduce the amount of insulin they inject, exercise is essential.

It up-regulates insulin independent glucose uptake by the muscles. That removes the pancreas from the equation altogether, and it reduces the amount of exogenous insulin needed to process glucose.

It’s also safe, as long as you have your insulin therapy under control.

However, as high-intensity exercise tends to increase blood glucose and easy aerobic exercise decreases it in type 1 diabetics, you really need to have your ducks in a row. The Lancet Diabetes and Endocrinology journal recently published their consensus guidelines for safe exercise with type 1 diabetes, with the main takeaway being that diabetics should monitor their glucose levels before, during, and after training to ensure the numbers don’t get away from them. One study found that quickly giving a dose of insulin following high-intensity training counteracted the rise in blood glucose.

Combining resistance training with aerobic training works. The combination lowered insulin requirements and improved basically every marker of fitness, along with general well-being.

Those are four of the most common and well-studied autoimmune diseases. Others may not have the same rich body of literature, but exercise probably helps there, too.

Be careful with Graves disease, though.

In 2012, a Graves patient ended up with rhabdomyolysis (a terrible condition where you break down and pee out muscle tissue) after a non-strenuous exercise session.

Again in 2012, another patient with Graves got rhabdomyolysis after a session.

Again, be careful with Graves.

Because they’re so trepidatious about it and inactivity numbers are higher than the general population, most autoimmune disease patients would be better served with more exercise, not less. Autoimmune disease patients who loyally read MDA and other ancestral health blogs, however, might be the type to engage in CrossFit WODs and train really hard and rather excessively. If so, you might need less exercise, not more.

As I read the literature, autoimmune disease patients should be exercising in accordance with Primal Blueprint Fitness, albeit even more strictly:

Lift heavy and go intense, but keep it really brief. Low-volume, high-intensity. Short sprints, 3-5 rep sets, that sorta thing. Intensity is relative, so don’t think you have to squat your own bodyweight right away.

Spend most of your training currency on long, slow movements. Hikes, walks, gardening, gentle movement routines are your best friends. Basically anyone with an autoimmune disease can do these activities, and they always help.

Mobility training is required, especially in autoimmune diseases that affect the joints and connective tissues. If your joints are compromised, your other tissues have to be that much more limber, loose, and mobile. Try for something like VitaMoves or MobilityWOD.

Having an autoimmune disease doesn’t make you fragile. You can still train, and evidence shows that you can probably go harder than you think—provided you allow for ample recovery and keep a lid on how much training volume you accumulate.

Anyway, that’s my take on all this. I don’t have an autoimmune disease, though, so I’m only going on what the literature says. I’d love to hear from people who deal with autoimmune disease on a personal level. How do you exercise? What works? What doesn’t? What have you learned along the way?