How to Build Strength and Muscle with Progressive Calisthenics 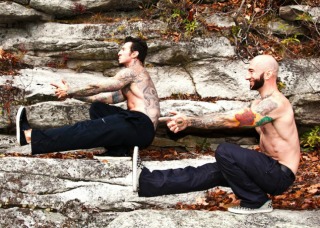 Today’s guest post is offered up by some long-time friends of MDA, Al Kavadlo and Danny Kavadlo. I’m excited to share their expertise with the Primal community here. This year I wrote the foreword for their new book, Get Strong, which was just released.

If you’re into Primal living, chances are you’re a minimalist when it comes to exercise. In our busy world, we all want to make good use of the time we allot to our training. Additionally, we Primal devotees know that many of the fancy machines we may encounter at the local globo-gym are not needed for building real-world strength.

As Mark Sisson accurately says, you need to “lift heavy things” in order to get strong, but there is no need to overcomplicate the issue. Barbells, kettlebells and dumbbells are viable options, but you can keep it even simpler than that and still get very strong. Yes, you need to push your muscles with resistance training in order to affect growth in them, but your own body weight provides all the resistance you’ll ever need. You don’t have to rely on external weights in order to build strength and muscle. Calisthenics exercises generally require nothing more than the floor beneath your feet, a wall, a bench or a bar. Sometimes it seems too simple to be true, but I assure you that one can get extremely strong with nothing but bodyweight training.

Many believe that once you hit double-digit numbers on exercises like push-ups and pull-ups, an external load must be added in order to continue building strength and muscle. This is simply not true. If you know how to manipulate leverage, there is no need to ever add weights to your workouts. Once you understand the underlying principles behind progressive calisthenics, you can build a lifetime of strength with nothing more than your own body weight.

Here are three simple ways you can vary the intensity of any calisthenics exercise without adding weight or requiring the use of a gym.

By adjusting the distribution of your bodyweight, you can increase or decrease the resistance on many calisthenics exercises. To illustrate this, compare a push-up with your feet on an elevated surface to a push-up with all your limbs on the ground. Due to the change in leverage, there is much more weight in the chest, arms and shoulders in the former than in the latter, rendering it more difficult. Conversely, a push-up with the hands elevated (instead of the feet) will place less demand on the muscles of the upper body, making the exercise better suited to beginners. 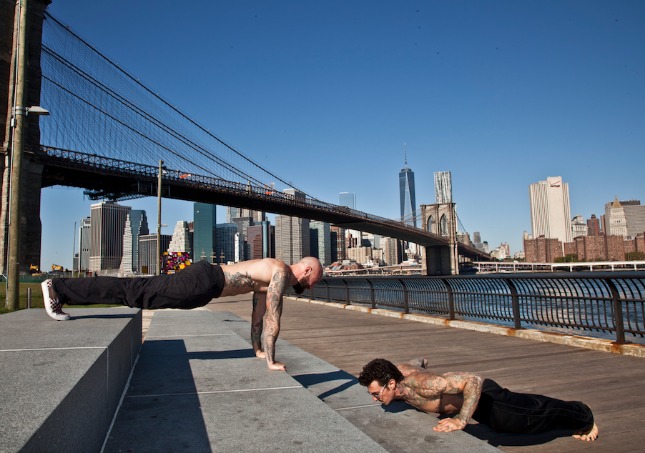 Furthermore, you can take this principle to the next level when you remove a contact point entirely: A one-legged squat will always require more strength than a squat performed on both legs. By completely eliminating one point of contact, you’ve doubled the weight loaded onto the individual leg. Fortunately, there are many steps in between the two, such as split squats and other asymmetrical squat variations.

2. Alter the Range of Motion

Additionally, you can regress a movement pattern by using only part of the standard range of motion. For example, practicing the negative phase of a pull-up as a progression toward full pull-ups, or doing half-squats until you are able to perform the entire range of motion.

3. Give Yourself an Assist

There are several ways that you can use the principle of self-assistance as a gateway toward more advanced bodyweight exercises. In the case of the one-legged squat, this is often done by sitting back onto a bench, as doing so provides balance and stability in the bottom position, which is one of the most difficult aspects of the exercise. 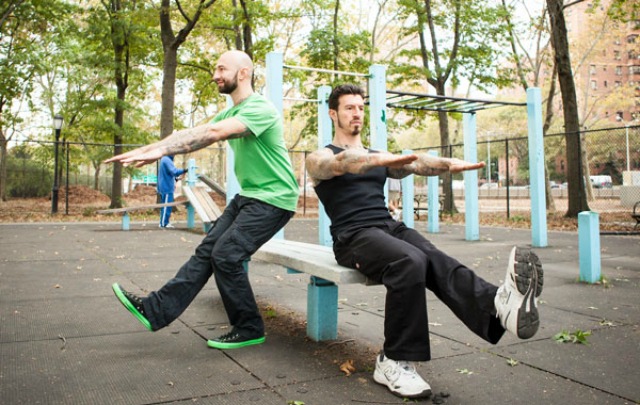 A self-assist can also be provided from the legs when working certain upper-body movements. If you aren’t strong enough to do a pull-up yet, you can keep one foot on a chair or platform to assist your arms. Put as much of your weight as possible in your arms and use your foot to make up the difference.

Here are a few additional exercises that employ these three principles, which you can begin implementing in your training today—if you’re ready for them! 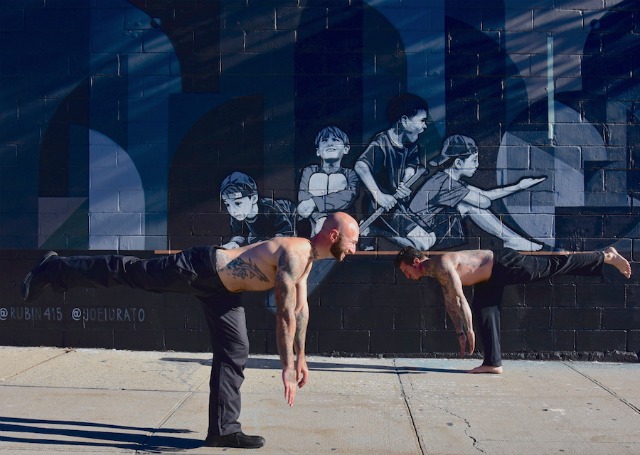 This is like a straight-leg deadlift performed on only one leg. It’s a great example of altering the weight-to-limb ratio by removing a contact point. Like the single-leg squat, taking one of your legs out of the equation doubles the amount of work performed on the primary leg. Furthermore, a major balance and stability component is added to what would otherwise be only a pure strength exercise. That’s why the drinking bird is surprisingly difficult even with just your bodyweight.

Begin by standing on one foot with your opposite leg hovering just above the ground behind you. From here, lean your upper body forward, bending from your hips and reaching your opposite leg out behind your body. This will not only help you balance, it will also further engage your lower back as well as the leg that’s in the air.

Watch out that you don’t bend your spine on the way down, but rather take the stretch in your hamstrings. The idea is to keep your back flat and pivot from the hips. 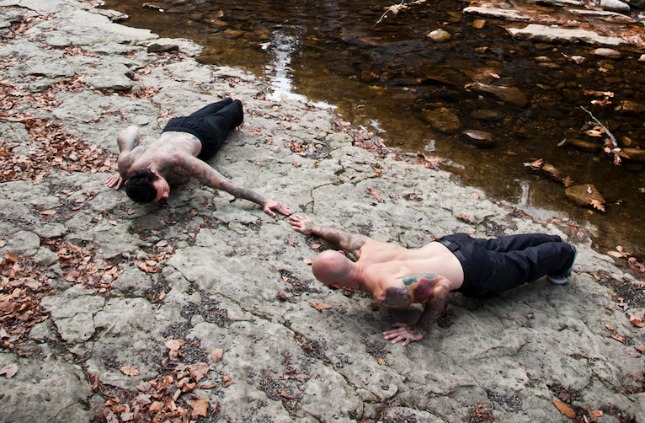 This advanced push-up variation is an excellent example of how you can change the weight-to-limb ratio in order to progress an exercise. Begin in a push-up position with a very wide hand placement. From there, keep one arm straight while you bend the other, so your body slides toward the side of the arm that bends. Most of your weight will wind up in the bent arm, making the move substantially harder than a standard push-up.

If you’re unable to perform a full archer push-up, you can start with your hands a bit closer and allow your straight arm to have a small bend in the elbow in order to make the move more manageable. In time, aim to eliminate that bend. Play around with gradually moving your arms farther out to allow for a full range of motion.

The archer push-up is also an example of a self-assist, as it can be used as a progression toward a one-arm push-up. In this case, you can think of it as a regressed one-arm push-up with the secondary arm acting as a kickstand to help provide stability to the rest of the body. 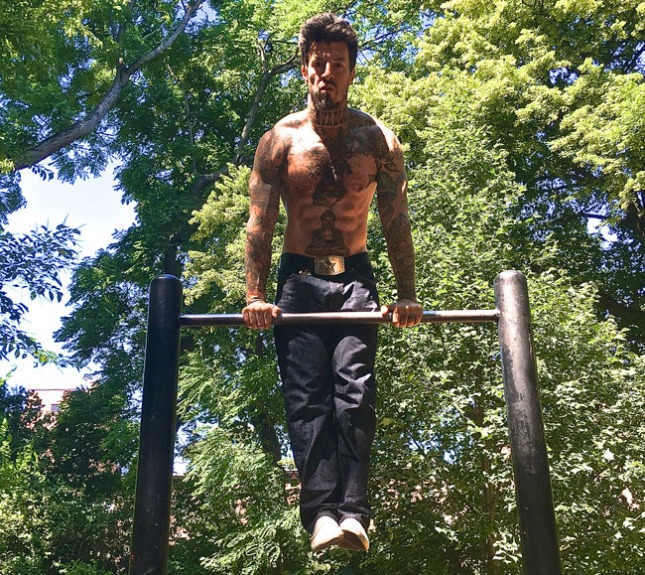 The muscle-up begins like a pull-up, but keeps going until your entire torso winds up above the bar. Grip the bar slightly narrower than you would for a pull-up, then lean back and pull the bar down your body as low as possible. At the top of your pull, reach your chest over the bar and extend your arms.

Though you can think of the muscle-up like a pull-up with a much bigger range of motion, the two movement patterns are subtly different. When you do a muscle-up, you’ll be driving your elbows behind your body, rather than toward your sides as you would in a standard pull-up. This is why a narrower grip tends to work better for the muscle-up. It’s also helpful to think about leaning away from the bar during the pulling phase before pitching forward at the top. This creates a movement pattern that’s more of an “S” shape than a straight line, allowing you to better maneuver your body around the bar. When starting out, we encourage you to use momentum and be explosive. It may take a lot of practice to get a feel for the timing, though if you are solid on your pull-ups, and diligent in your pursuit, the muscle-up will eventually be yours. 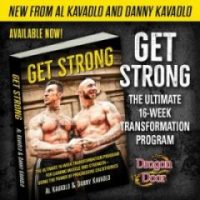 For more information on building strength and muscle with bodyweight training, pick up a copy of Al and Danny Kavadlo’s newly released book, Get Strong.

I want to thank Al and Danny Kavadlo for their guest post and the great suggestions today. And thanks to everyone for stopping by the blog. Have questions or thoughts on using progressive calisthenics for your Primal fitness routine? Share them on the comment board. Have a great week.