How to Augment and Support Your Natural Detox Capacities 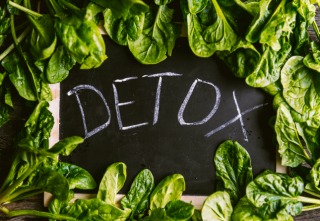 Conventional wisdom has decreed that “detox” is a myth. They’re not even sure if toxins even exist, as far as I can tell. On the other side, you’ve got detox gurus prescribing cayenne-maple-lemon tea and glasses full of charcoal water as cures for essentially everything. Where’s the truth lie?

First, detoxification does exist. It’s an established concept, after all, with its very own spot in the dictionary. When we come into contact with toxins—compounds that pose a threat to our healthy homeostasis—we must remove or nullify them. That’s detoxification.

Popular conceptions of how detox works, however, are inaccurate. Both sides are wrong. Both sides are flailing around a false narrative. The conventional side, the skeptics, are attacking a straw-man—that our bodies are passive recipients of toxicity, the damsel tied to the tracks awaiting the oncoming toxin train, and only this special proprietary blend of herbs and spices can sever the bonds. The detox fanatics, meanwhile, overstate their case, with frequent references to “flushing” and “die-off.” They seem to think that detox is about using outside agents to impose order on the body from the top down.

In reality, the body comes equipped with detoxification capabilities. We use the liver, kidneys, and various endogenous antioxidants to remove and/or nullify dangerous compounds that enter the body. And we can improve the functioning of those capacities, either by actively supporting them with necessary precursors or by getting out of their way.

Applying heat “just feels good,” they say. Saunas are a placebo, they say. There’s no evidence they actually help you detox anything, they say. It’s an indulgence we’re attempting to justify, they say. And you’re certainly not sweating out any toxins.

Exposure to extreme heat increases something called heat shock proteins, or HSPs. HSPs have a range of beneficial hormetic effects on our detoxification capacity. They trigger compensatory adaptations and activate antioxidant defenses in the blood of healthy volunteers. They even increase regeneration of the body’s main detoxifying organ—the liver—after it’s been damaged.

As for that sweating claim, sweat contains contains bioaccumulated toxins. BPA shows up in sweat, for example, even when it doesn’t show up in the blood or urine. Sweat also contains certain phthalate compounds and their metabolites, none of which we want. Sweat also contains arsenic and lead in people exposed to high levels of the metals. Sweating may even improve the function of another important detoxification organ—the kidney—by restoring nitrogen excretion in people with kidney disease. In one study, police officers with chronic illnesses caused by exposure to high levels of meth lab chemicals experienced major improvements after sauna therapy.

Coffee is consistently linked to lower rates of type 2 diabetes, which many researchers suggest begins with damage to the liver. More recently, coffee was shown to undo alcohol-related liver damage. And high coffee consumption appears to protect against liver cancer by reducing liver damage. A damaged liver cannot perform its designated functions as well as it should. A damaged liver cannot process, metabolize, and render inert the toxins it’s supposed to be handling.

Make sure you drink it, though. Resist that strange compulsion so many have to shoot it up your colon.

We all know crucifers like broccoli, cabbage, Brussels sprouts, and cauliflower are “good for us,” but why? One big reason is that they’re good sources of sulforaphane, a potent activator of a little-known, but extremely important antioxidant called quinone reductase. Quinone reductase protects cells from carcinogenic or toxic insults, and it also helps conduct the activity of glutathione.

Dr. Rhonda Patrick recommends broccoli sprouts, which have up to 100 times the sulforaphane of mature broccoli. A daily broccoli sprout drink was able to quickly and sustainably nullify airborne pollutant-derived oxidative stress in a group of Chinese adults.

Glycine, the primary amino acid in collagen, is essential for detoxifying methionine, an amino acid found primarily in muscle meat and eggs. The more meat/eggs you eat, the more collagen you need to replenish.

That means eating collagenous material like cartilage, gristle, and bone broth, or eating dedicated collagen supplements. (I’ve made this a daily priority for myself for quite a while now, and I try to make it easier for others to implement in their diet.)

It’s extremely similar to how detox gurus talk about magical detox protocols, except it actually works. One recent study that actually sought out to disprove the chelating effects of EDTA ended up getting a massively positive result. There’s even evidence that EDTA chelation can protect against other diseases, like heart disease.

Glutathione is the master antioxidant. It plays a role in the detoxification of most every toxin that enters your body, from alcohol to BPA to airborne pollutants.

Fortunately, there are many ways to support your glutathione status:

Cytochrome p450 is a class of enzymes that, among other tasks, detoxifies incoming drugs and carcinogens. As with glutathione and the other antioxidants, cytochrome p450 responds to certain dietary components.

Dietary flavonoids—plant phytochemicals found in foods like chocolate, red wine, tea, berries, and pretty much everything—can also alter cytochrome p450 activity. Some will raise it, some will lower it, but the important thing is that flavonoids in general have a positive effect. Just eat a wide variety of whole foods and you’ll come out ahead.

The liver is a chemical processing plant. If something’s being detoxified in your body, the liver is probably involved. There are several things you can do to keep the liver healthy:

The kidneys excrete many of the toxins you accumulate.

Protein gets a bad rap when it comes to kidney health, but the real culprit appears to be sugar, particularly fructose. Compared to glucose, it has a far more adverse effect on the kidneys. Metabolic syndrome also usually precedes kidney failure.

If you have bad kidney function already, limit protein intake until it’s back on track. But rest assured that even high protein intakes pose no real threat to healthy kidneys.

Having good gut health is paramount for detoxification. For one, a leaky gut allows unwanted compounds into circulation to disturb homeostasis. Those are toxins. It may not be the kind of “toxin” most people think of when they hear the word “detox,” but bacterial endotoxin, allergenic proteins, and other irritants that take advantage of a leaky gut wall can do serious damage. To boot, gut bacteria modulate xenobiotic metabolism.

As you can see, there’s nothing magical about detoxification. You’re not introducing some super food that hones in on and eradicates the toxins coursing through your blood. You aren’t physically flushing them out from your colon. There’s no brute force involved. You’re simply supporting and, in some cases, augmenting the natural detoxification pathways human bodies have been using for hundreds of thousands of years.

This also means that detoxification is an ongoing process. It’s not a one-and-done deal. You don’t “do a cleanse” every fortnight and forget about it until the next. You have to maintain and be consistent.

What say you, readers? What do you think of my take on “detox”? As always, I’m sure I’ll have pissed off people from both sides of the argument. I wouldn’t have it any other way. It’s how good conversation gets started.

More importantly, what are you taking from this post? What will you change—or make sure to maintain—about your lifestyle?

If I missed anything, please let me know. What are some other legitimate ways to augment one’s detoxification ability? 20 More Questions about the Benefits of Collagen Supplements