How Should We Harness Behavioral Economics for Better Health? 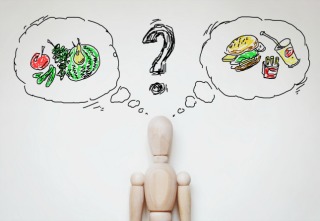 As much as humans think they’re objective beings whose every decision emerges from cold logical calculation, we’re just irrational, emotional animals. That’s why stories and anecdotes are more convincing than facts, why people fear losing money twice as much as they enjoy making it, and why the guy making $100k per year feels poor if his neighbors make twice that. This kind of phenomenon is best explained by behavioral economics, a method of economic inquiry that uses psychological, emotional, cognitive, and social factors to explain why we make the often-irrational financial choices we do. And it has some interesting applications for health….

People are more likely to make a decision when given fewer options. Too many options make decision-making harder, as anyone who’s spent two hours reading hand blender reviews on Amazon before giving up and ordering nothing can tell you.

While we wait for the experts and authorities to fine-tune their benevolent social nudges, how can we take advantage of behavioral economics for our own health?

People hate losing money. Future rewards are just that: in the future. They’re abstractions. Forking over money, placing your own hard-earned cash in limbo while you succeed or fail is very real. You had money, then it went away. That’s happening in the present moment, and you feel it—rather poignantly. As behavioral economics pioneers Kahneman and Tversky said in 1979, “losses loom larger than gains.”

Stickk was created by a behavioral economist who knew the power of loss aversion. With StickK, users interested in accomplishing a goal formally make a commitment to reach that goal by a certain date and put some of their own money on the line to be forfeited if the commitment is not fulfilled. You set the goal, lay out the stakes of your commitment (how much money, if any, will you put on the line, and where will the money go if you fail?), choose a “referee” to track your progress, keep you honest and report your progress to StickK, and choose other StickK users as supporters to cheer you on. Choose a goal template or create your own from scratch. Goals can be ongoing commitments requiring constant check-ins, or one-time things where you either succeed or fail.

Another option is Pavlok, a device created by the guy who paid a woman off Craigslist to slap him across the face each time he stopped focusing on his work. You strap the Pavlok onto your wrist—it looks a lot like a FitBit—and decide on a bad habit you’d like to break or a good one you’d like to establish. Each time you fail to hold your side of the bargain, the Pavlok zaps you with a mild but uncomfortable electric shock. (This option might not be for everyone, but I’d love to hear from those who do try it.)

Shopping for anything when hungry is a bad idea. Studies show that hunger increases the amount we spend, even if we’re shopping for something totally unrelated to food. When you’re hungry, you desire more of everything.

To this, I’d also add the tangentially related “Don’t go out to eat at an expensive sushi restaurant if you’re starving.” There’s no quicker way to run up a bill.

If you must go shopping while hungry, prepare a list beforehand. That list will be your life vest of rationality in the stormy, boiling sea of gurgling stomach juices drifting you toward the snack aisle.

Sink Your Costs in Health

You may have heard of the “sunk cost fallacy”—which describes how people feel compelled to stick with something they’ve already paid for, even if it’s horrible, just to “get their money’s worth.” It usually refers to a negative, harmful behavior.

Sometimes the sunk cost mentality is helpful, though. Wasting 3 hours of your life on an awful movie just bcause you paid $12 is bad. Going to the gym three times a week for a full year because you paid $1000 for the year membership up front is good. Both are sunk costs, but one has a good result. Other examples of positive sunk costs include personal training sessions, massage sessions, expensive exercise equipment (barbells, stationary bikes, kettlebells, etc).

Price matters here. The sunk cost effect will be greater the higher your initial investment. It’s harder to ignore a $1000-a-year membership at the local powerlifting gym than it is to ignore the Planet Fitness package you got for less than $100.

Surround Yourself with People Making the Choices You Want to Make

According to a 2013 study, people tend to converge to the lowest common denominator. Office workers were all given access to treadmill desks, then followed for six months. When people got regular updates about everyone else’s treadmill usage, they used them less, regressed to the lowest common denominator. When people didn’t know how often the others were using the treadmills, usage went up.

Since social media and basic physical proximity make it nearly impossible ot avoid knowing what everyone else is doing, your best bet is to surround yourself with people doing awesome, healthy things on a regular basis. Follow Facebook and Instagram friends with healthy habits. Train at a gym where the other people’s feats inspire you. Make sure the lowest common denominator is higher than most.

When you’re at the grocery store, even a healthy one like Whole Foods, they’re tugging on your emotions and base desires at every turn. I don’t fault them for it. It’s how merchandising works. Just know that’s what you’re walking into, unless you decide not to walk into the store at all.

These days, that’s actually possible. You can order groceries from a place like Thrive (my favorite) or Instacart. Instead of idly browsing through the entire store’s inventory, where you might run into something junky, you search for the exact categories you want, and then you browse. If you don’t want the gluten-free almond flour macaroons you can’t ever walk past, you simply don’t search for them.

In an effort to dissuade cigarette usage, many countries have established laws requiring the use of graphic warning labels that depict potential consequences of long-term smoking, in lurid detail. Does the sight of a cancerous orifice, tracheotomy hole, or dead body make people more likely to try quitting? It appears so. Graphic warning labels correlate with both more attempts to quit and reduced rates of smoking.

This can work for everyday health practices, too. Immerse yourself in graphic, visceral evidence of the worst thing than can happen to you if you don’t lose weight/exercise/do what you need to do.

Prediabetic? Rev up the images of diabetic foot amputations and festering sores.

We stick with the default option more often than not. It’s harder to opt-out than opt-in. Make it so that you have to opt-out of eating right and exercising.

Every Sunday, do meal prep for the rest of the week. Cook up a big batch of something. That way, if you want something unhealthy, you have to “opt-out” of eating the healthy food you already have prepared and ready to go. This also works on smaller scales, such as keeping hard-boiled eggs on hand or chopping veggies and prepping salad makings days in advance.

A few ideas for making exercise and movement the default position:

Eliminate your office chair. Force yourself to stand (or walk).

Keep a kettlebell (or barbell, or dumbbell, or weight vest, or any piece of equipment) right outside your bedroom door. Whenever you wake up, there it is waiting for you.