How Primal (Literally) Saved My Life

I would like to thank Mark Sisson and the Primal lifestyle for saving my life. But before I regale my death-defying experience, I will give a brief overview of my health history – I’m sure many thinking of starting their Primal journey can relate.

Growing up, I was a skinny kid despite my love for junk food. My parents were busy people, and since I couldn’t stomach the bitter vegetables or watery textures of their home cooking, I often ended up eating packaged foods.

As I entered high school, junk food was available at every turn. Combined with the typical teenage appetite, this led to some prodigious hedonistic feats, such as eight donuts in one morning or a whole large pepperoni pizza for dinner. My friends called me the ‘black hole’ because food would disappear without noticeable impact. But as a physician’s check-up confirmed, it did catch up to me – at age 16 I was almost 170 lbs (borderline overweight for my 5’9” frame). I started jogging and trying to eat less according to the doctor’s orders, but this never resulted in any significant weight loss – the hunger was too strong to fight. 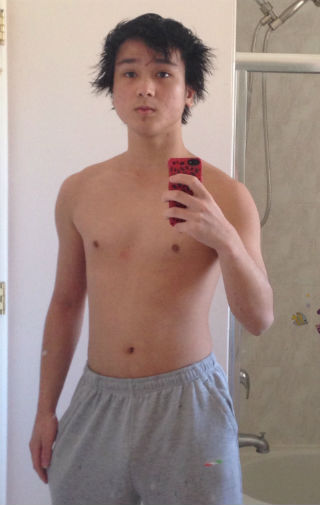 That summer I went on a two week group hiking trip. Though the food wasn’t great (refined grains galore), I lost 15 lbs. I sustained this for the rest of the summer with plenty of jogging, but my junior year of high school ended that. With the high amounts of stress, I turned to junk food and sweets for comfort. I gained back most of the weight I’d lost, eventually re-losing it once school was over through hours daily on the treadmill (my ‘before’ picture is from this time when I was at 155 lbs).

I was tired of struggling to avoid an unhealthy weight and started eating ‘healthy.’ I ditched the junk food for homemade ‘healthy’ whole wheat baked goods, and started doing a few minutes of calisthenics every morning. At first it worked – I lost another 10 lbs. But after a few months, body fat and my appetite started creeping up. A night of binging, in which I downed almost a whole loaf of homemade bread, made me realize my ‘healthy’ diet was unsustainable and needed to change.

I actually transitioned into the Primal lifestyle very intuitively. I realized I didn’t feel so great after eating grains – one whole wheat biscuit would inevitably lead to a second – so I cut them out cold turkey. I began searching questions on the Internet with a renewed interest in my health, and frequently came across Mark’s Daily Apple, which led me to read the site and learn about the full Primal philosophy. 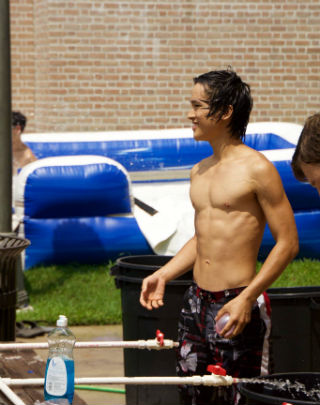 Reading Mark’s writings reinvigorated my efforts to take control of my health. I adopted a fully Primal nutrition plan, started cooking all of my own meals, and approached my daily calisthenics with the intent of getting stronger, rather than just going through the motions. I stayed at/slightly under my prior weight, but was definitely gaining some appreciable muscle mass and definition, something novel to me.

After half a year of Primal living, my skills were put to the test. I was vacationing in Sedona, Arizona, and enjoying daily, steep, several-hour long, shirtless hikes (no, I didn’t burn despite not wearing sunscreen). On one of these, the trail was very poorly marked at the peak. Only after a while of walking down from the summit did I realize I had lost the trail completely! At first I decided to just start heading down the very steep mountain face (the hike up had been 2 miles of switchbacks over ½ a mile as the crow flies) until I hit the flatter lower portions (stupid, I know). This in itself was perilous enough, be it stabilizing myself after sliding on a deceptively secure patch of ground, or avoiding impalement by agave plant or cactus.

To make things worse, I reached a sheer vertical drop and could no longer continue. With sunset soon approaching, no food, and my water supply running low, I couldn’t climb back up to begin searching for the trail again either. Calling for help wasn’t an option due to a lack of cell signal. The stress response started kicking in – my heart raced forcibly and serious fear of not making it off the mountain set in. But then I thought to myself, what would Grok do? Certainly he wouldn’t panic and ball up into a nervous wreck. I needed to analyze my surroundings and act intelligently to make it out.

Comparing the view of the mountains in the distance to that on the way hiking up, and using my map, indicated I was about half a mile off the part of the mountain containing the trail. My only option was to essentially scale along the side of the mountain, pulling myself across near vertical, crumbly, rocky ledges and boulders. After this harrowing effort, the trail was in sight. But there was one last problem – a large thicket of sharp, snappy manzanita stood between me and salvation. I successfully powered through, ignoring the scratches and snagging of the endless branches, and sprinted the rest of the trail to meet my waiting family. I reached them just in time – they had called a park ranger and were just about to call a full search party!

Thanks to my overall vitality from my Primal lifestyle, I escaped a perilous situation with only some scratches to show for it. Had I carried the excess body fat I would have likely had if I hadn’t adopted Primal eating, lacked the strength gained from focus training after reading about the importance of lean mass on MDA, or missed the mental clarity I gained from living Primally, I may have not successfully navigated the desert’s many perilous situations and sustained some serious injuries (or worse).

Since my brush with death in the desert, I’ve continued to live a successful Primal lifestyle even while starting college. Discovering Primal is the best thing that has ever happened to me – my quality of life has improved significantly. Eating is no longer an existential quandary. I used to think I could either have food that tasted good or was healthy for me, but not both. Every meal was a choice between short-term gratification vs long-term self-care – oftentimes I would turn to ‘tasty’ junk food when feeling down on myself and life. Primal eating is the opposite picture – I can eat absolutely delicious food to satiation, and rest assured that it nourishes my body and well-being. Junk food no longer tempts me – fully knowing its negative impacts on my health makes it impossible to ingest in good consciousness, and the over-saturated flavours are off-putting anyways. Instead I am able to appreciate an entire world of flavours bold and subtle that I never even knew existed before. And I’ve become a great cook, able to prepare all my own meals instead of settling for the dry, overcooked (and not to mention gluten, soy, and seed-oil laden) fare at my college cafeteria.

Beyond diet, I’ve had many other improvements. Ailments like relentless acid reflux, odd skin rashes and acne, and crippling seasonal allergies are no more (or at least a faint shadow of what they used to be). My body composition now (exercising no more than 45 minutes a day) is leaps and bounds better than it was when I spent hours on the treadmill. But most of all, I’m better capable of handling life’s ups and downs without succumbing to mental stress. My experience in the desert really put things in perspective – the stress response is for when you are the brink of death, not for when an exam is approaching or the neighbours play loud music late at night. Life is no longer a slog or struggle to get through daily existence as it once was, but a journey to be embraced and cherished.

Thank you Mark and the rest of the Primal Blueprint team for all you’ve done for me and so many others worldwide. In multiple senses I owe my life to your efforts. Grok on!