Thank you so much for being a leader to a better way of life, an example to people like myself, and a genuine life changer. To understand where my gratitude comes from, I have to tell you my story, which began over 10 years ago.

I have Crohn’s Disease, but for the first fifteen years of my life, I had no idea I had it. What I did have was an aching feeling that there was a reason why I had brutal stomachaches nearly every day, why I could eat tons of junk food but never put on weight, and why everything became so much worse when I was stressed. I lived for years without answers, but at fifteen I was finally diagnosed and began a life dependent on medication. My treatment gave me slight relief for a the rest of high school, but every time I experienced stress, my symptoms would rear back up, causing me to leave class and miss important experiences.

The first time Crohn’s sent me to the ER, I was a freshman in college. In rehearsals for my first college play, I began to feel a pain in my abdomen that wouldn’t go away, unlike the cramping that I was used to. After three days in the hospital and receiving heavy doses of antibiotics and steroids, the episode resolved itself. And although I was incredibly weakened by three days of a liquid-only diet, I was still able to perform and return to school, much to my relief.

Little did I know, this episode was only the beginning of my struggle with my health—a struggle that would affect everything in my life. Sure, I had trouble putting on weight and I had the usual array of Crohn’s symptoms, but the real fight was between my disease and my dreams. I constantly wondered, “How am I going to pursue what I’m passionate about? Is Crohn’s really going to dictate how I live and what I can accomplish?”

For the next year or two, I carried on with the same medication (though the dosage sadly increased each year and after each doctor’s visit)…until my last semester of college.

Around New Year’s I began to feel a constant throbbing near my pelvis. My appetite decreased because of it, and I began to lose weight that I couldn’t afford to lose. I was prescribed a new medicine in addition to my original one in order to deal with the apparent inflammation, but it wasn’t enough to take away the crushing pain. For this, I was prescribed hydrocodone, which allowed my exhausted body to slip away into relief for four blissful hours at a time. I also saw a nutritionist, who in classic conventional wisdom, advised me to drink weight-gain “nutritional” supplements like Boost. Only after did I learn (from Mark’s site and books) how much worse this made things. So I dutifully drank them every day. Doped up on hydrocodone, I dealt with the pressures of finishing college, but my hope of graduating magna cum laude was destroyed. 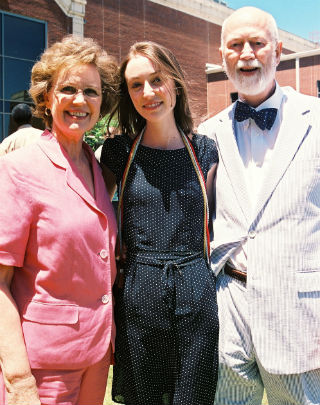 This is me at my college graduation. I was down to pounds and still taking Hydrocodone every four hours to deal with my Crohn’s pain.

In the middle of all of that, my dad was diagnosed with a terminal cancer and given only a couple of months to live. I felt like the world was conspiring against me. I lived in a constant state of pain and depression, and when I should have been there to give comfort to my father, I was only a shadow of myself—frail, broken, and unsure of how to be strong for him.

Two months after my graduation, on the day of my dad’s wake, I went for a check-up with my original gastroenterologist who had just received new blood work results. All that time that I had been quietly suffering—going from an already light 105 pounds to a concerning 73 (I should mention that I’m 5’8”)—it felt like no one understood how sick I was, or how much pain I was feeling all the time. Finally, I had concrete evidence. My inflammation markers, which in a healthy person should have been under 10, were at 97.

My doctor told me there was one last drug he wanted to prescribe, and if it didn’t work the next step would be surgery to remove the damaged part of my gut. He prescribed a powerful immune-suppressor called Humira. The syringes had to be overnighted on ice so I had to plan to be home to receive them every two weeks. I spent six months gaining back some of my strength and weight, and slowly coming to terms with what I wanted to do with my life. My dream of acting professionally had become a faint memory, but I knew I had to go for it while my health was on the upswing. I set a date to move to Los Angeles, just hoping that Humira would keep me ‘healthy’ long enough to give it a decent shot. But as with any drug of that strength, its side effects were equally as potent, including terrible eczema, dermatitis, hair loss, and infections; all awesome things for an actor just starting out. Those side effects waxed and waned every week, but I was still fortunate enough to book a role on an NBC show called Siberia. For any other actor this would have been the day they dreamt about their whole life: filming their first series regular role. For me it was a quick drop from extreme excitement to extreme worry. The show was going to film in Canada, and I had no idea how I was going to get my medicine across the border or what I would do if I ran out since it could not be shipped internationally. It seemed like no matter what I did my disease would always be pulling me down.

In the end, by jumping through a lot of TSA hoops, I was able to bring my Humira to Canada and film my television debut. And around the same time, my college sweetheart (and long distance boyfriend) proposed to me. So, while filming full days in negative 10 degree weather in Winnipeg, I was also planning a wedding in Louisiana set for a mere two days after my role wrapped. Needless to say, it was the perfect storm for stress, and one week after my honeymoon I was back in the ER with an inflamed and blocked intestine.

During our engagement, my husband heard Mark give an interview on a podcast that convinced him to buy The Primal Blueprint. He had changed his whole lifestyle after reading it, and when I was finally discharged from the hospital, I went completely Primal. It wasn’t an easy process. The eczema and psoriasis seemed to intensify at first, but I was vigilant and kept following the Primal guidelines. About six months later, when a paperwork mix-up on the part of my insurance lead to my Humira shipment being delayed, I was sure a flare was right around the corner. But that temporary delay turned into a week without my injection, then a month, and now a year. 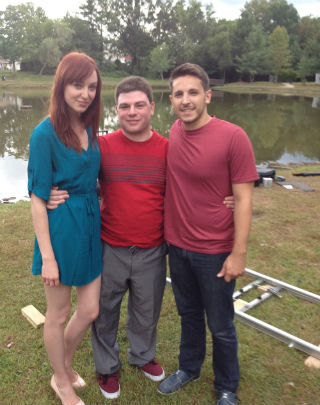 This is me now, after filming a scene for an independent film. I’m off all my medicines, feeling amazing and back to 110 pounds!

That’s right. It has been an entire year since I’ve been on medication of any kind! This is not only my letter to Mark and everyone at Mark’s Daily Apple, but also to myself. I am no longer beholden to a pill or a syringe. I am not controlled by my disease, and my body is happy and healthy for the first time in my life (every single Humira side effect has vanished).

I realize now that my career and my dreams don’t have to be put on pause due to my Crohn’s and for the first time my health isn’t fighting against my hope for a fulfilled life. And it feels amazing. No one should have to go through everything that I went through when the solution is possibly so simple. What you put into your body, affects your body. When the math is so clear-cut, how does anyone not treat themselves better? I want so much for my story to give hope to those who feel like they’re living in the dark, with no options left. Because there is a better way to live. Thank you for helping me see it.