How Much Meat Is Too Much? 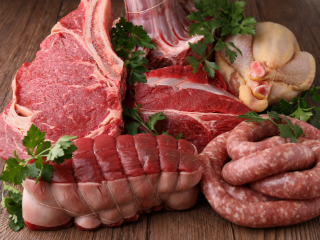 I’ve discussed—and countered—many misconceptions people hold to be true about the Primal lifestyle. That we wear loin cloths and shun modern medicine (I only do one of those), eat so low-carb all the time that running our urine through a coffee filter produces valuable ketone esters (stay tuned for the supplement!), and avoid cardio to the point of scolding ourselves if we have to run to catch the train (only if we jog rather than sprint). One in particular has stuck: that we’re meat-obsessed.

This one isn’t totally unfounded. We do enjoy our bacon, our steaks, our lettuce-wrapped burgers, our legs of lamb, our roast chickens. Personally, I emphasize the animal foods (which include “meat”) for two reasons: they’re extremely nutrient-dense and they’ve gotten a terrible rap for decades. We should be eating them on a regular basis but, by and large, people are scared to. There’s always that voice in your head repeating back to you the scary “red meat will give you cancer” or “meat consumption linked to diabetes” headlines that pop up every few weeks. I consider it my job to remove the stigma of healthful animal foods, to highlight the importance and vitality of meat in the human diet.

Let’s ignore the outliers. The folks who really do feel better on all-meat diets and the people who insist they thrive on zero-meat diets aren’t relevant today. The people who matter are the people reading this post. People trying to lose some body fat. People following a strength training regimen. Elderly people. All the different contexts in which people find themselves can affect our upper limit of meat.

Strength training’s relationship to protein intake is a curious one. Lifting heavy things actually makes you more efficient with your protein. As long as you’re lifting, you do more with less. You can get away with eating less protein.

On the other hand, lifting weights makes higher doses of protein safer. Animal studies show that large, acute increases of protein intake can stress the renal system and cause metabolic disturbances.  Left unchecked, this is dangerous. If the animals are performing resistance training, however, the kidneys can handle larger doses of protein without issue. Humans seem better adapted to higher protein intakes (it doesn’t harm our kidneys unless they’re already damaged), but I’d imagine the protective effect of resistance training is similar.

What this means is that strength training both reduces your protein requirements and increases the amount of protein you can safely utilize. Weird, right? You can eat more, but you don’t necessarily have to.

As for the 1 gram per pound of body weight bodybuilder diets you hear about? Novices can probably benefit from higher protein intakes, as they have a higher “gains ceiling” and gain muscle fairly quickly. More experienced lifters who are closer to their ceiling and gain muscle more slowly (if at all) don’t need as much protein. 1.8 grams per kg seems to be the absolute ceiling for natural lifters. After that, the benefits level off and you’re just wasting protein.

The more you cut calories, the more protein you need. And not in a relative sense—you need to increase your absolute protein intake to limit loss of lean muscle mass.

Protein metabolism is less efficient in the elderly. The standard RDA of 0.8g/kg simply doesn’t cut it. In fact, it leads to lean mass loss, atrophy, and poor health outcomes. To attain the same metabolic outcomes you enjoy, your grandma or grandpa has to eat way more protein than you. Studies indicate that a baseline intake of 1.0-1.3 g protein/kg bodyweight or 0.5-0.6 g protein/lb bodyweight is the bare minimum for the healthy and frail elderly to ensure nitrogen balance. 160 grams of red meat per day seems to do the trick alright, but 220 grams per day might be even better! That’s grams of meat, not protein.

When you’re on bed rest recovering from an injury, or a burn, or surgery, you not only can handle more protein. You need more protein to get better. We use protein to rebuild damaged tissues. Collagen comes in handy here, as skin is primarily made up of collagen. One study found that in patients recovering from ulcers, collagen supplementation sped up healing time.

Bed rest increases protein upper limits. When you’re not using your muscles, when they aren’t receiving any stimulus, you’re telling your body you don’t need them. That’s a terrible message to be sending. Added protein muddles the message and reduces the breakdown of muscle tissue.

What about the problematic compounds found in meat that detractors are always highlighting? Do those determine how much meat is too much?

Let’s look at some.

Iron isn’t “bad.” Like anything else, it’s conditionally good and conditionally bad for us. Our red blood cells employ iron to help them fulfill their primary role: the delivery of oxygen to tissues and cells throughout the body. In athletes, kids, infants, and ladies with kids in their bellies, iron is particularly important. Pregnancy and development increase iron demands, as does exercise. We literally cannot live or create life without adequate amounts of iron in the diet.

But an excess of iron is bad. As an oxidant, too much iron poses major issues. Observational studies link iron intake and stored iron to diseases and disease states like type 2 diabetes, heart disease, insulin resistance, inflammation, Alzheimer’s disease, hypertension, fatty liver, hypothyroidism, arthritis, and cancer. These types of studies can’t establish causation, of course, but they’re consistent. And we know that men with iron excess who reduce it through blood donation see improved health markers, including insulin sensitivity and liver enzymes.

Iron from animal sources like beef, lamb, and organs is far more bioavailable than iron from plant sources. It’s called heme iron, and we absorb almost all of it. Only about half of non-heme iron is actually absorbed. Furthermore, many common foods, like coffee, tea, plant polyphenols, and dairy readily inhibit our absorption of plant iron. The only real way to inhibit heme iron is to eat large amounts of calcium alongside it.

The recommended daily intake of iron is 9 mg per day for men, 18 for menstruating women. For pregnant women, it’s 27 mg. However, that presupposes that most of the iron you eat isn’t very bioavailable (remember the absorption inhibition). Many common foods and drinks, like coffee, tea, polyphenols, and calcium, reduce non-heme iron absorption. Many people get their iron through plant foods and fortified grains, so they aren’t absorbing all the iron they’re eating. People who get most of their iron through meat probably need less than 18 or 27 mg because they are absorbing most of the iron they’re eating.

Kids, teens, tots, infants? Don’t worry about eating too much iron in meat. I don’t want to see any 15 month olds freaking out about the heme iron content in the incomprehensible meat-mush caked across their faces.

Pregnant ladies? “Too much iron” should not be a factor when considering how much meat to eat.

Men and post-menopausal women? Monitor your ferritin levels and see how meat affects it. A 40-60 range might be ideal, as drops in insulin sensitivity have been seen at slightly higher levels, but that figure isn’t set in stone.

If you have hereditary hemochromatosis, an iron-storage disorder characterized by high iron accumulation, limit high-iron meat. Track your ferritin levels (you’re probably already doing this). You can still eat red meat, just be mindful of its effect on your iron levels and adjust intake accordingly.

Methionine is an essential amino acid, meaning we can’t synthesize it and must obtain it from the diet. It’s most abundant in animal foods, particularly meat (and egg whites). The “calorie restriction for longevity” crowd has zeroed in on methionine as the big dietary baddie in the fight against physical death, citing tons of animal studies in which methionine excess spikes homocysteine levels and reduces lifespan.

If you’re not eating egg yolks (choline and betaine), spinach (betaine), liver and greens (folate), and collagen-rich meats and supplements (glycine), your upper limit of muscle meat is probably lower. If you are eating those foods, you can get away with more meat.

Okay, okay. Got any numbers, Sisson?

If you’re older, on bed rest, dieting, you can safely eat more.

If you’re lifting, you don’t have to eat more but may want to.

Monitoring your ferritin levels will allow you to identify your safe upper limit.

Still worried? “Meat” doesn’t have to be red meat, or even terrestrial meat. You can—and should—mix it up with fish, shellfish, cephalopods, birds, even insects.

There are no hard and fast answers. There is no single number that’s right for everyone. It depends on many factors. In biology, that’s typically the case. But hopefully, you feel equipped to tailor your meat consumption to your personal context.

So: do you? Let me know how this post resonates with you. If you have any further questions about upper intakes of meat, let me know down below!