How Long Does It Take for Fitness Benefits to Show? 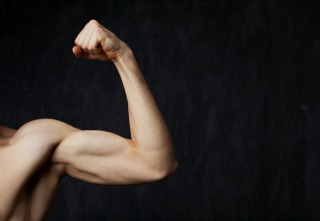 A big reason most people never stick to a serious exercise routine is that the benefits most people are interested in take a while to appear. Fat loss, muscle gain, boosts to strength, speed, and stamina—these physical manifestations of training adherence can take weeks and even months to show. That’s plenty of time for folks to give up, convinced exercise is just not for them.

I get it. I do. But that’s not a valid excuse for not exercising. You know it’s important, you know what the benefits are, and I’m not going to sugarcoat things: training is not optional.

So while we can’t really change when the benefits appear, we can change our expectations of the benefits, making them more realistic and limiting our disappointment when they fail to show in our preferred timing.

So when can we expect some benefits from our hard work?

Some benefits “show” immediately as long as you have the right tools to test them. If you were to take a muscle biopsy, you’d see that muscle protein synthesis—the incorporation of protein into muscle fibers, the first signs of muscular hypertrophy—begins just four hours after you lift something heavy.

If you were to sample some bone marrow after a single bout of resistance training, you’d notice that you just upregulated production of the cells that heal your endothelial lining.

If you were to hold a stethoscope up to your hamstrings immediately after a sprint session, you’d hear the *pop-pop-pop* of new mitochondria being spawned.

But those aren’t visible to the naked eye, nor are they accessible to the masses. We don’t feel our bone marrow pumping out progenitor cells. Amazon doesn’t sell muscle biopsy kits.

What benefits can we expect (and notice) immediately?

Fat oxidation: Many types of execise will boost the amount of fat you burn over the course of a day. Sprinting, high-intensity intervals, and even doing moderate aerobic activity before breakfast all increase 24-hour fat oxidation.

Insulin sensitivity: A single bout of intense exercise—lifting, running, sprinting, CrossFit—will deplete glycogen and improve your insulin sensitivity. You can’t “feel” that, but you will notice the improved postprandial blood sugar, as well as the ability to consume more carbohydrates without gaining weight the next day.

Endorphins: One immediate benefit is the release of endogenous opioids, also known as beta-endorphins. Studies indicate that it takes about an hour of endurance training for beta-endorphins to release (the runner’s high), while short-term anaerobic training produces similar effects in even less time. One study found that an acute bout of low-volume, high-intensity Olympic weightlifting caused elevations in beta-endorphin. High-intensity anaerobic work produces the biggest endorphin rush for your buck.

Neural strength: Improvements to neuromuscular efficiency happen within days of starting a lifting program. Beginners get stronger almost immediately simply by learning proper technique and how to fully contract the muscle fibers they already have.

Sleep: Exercising in the day has a modest but beneficial effect on sleep that night.

What benefits can we see later?

Improved body composition: Thanks to improved insulin sensitivity, better glycogen storage (and depletion), increased fat oxidation, and preservation of lean mass, you should start seeing or feeling the first hints of real positive developments in your body composition after about a week. Remember: whether you’re sprinting, lifting, jogging, or all three, exercise is most effective at improving body composition when paired with healthy eating.

Hypertrophy—actual increases in muscle size—needs a few weeks to get moving. It actually takes longer to develop size than strength, though not as long as you might think.

In one study, training the forearms to failure 3 times a week led to a 0.1 cm increase in forearm thickness at 2 weeks and another 0.1 after 4 weeks.

Another study had subjects do leg extensions for 12 weeks. They got stronger and grew muscle up through the first 8 weeks, but the last four weeks’ strength gains were almost all neural rather than structural.

Your dominant limbs will probably gain strength faster than your non-dominant limbs, even if you train them equally. There shouldn’t be any difference in size gains, however.

All in all, hypertrophy doesn’t hit its stride until the 8-10 week mark.

As for endurance adaptations, it takes about eight weeks of exclusively low-level aerobic work to build a strong aerobic base. That forms the, well, base of the Primal Endurance program.

You can improve your VO2 max in two to four weeks using intense intervals, two weeks using 4-6 30-second all-out sprints 3x a week (or five weeks sprinting once a week), or continuous endurance training. Running half-mile intervals at full mile race pace is a good way to increase VO2 max fast, if you’re really into it.

Bone mineral density (BMD): Resistance training and high impact exercise maintain bone mineral density, but they can also increase it in elderly, middle-aged people, or anyone who needs it. In older adults, six months is enough to increase BMD, though most BMD studies last a year or two. In one study, overweight Latino kids needed 10 weeks of whole body vibration training for bone resorption to drop, a necessary precondition for increasing bone mineral density.

Whatever you do, don’t take these numbers as gospel.

People respond differently to training for a variety of reasons….

Genetics, for one, plays a role in how—and when—you respond to training.

Prior training status also changes things up. If you’re untrained, you’ll likely see faster results. A complete novice just getting into lifting weights can expect to add 5-10 pounds to the bar each workout for the first few weeks; that’s real strength. If you’re an experienced fitness buff, you’ll need more time. If you’re experienced but coming off a long layover, you’ll see a quick rebound—quicker in many cases than the untrained see.

Age is another factor to consider. The older you are, the longer it’ll take you to respond to training—in general.

Most importantly, consider that these studies report data only for subjects who follow the study protocol and do not drop out. The folks who don’t follow the program aren’t included in the results. So when I say 8 weeks is enough time to gain several pounds of lean mass, I’m talking about people who spend 8 weeks training three times a week, never skipping a workout and never training anything else.

That’s not you. You’re juggling work. You’re cooking dinner. You’re trying to squeeze in enough time to make it to the gym, or the CF class, or the track, or the trail. If you want to skip a workout, you can. There’s no research scientist compelling you to complete the program.

You’re also not doing just sprints or just weights or just endurance. You’re likely taking walks, lifting some heavy things, playing games, biking on the weekends, running a mile, doing a circuit. No one study can encompass the context of your life and the heterogeneity of your training.

A single workout can make you happier, sharper, and stronger. It can help you sleep, clear space in the muscles for glucose storage, and have a healthier response to food.

Then you do another one two days later, and those benefits only increase.

And another. With even more benefits.

My point? Don’t get hung up on the concrete benefits. They’re coming, and some of the best ones are already here. Let the training work. Just keep doing it.

Thanks for reading, everyone. As we approach the home stretch of the Challenge, I’d love to hear from you. What benefits have you noticed so far?